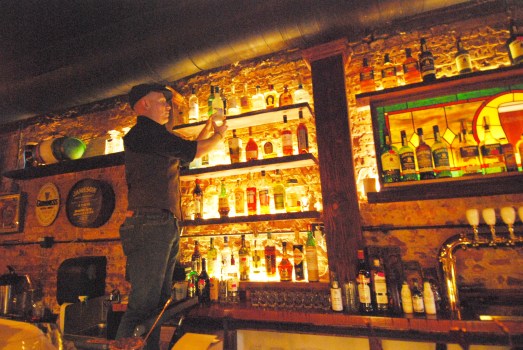 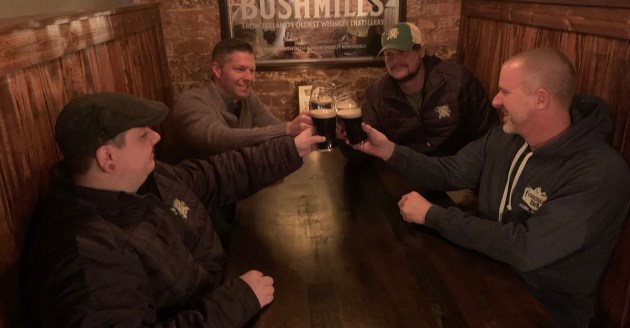 KANNAPOLIS — There is hardly more hallowed ground in Ireland than the local pub, and with Gaelic Alley’s official opening, Kannapolis will have a proper pub to call its own.

Partners Justin Lawrence, Jordan Young and Brian Schmidt’s endeavor to bring an authentic Irish pub to Kannapolis has been years in the making.

“It was a long road,” Lawrence said.

Although they had initially planned to be open for St. Patrick’s Day in 2022, setbacks emerged.

The pub’s name is derived from the Irish influence and the fact that the space was previously an open-air alleyway. The alley was walled in years ago to make a restaurant called Tar Heel Lunch that served workers at the Kannapolis mills.

“We tried as hard as we could to keep a lot of the original elements of the building here so that when you walk in, you could feel that history as you walk through,” Young said. “We thought it would be cool to match the pub theme with the historical theme of the actual building itself.”

Schmidt added, “We have a lot of historical photos from the Kannapolis Historical Society that they provided to show the history of this spot.”

With plenty of personal trinkets and other Irish paraphernalia, the pub owners had no shortage of things to stick up on the walls of Gaelic Alley.

“We mixed the artwork up in the pub with old Irish photos from trips to Ireland,” Schmidt said.
“Irish pubs are usually full of a lot of stuff, pictures, memorabilia, jerseys, that kind of stuff. We tried to clutter it up with that to make it as authentic as possible.”

Lining the walls are vintage posters representing the drinking gamut from Guinness to Bushmills to Jameson.

Lawrence indicated that each detail was decided on for a purpose.

“We wanted to make it as much of a warm hub as possible,” Lawrence said. “The exposed brick. The lighting. All that. How small it is. You feel like you are here with friends.”

Schmidt added, “We are trying to build a traditional Irish snug. In the early 1900s, in Ireland, women weren’t allowed to be in pubs, so each pub would build a snug to hide them, so they were visible.”

A snug has to be a private spot that is closed in on all sides. They use curtains or walls and would have a pass-through for the barkeep to get the ladies a drink.

In addition to the authentic decor, the pub boasts a wide variety of Irish drinks.

“We have all the major Irish beers, Harps and Smithwicks,” Schmidt said. “We also have Murphy’s, another stout that competes with Guinness. It is from Southern Ireland.”

While everyone has probably heard of Guinness, fewer have acquired the taste, as evidenced by the Gaelic Alley’s initial attempts to obtain the famous beverage.

“Our distributor didn’t even carry Harps in a keg, or Smithwicks in a keg,” Lawrence said. “They really didn’t carry Guinness. They would borrow it from another distributor because there was just no one really in this county that would ever order it. When we first opened, they cut a deal with a distributor in Charlotte to get four kegs of each over to see if we went through it. We far surpassed those expectations.”

The owners found a successful formula as Kannapolis residents are taking notice.

“The town piles in every day,” restaurant manager Anthony Palmer said. “We have people knocking every day before we are even open.”

Given the restaurant’s dimensions, the owners have to get creative.

“One thing about this pub is that it fills up quickly,” Lawrence said. “We are working on getting a system so we can page people. They can get a drink to go since we are part of the social district.”

They might not have been ready for last year’s St. Patrick’s Day, but they will be for this one. However, Schmidt indicated that they were keeping those announcements under wraps for now.
Gaelic Alley is located at 114 South Main Street. It opens at 3 p.m. on weekdays and 11 a.m. on the weekends.