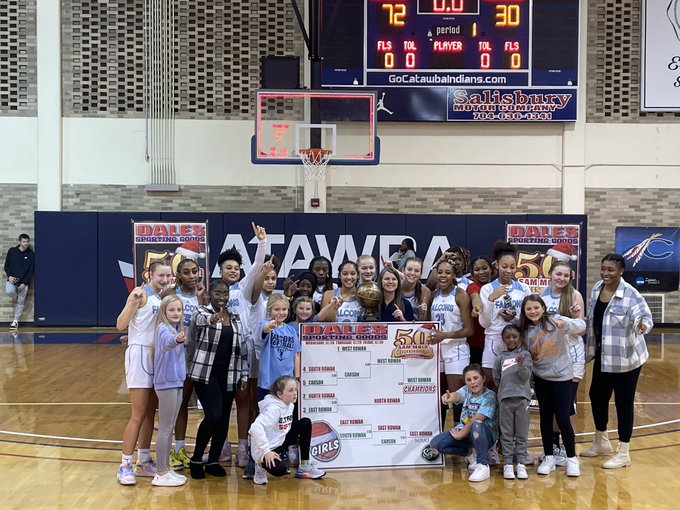 “I was pacing around, but thank goodness I was the only one the delay bothered,” Poole said. “When our girls went out there for the championship game, they were ready to play.”

You can say that again.

Fans at the Dale’s Sporting Goods Sam Moir Christmas Classic witnessed a running-clock championship game. DeDe Cuthbertson’s layup with 3:18 left in the third quarter gave the Falcons a 63-23 lead. A 40-point spread is the magic number for the running clock.

The top-seeded Falcons quickly finished off a 72-30 victory against second-seeded North Rowan.

West Rowan (10-0) is second in the 3A West RPI rankings, behind East Lincoln.

Explosive West has won its last five games with running clocks. West averages 73.3 points per game, but without the running clock mercy rule which was implemented prior to the 2014-15 season, the Falcons might be averaging 90. Seriously. They appear to be a well-oiled, multi-dimensional machine, equally lethal on offense and defense.

North Iredell and Davie did very well in their respective Christmas tournaments. West destroyed them.

Poole, of course, isn’t looking ahead. Coaches can’t look ahead to the playoffs because lots of things can happen. People can get hurt. People can lose focus. Unforeseen things can happen — like the fight at Northwest Cabarrus that disrupted West’s 2021-22 season. So Poole only thinks about tomorrow, only worries about the next game.

North Rowan (8-3) has a good team. The Cavaliers beat East Rowan by 44 in the opening round, and East has a winning record.

North lost 67-27 to West earlier this season, but Poole still scouted the Cavaliers diligently for the title-game rematch. She watched North’s first-round game with East. Brittany Ellis was huge in that game. North didn’t have a healthy Ellis when the Cavaliers played West the first time.

“Getting Brittany back made a difference for North and we knew it would,” Poole said. “They looked very good against East. Brittany can shoot and when she gets hot, she’s really hot. That’s one of the things we emphasized for the championship game. Don’t let Brittany get hot.”

An even higher percentage of North’s offense is guard Bailee Goodlett, the county’s leading scorer. West held her to a season-low 13, mostly by limiting her to three steals. She’s capable of getting 10 thefts.

“Bailee is just so quick — I don’t know that there’s anyone quicker,” Poole said. “When you play against her you have to understand that she gets so much of her offense off steals. She scored 29 points against East, and 20 were in transition. You have to be aware of where she is all the time and you have to take care of the ball. If you see Bailee coming, trust your teammates and pass the ball ahead.”

Bloom Goodlett scored 10 for the Cavaliers, but there was no way for North to stay in the game against such superior firepower. West is much bigger and much deeper.

Tournament MVP Lauren Arnold  scored 16 to lead the Falcons. There may be people more spectacular than Arnold, but she’s  as consistent as the sunrise. She’s scored between 10 and 20 in every game this season. She’s West’s leading scorer at about 15 points per game, but she’d have much bigger numbers if the Falcons weren’t blowing everyone out.

“Lauren is steady as she goes,” Poole said. “Gets position for offensive rebounds. Makes shots. Does it every night.”

West had its usual balance — 11 from Makaylah Tenor, 10 from Tiara Thompson, nine points (and nine rebounds and a lot of defense) from Jamecia Huntley, eight from Cuthbertson and seven each from Emma Clarke and De’Mya Phifer.

Bailee Goodlett and Ellis made all-tournament for North.

North senior Chloee Stoner won the RONZ Award, given in memory of Ronnie Gallagher, the long-time sports editor of the Post. The RONZ recognizes sportsmanship, determination and character.

For Poole, it was career victory No. 154. She’s in her 10th season. She’s had more wins that any head coach in program history and passed the late Gina Talbert (East) during the tournament for seventh place all-time in Rowan County.

It was Poole’s second Moir championship. The first came in 2019 when the Falcons won with a crew of seniors led by Abigail Wilson.

No champions were crowned in 2020, the COVID season, or in 2021 due to the shooting incident during last year’s tournament.

West seniors Cuthbertson and Sarah Durham were freshmen on that 2019 squad, so they also earned their second championship.

“I guess it’s back-to-back for us,” Poole said. “It always feels good to win, so proud of the girls and happy for them. And it was good to see the Christmas tournament make a comeback.This was the first time I’ve been back here since the night of the shooting. Security did a great job, and I felt very safe. It was good to get back to normal.”

Well, almost normal. Salisbury wasn’t there, so fans didn’t get to see a potential game of the century.

But fans did get a first-hand look at the Falcons, one of the state’s best teams.