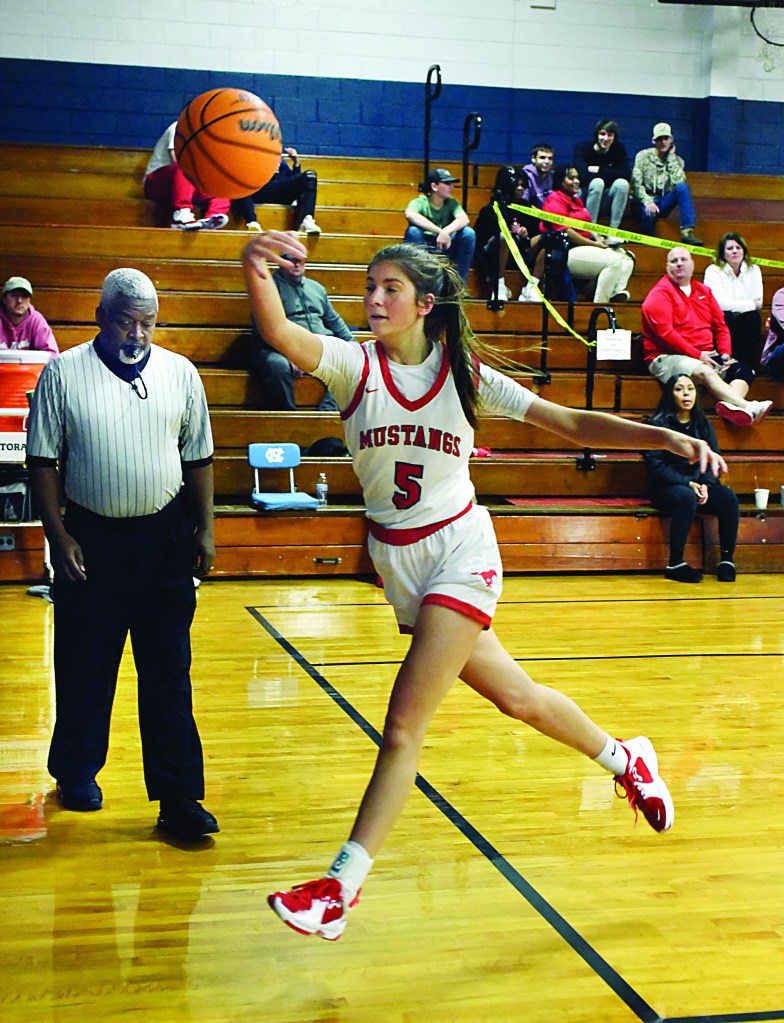 East's Lindsey Cook.Photo by Wayne Hinshaw, for the Salisbury Post

Just try to get it close.

Carson and East Rowan were both playing for the third day in a row, and that probably had something to do with their struggle on those unguarded 15-footers.

“We missed 21 free throws, sighed Carson coach Brooke Stouder. “That’s the difference in the game. We missed 11 free throws in the first half, and if we make five or six of those, it puts us in a totally different frame of mind.”

The Mustangs (6-5) took a 22-15 lead to halftime and forged ahead by double digits in the third quarter. Cougars (2-9) were making a parade to the foul line, but often came up empty.

“We were just gassed in the second half,” Stouder said. “It’s the first time this group has played three games in three days and it showed.”

Hannah Waddell led East with 12 points. She made three 3-pointers and scored 11 before the break to get the Mustangs that halftime lead.

Nine Mustangs scored. East needed every point it could muster with Mary Church, an important ball-handler and scorer, missing from the lineup.

The Mustangs also won back-to-back in the tournament, and any year you can win two in the Moir it’s a positive.

‘Well, we won six games all of last season and now we’ve already won six this year,” Evans said. “Glad we could pull another one out.”

East will return to action in the South Piedmont Conference with a 3-0 record. That 3-0 includes a pretty nice road victory at Northwest Cabarrus.

Stouder’s Cougars went 1-2 in the tournament, but they’ll take it. Besides winning against South Rowan, Carson was able to play a competitive game with the Mustangs.

“Great win for us here on the first day and we were right there today if we can make a few free throws,” Stouder said. “We’ll keep working.”