High school boys basketball: Falcons back on top in Moir 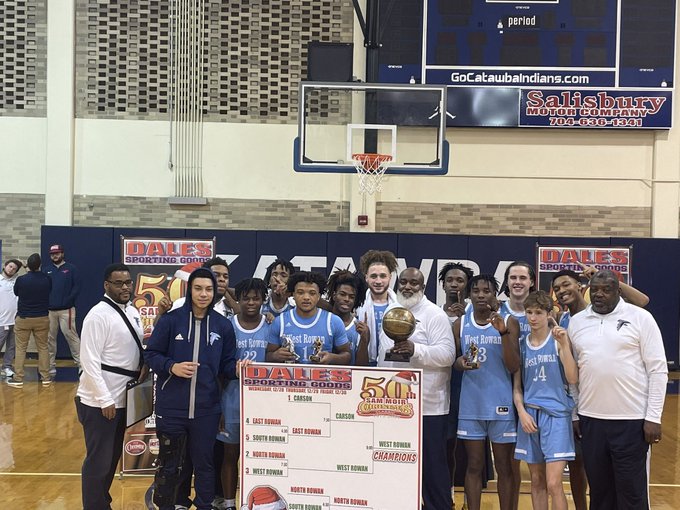 Athan Gill and Will Givens Jr. both were averaging 20 points per game, so every scouting report on dealing with the Falcons had to start with boxing out the powerful Gill and running Givens, a deadly sniper, off the 3-point line.

Carson executed the “scout” well in Friday’s championship game, holding Givens to 14 points and Gill to 13. Those totals would have meant victory for the Cougars except that West point guard Kayvone Norman, who was averaging 8 per game, got 17.

“Norman is a very good player,” said Dadrian Cuthbertson, a winner in his Moir debut as a head coach. “Coming off the football field (Norman was a strong running back), it took him a while to get in basketball shape, to get those basketball legs. But he’s gotten better every week and he’s helped our team get better.”

Givens, who had 18 in a win against North Rowan on the first day, joined Norman on the all-tournament team.

The tournament championship was the 13th for the Falcons, one fewer than Salisbury. North is third with nine boys titles.

West’s girls also won a Moir championship. It’s only the second time both West teams have won in the same year.

The other time was in 1992, when Cuthbertson was the MVP for the West boys. He totaled 42 points in wins against North Rowan and Salisbury.

“I told our guys I was the MVP of this tournament 30 years ago,” Cuthbertson said. “They were laughing about it. To them, 1992 is so long ago, ancient times.”

Strange as it sounds, West is the first Rowan team to win the Moir since Carson took home the title in 2017.

West, which won as the No. 3 seed, is back on top for the first time since 2016 when Caleb Mauldin led the Falcons to victory.

It wasn’t easy. Carson has a good team and was the top seed based on pre-Christmas records.

West and Carson both exited the tournament with 5-5 marks, but the Falcons definitely are surging after an 0-5 start.

“I wasn’t that worried, even at 0-5,” Cuthbertson said. “We’d lost close games to good teams, and I still felt like we would have a good team. We just had to keep grinding. Our guys did.”

“He’s a key guy for us, but he’s been limited by an injury that has kept him from practicing,” Cuthbertson said. “He’s an important guy for us. He can score and he defends well.”

Youngster Romir Hairston had his best game, chipping in with eight points, and freshman Brant Graham contributed a 3-pointer.

West got off to a stellar start against Carson. The Falcons got after it on defense, holding Carson to five points in the first quarter and getting out to a 13-5 lead.

Carson got a big second quarter from Jay McGruder to stay in the game and started to settle in, but West led 34-20 at halftime.

The Cougars heated up enough to score 41 points in the second half. They made it a game, but they couldn’t catch up.

“When you play Carson, you can’t really try to take away one or two guys because it’s different guys for them on different nights,” Cuthbertson said. “Coach (Brian) Perry’s teams are good at the drive-draw-and-kick game, so that’s what you try to take away. You have to stay in front of your man, so no one has to leave their guy to help. In the first half, we did a nice job defensively. The second half, we fouled a little too much on the drives and they made more 3-pointers.”

Jonah Drye led the Cougars with 19 points. McGruder finished with 15. They were the big scorers in both of Carson’s tournament games and represented the Cougars on the all-tournament team.

Senior Emory Taylor, who scored 12 points, won the RONZ Award that is given in memory of the late Ronnie Gallagher, longtime Post sports editor. The RONZ Award recognizes sportsmanship and character.

Amari McArthur, a senior from third-place North Rowan, was the other all-tournament selection by voters.