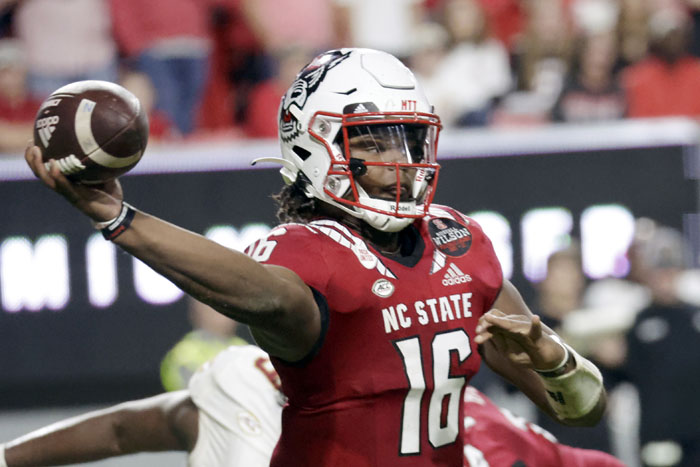 CHARLOTTE — North Carolina State coach Dave Doeren remains non-committal as to who’ll start today at quarterback for the 25th-ranked Wolfpack when they face Maryland in the Duke’s Mayo Bowl.

“Why would I tell you that?” Doeren said with a coy grin during the bowl’s media day Thursday at the Charlotte Convention Center.

Freshman MJ Morris, who started two games this season before suffering a lower body injury on Nov. 12, would likely be the starter if he’s healthy enough to play. But Doeren declined to comment on Morris’ status for the game. Ben Finley and Jack Chambers have also started games for NC State after its season was sent into a tailspin when highly regarded starting QB Devin Leary tore his pectoral muscle on Oct. 8.

Leary has since transferred to Kentucky.

Maryland coach Mike Locksley said it’s difficult to know what to expect from the Wolfpack with the uncertainly at quarterback and given the departure of offensive coordinator Tim Beck, who left to take the head coaching job at Coastal Carolina. Robert Anae has been hired as NC State’s new OC, so the play calls could be completely different.

Locksley said the Terrapins have been preparing for everything. “I think the biggest concern is the unknown,” he said. “Everybody knows that when you have three weeks to prepare. … You know Robert is over there and you’re wondering is he implementing any of his stuff from (working at) Syracuse, or what are they doing?”

Maryland quarterback Taulia Tagovailoa has been following the situation closely with the Miami Dolphins, where his brother Tua is back in the concussion protocol for the second time this season.

He said he’s worried about his brother’s health, but also understands his desire to get back on the field.

“I want him to always be safe, but at the same time play the game that he loves and do what he loves to do and see him happy,” Tagovailoa said. “In life, I feel like we all have to make those tough decisions. Regardless of what he feels like doing at the moment, there are lot more years and a lot of more time, too. Because he’s still young.”

N.C. State was expected to challenge for the Atlantic Coast Conference title, but the injury to Leary was a crushing blow and the Wolfpack finished 8-4 with disappointing losses to Syracuse, Boston College and Louisville in the second half of the season.

“I don’t know if you can really knock our team for the season that we have had just because of the circumstances that we faced,” said Wolfpack linebacker Drake Thomas. “Leary goes down and people are like, ‘Are they going to even win another game?’ I think the perseverance of our guys showed.”

Both head coaches have agreed to take the traditional “mayonnaise bath” if their team wins the game. That means the winning coach will be seated on the field after the game and have a large bucket of mayonnaise poured over their head.

“I will do anything if it entails winning,” Locksley said. “If you do it because you win, I want to do it. I have no problem with it.”

Locksley joked that he may wear an oversized hat called a Noggin Boss to help deflect the mayo.

The Terrapins have had three wide receivers — Rakim Jarrett, Dontay Demus and Jacob Copeland — opt out of the bowl game to begin preparing for the NFL draft. Demus finished eighth in school history in yards receiving with 1,775 and tied for second with seven 100-yard receiving games despite an injury that cut short his junior season.

Tagovailoa said those losses are tough, but feels Tai Felton, Jeshaun Jones and Octavian Smith are ready to step into more prominent roles.

“We still have young guys that are ready to step up,” Tagovailoa said. “They have been working hard and we’re ready.”

Both teams feature strong kickers. NC State’s Christopher Dunn is an All-American who won the Lou Groza Award given annually to the nation’s best kicker after converting 24 of 25 field goal tries and all 30 extra point attempts.

Maryland’s Chad Ryland made 16 of 20 field attempts this season, including three from beyond 50 yards.

North Carolina State: LB Drake Thomas. He’s the heart and soul of the Wolfpack defense. He has 90 tackles, including 15 for a loss, along with 6 1/2 sacks.

Maryland: QB Taulia Tagovailoa. The younger brother of Miami Dolphins QB Tau Tagovailoa, he threw for 17 touchdown passes and ran for four more scores. He has not thrown an interception in his last three games.

North Carolina State’s quarterback situation has been muddled with four different players starting at the position. Devin Leary entered the transfer portal following an injury and it’s unclear who’ll start for the Wolfpack. MJ Morris suffered a lower-body injury on Nov. 12. If he’s unable to play, Ben Finley could get the start. Finley completed 27 of 40 passes for 271 years and two touchdowns in the 30-27 double overtime upset victory against then-No. 17 North Carolina. … Wolfpack WR Devin Carter opted out of the bowl game to prepare for the 2023 NFL Draft. … Maryland was 6-2 before losing three straight games. The Terrapins closed the regular season with a win over Rutgers. … Maryland won the last matchup 41-21 on Nov. 30, 2013.