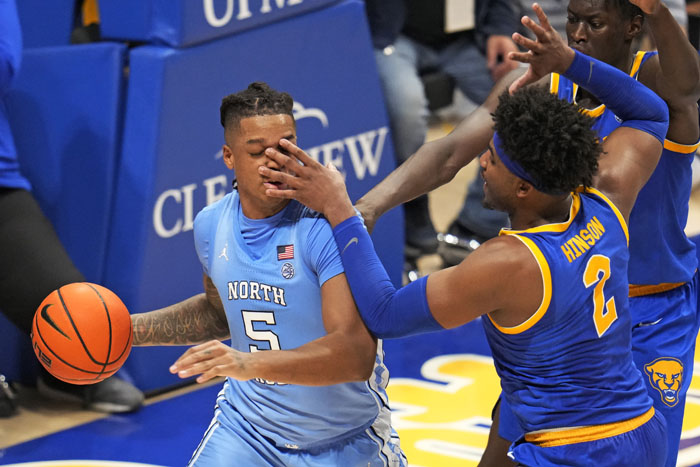 PITTSBURGH  — Jamarius Burton scored a career-high 31 points, Blake Hinson had seven points in the final minute and a half and Pittsburgh knocked off No. 25 North Carolina 76-74 on Friday.

Burton, a graduate student, was 14 of 17 from the field and had six rebounds. He helped Pitt (10-4, 3-0 Atlantic Coast Conference) win its fourth straight game and remain unbeaten in conference play.

“Jamarius was unbelievable through the whole game,” Pitt coach Jeff Capel said. “We rode him. He carried us. He made big plays. He defended. Just an unbelievable performance.”

“Nobody on our team could guard him,” he said. “(Pitt) stepped up and made plays down the stretch. Whether you’re at home or on the road, you have to step up and make those plays, and we just didn’t do it to win the game.”

Hinson put the Tar Heels away, making a 3-pointer from the right wing to give Pitt the lead for good 70-67 with 1:28 remaining, then extending the Panthers’ lead by making two free throws with 36 seconds left and two more with 28 seconds to go to make it 74-69.

“I’m really proud of my team,” Capel said. “We fought for 40 minutes. We knew (North Carolina was) playing really, really well. They’re as talented as any team in the country, but we fought. We got down early, we stayed together and we stayed fighting.”

Armando Bacot led North Carolina with 22 points, 13 rebounds and three assists. It was his eighth double-double of the season. RJ Davis added 13 points and Pete Nance chipped in with 10 points.

North Carolina took a nine-point lead, 55-46 with 11:55 to go on a dunk by Bacot. Pitt responded by outscoring the Tar Heels 19-7 over nearly an eight-minute span and moved in front with 65-62 with 3:59 left on a three-point play and layup by Burton.

Pitt won despite going just 5 of 25 on 3-point attempts after making at least 10 shots from beyond the arc in five of its last seven games. However, the Panthers scored 46 points in the paint in large part because of Burton’s drives to the basket.

“We just tried to stay even-keeled, stayed locked in and realized there are other ways to win a basketball game besides knocking down threes,” Burton said. “We just followed the scouting report and continued to fight for one another.”

North Carolina built a 26-17 advantage with 9:15 left in the first half on a pullup jumper by Caleb Love. However, Pitt went on a 13-4 run to tie the score at 30-all on a pair of free throws by Greg Elliott with 3:37 remaining.

Bacot nearly had a double-double by the break — 10 points and nine rebounds.

North Carolina: The Tar Heels seemed to be back on track by winning four games in a row following a four-game losing streak that dropped them from No. 1 to out of the Top 25. Friday’s game was a step backward.

“I’m upset. I’m frustrated. I’m not happy at all,” Davis said. “I was really encouraged by the way we were playing over the last four games. This was a great opportunity to build on that. It still is. I just wish that we would have been better.”

Pittsburgh: The Panthers have won nine of 10 games since opening the season 1-3, seemingly taking Capel off the hot seat.