‘Cards for a Cause’ campaign sends over 5,000 holiday cards to active service members, veterans 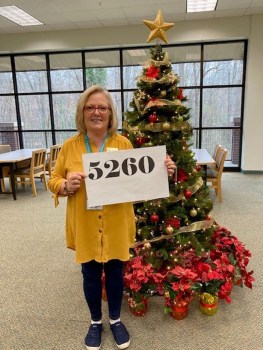 Tammie Foster of Rowan Public Library shows the final number in the Cards for a Cause campaign. submitted photo

SALISBURY —  Since 2015, the Rowan Public Library has hosted a campaign called “Cards for a Cause,” collecting holiday cards starting in the fall and delivering them to veterans and active service members in the Armed Forces.

This year, the library set a new record for cards received: 5,260. That surpassed last year’s total of 4,521. The cards represent all winter holidays, including Hannukah, Christmas and Kwanzaa.

Each of the library’s five branches participated in the campaign, setting up stations with free card-making and decorating supplies where people could come create their own card, then submit it. The YMCAs in Salisbury, China Grove and Rockwell also participated, setting up their own stations through Dec. 16.

But many residents opted to design their own cards, including 1,002 decorated cards from students at A.L. Brown High School’s National Honor Society.

“It’s always heartwarming to see the care that so many put into preparing their stacks of cards,” said Tammie Foster, a Rowan Public Library children’s associate who has coordinated the campaign for the past several years. “Our communities have been so awesome to contribute to this campaign and it impresses me every year.”

The participants of the campaign chose which branch of the military their cards were delivered to, such as to current service members in the Army, Navy, Marines, Air Force, Coast Guard and National Guard, or to veterans at the W.G. Hefner VA Medical Center.

Holidays can be a difficult time for those in the military who are away from their family and friends, Foster said.

To get the cards to the right people, Foster goes to recruiting offices in Rowan and Cabarrus counties and asks them to send the cards out to active service members or those in boot camp. She also visited a veterans luncheon at Christian Lutheran Church in Salisbury that is hosted every Tuesday and pitched those in attendance to send cards to other active service members they may know.

“It’s awesome to know that they were going overseas to encourage somebody that was away,” Foster said.