Brady, Bucs have NFC South title on the line in Sunday’s game against Panthers 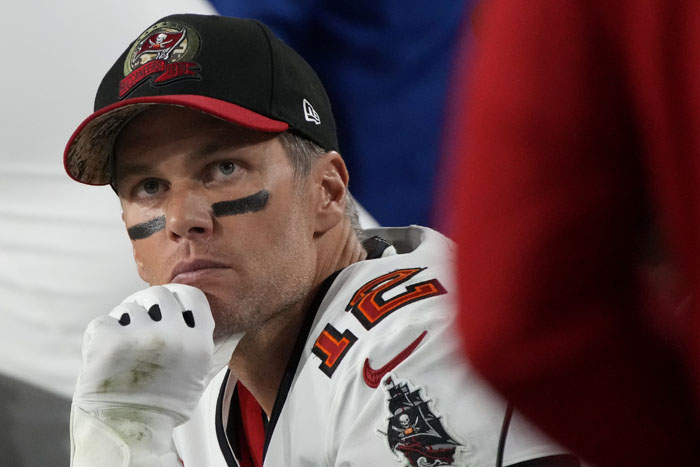 TAMPA, Fla. — The Tampa Bay Buccaneers and Carolina Panthers don’t have to sort through a bunch of potential tiebreaker scenarios to know what they need to do to win the NFC South and host a first-round playoff game.

Beat the Panthers on Sunday at Raymond James Stadium, and Tom Brady and the first-place Bucs (7-8) will repeat as division champions and earn a postseason berth for the third straight year regardless of what happens in the final week of the regular season.

Carolina (6-9), which has won four of its past six games to play its way back into contention after firing its coach and trading its best player, can claim its first NFC South title by closing with victories over Tampa Bay and New Orleans.

“We know what this game entails,” Panthers interim coach Steve Wilks said. “There is no reason to talk about it.”

“We understand what the game means. Trying to win a division is not easy,” Bucs coach Todd Bowles echoed.

“They need it and we need it, so it’s essentially a playoff game,” Bowles added. “Our playoff games started last Sunday when we won (in overtime at Arizona), so this Sunday will be the same.”

Carolina, which is 5-5 under Wilks, fired coach Matt Rhule after Week 5 and traded star running back Christian McCaffrey to San Francisco a few days before shutting down Brady and Tampa Bay’s sputtering offense 21-3 at home on Oct. 23.

The Panthers entered this week tied with New Orleans for second in the division, one game behind the Bucs.

Tampa Bay holds the advantage in any tiebreaker situation involving the Saints (6-9), who lost both meetings between the division rivals this season.

“I’m not in Tom Brady’s head, but he definitely remembers this game,” Panthers linebacker Shaq Thompson said. “We both know what’s on the line.”

Brady has won an NFL-record 18 division titles, all but one of them during a historic 20-year run with the New England Patriots.

The Bucs are trying to win consecutive division championships for the first time in franchise history.

“The important part is it’s something that’s earned. There’s nothing given. There’s nothing you really take for granted,” Brady said of having another opportunity to clinch a playoff berth.

“Every year is something different. I think obviously this year … we’ve dealt with some injuries, a lot of different lineup changes, some tough games, a lot of tough calls, close calls,” the 45-year-old quarterback added. “But we have an opportunity now to do something really positive. … It’s a big challenge. It’s a great opportunity. You don’t take it for granted.”

The Panthers are coming off a record-breaking offensive performance last week against the Detroit Lions, racking up a franchise-record 570 yards, including a whopping 320 on the ground.

D’Onta Foreman paced the ground attack with 165 yards rushing and a touchdown, while Chuba Hubbard ran for 125 yards. Those totals were career highs for both players. The Panthers’ offensive line completely dominated the line of scrimmage, freeing the backs for seven runs of 20 yards or more and an average of 7.4 yards per carry.

“That’s been the key to our success this season,” Foreman said. “When we’ve run the ball well, we’ve won games. When we haven’t, we’ve lost.”

Former Bucs coach Bruce Arians, who helped recruit Brady to Tampa Bay before leading the Bucs to a Super Bowl title two years ago, will be inducted into the team’s Ring of Honor on Sunday.

Brady said he’s happy for the retired coach, noting Arians was “a big reason why I came here.”

“He’s very deserving. He’s had an amazing coaching life and journey,” Brady said. “He’s been around some great players, some great coaches. He’s really built a winning foundation here, which is pretty spectacular.”

The Panthers lost Donte Jackson to a season-ending torn Achilles tendon earlier this season and now their other starting cornerback, Jaycee Horn, is coming off surgery this week for a broken wrist. With Horn out, C.J. Henderson and Keith Taylor will start at cornerback against the Bucs.

In the meantime, the Panthers have added a familiar face in veteran Josh Norman, giving them some experience and attitude in the secondary. The 35-year-old Norman was an All-Pro for the Panthers when they went to the Super Bowl in 2015. Wilks was his position coach that season.

Wilks believes Norman, who hasn’t played this year, could step in a play as a backup to Taylor this week if needed.

PINEIRO ON A ROLL

The Panthers have reason to be confident if the game comes down a field goal.

Eddy Pineiro has been fabulous for the Panthers since missing an extra point at the end of regulation and a field goal in overtime in a midseason loss to Atlanta, making his last 17 field goal attempts.

Pineiro has made 93.9% of his field goal attempts this season, which is third best in the NFL.

Tampa Bay’s Ryan Succop has made 85.3% of his attempts.

TURNOVER DIFFERENTIAL: Panthers minus-1; Buccaneers minus-4

PANTHERS PLAYER TO WATCH: RBs D’Onta Foreman and Chuba Hubbard vs. Bucs defense. Foreman ran for 165 yards and Hubbard added 125 yards rushing — career highs for both players — last week as the Panthers racked up a franchise-record 320 yards on the ground against the Detroit Lions. Carolina averaged 7.4 yards per carry and ran for three TDs. The Panthers had 27 carries for 173 yards in a 21-3 win over the Bucs in Week 7.

BUCCANEERS PLAYER TO WATCH: RB Leonard Fournette, whose role in the offense has been impacted by increased playing time for rookie Rachaad White, is coming off one of his strongest performances of the season. He accounted for 162 yards from scrimmage in last week’s 19-16 overtime win over Arizona, rushing for 62 yards and leading the team with nine receptions for 90 yards.

KEY MATCHUP: Bucs QB Tom Brady against a Panthers defense that held Tampa Bay to three points in the Oct. 23 meeting between the teams at Carolina. Brady has thrown for 4,178 yards, 21 touchdowns and nine interceptions, however the Bucs are only averaging 17.7 points per game. That’s 28th in the league.

KEY INJURIES: Panthers CB Jaycee Horn broke his wrist during last week’s win over the Lions and has been ruled out for Sunday. With Horn sidelined, C.J. Henderson and Keith Taylor will start at cornerback while veteran Josh Norman, signed last Monday, will come off the bench. Taylor struggled mightily two weeks ago against the Pittsburgh Steelers when pressed into duty. … The Bucs designated C Ryan Jensen to return from injured reserve, however coach Todd Bowles said he will not play against the Panthers. Jensen (knee) has been sidelined since the second day of training camp in July. Decisions on the status of RT Tristan Wirfs (ankle), LT Donovan Smith (foot), S Antoine Winfield Jr. (ankle), CB Jamel Dean (toe), DT Vita Vea (calf), WR Julio Jones (knee) and LB Carl Nassib (toe) may not be finalized until the weekend.

SERIES NOTES: The Bucs have won four of the past five meetings between the division rivals.

STATS AND STUFF: The Panthers can win the NFC South if they beat Tampa Bay and New Orleans to close the season. … Interim coach Steve Wilks is 5-5 since taking over for Matt Rhule, who was fired after Week 5. … Carolina is 1-5 on the road this season. … QB Sam Darnold threw for a season-high 250 yards and had two TDs (1 pass, 1 rush) last week vs. the Lions. Darnold is 3-1 as the team’s starter and has thrown four touchdown passes with no interceptions since replacing Baker Mayfield. … DE Brian Burns has 12 1/2 sacks and needs three more to break the team’s single-season record of 15 shared by Kevin Greene and Greg Hardy. … The Bucs can clinch their second straight NFC South title with a victory Sunday. … Brady is on pace to break the NFL’s single-season record for pass attempts. He’s thrown 671 passes through 15 games, 56 shy of the 727 Matthew Stafford attempted in 2012. The seven-time Super Bowl champion has 443 completions. He needs 43 more to break his own league single-season mark of 485 set last year. … WR Chris Godwin has five or more receptions in 12 straight games, the longest active streak in the league. He has 42 catches and two TDs in eight games vs. Carolina. … WR Mike Evans is 83 receiving yards short of becoming the first player in league history to begin a career with nine consecutive seasons with 1,000 yards receiving. … The Bucs are trying to win consecutive division titles for the first time.

FANTASY TIP: Panthers WR D.J. Moore looks for his third straight game with at least 100 yards from scrimmage against the Bucs. He led the team with five receptions for 83 yards with a touchdown last week against the Lions. Moore has scored in three of his past four games. Evans, meanwhile, has 37 receptions, averaged 94.2 yards per game and caught four TD passes over his past five outings against the Panthers.