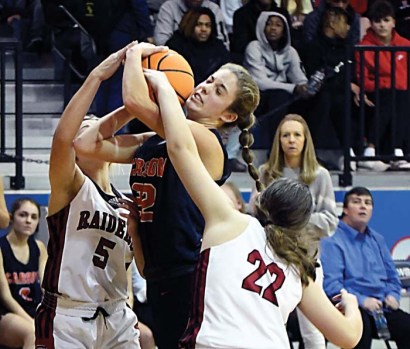 Carson's Allie Martin 22 gets tied up by South's Lexie Ritchie 5 and Hannah Atwell 22.. photo by Wayne Hinshaw; for the Salisbury Post. 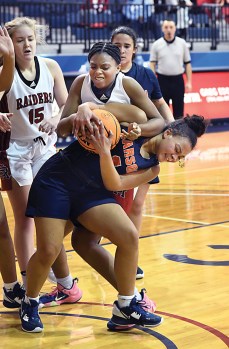 South's Ari Alston 12 and Carson's; Laila Furr 4 tie up for jump ball. photo by Wayne Hinshaw; for the Salisbury Post. 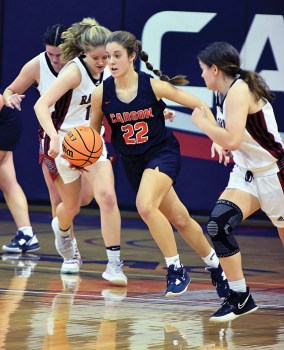 Carson's Allie Martin 22 gets a rebound and starts a fast brake. photo by Wayne Hinshaw"; for the Salisbury Post..

SALISBURY — Allie Martin scored a career-best 20 points to lead Carson to a 48-34 win against South Rowan on Wednesday afternoon.

Fifth-seeded Carson (2-7) had staggered into the Dale’s Sporting Goods Sam Moir Christmas Classic with three straight lopsided losses, but with the help of a huge fourth quarter, the Cougars righted the ship against their neighbor.

“We played really hard and got a great effort from the entire team — everyone, whether they were on the floor or on the bench,” Carson coach Brooke Stouder said. “South got into foul trouble and that certainly helped us. We boxed out better than we have been. We did a nice job of rebounding.”

Alex Allen, who helped put Carson’s girls program on the map during her playing days, is now the South coach. It was a tough day for the fourth-seeded Raiders, who struggled with post player Kynlee Dextraze in foul trouble.

“Not our best,” Allen said. “We missed so many layups and scoring opportunities.”

Carson, which lost all five starters from a 25-4 team, did some things it hasn’t been able to do often this season, The Cougars made free throws (12-for-18) and they made six 3-pointers.

“They made some deep ones,” Allen said. “It was surprising.”

Martin, a sophomore who entered the season with 34 career points, is Carson’s most experienced player.

She got the Cougars off to a good start. Carson led 18-16 at halftime and 26-25 going to the fourth quarter.

Then Carson put it all together in the fourth quarter, with Martin getting six of her points and Alona Locklear, a soccer player who is playing varsity basketball for the first time as a senior, making two 3-pointers.

Martin also made two 3-pointers. So did Laila Furr. Furr scored a career-high 10.

“It was good to get a win,” Stouder said.

Senior Madilyn Cherry scored 15 to lead the Raiders (2-7), who lost their sixth in a row. Her next bucket will give her a 500-point career.

Carson advanced to a semifinal game tonight at 6 p.m. against top-seeded and undefeated West Rowan.

South will play East Rowan in a consolation bracket game at 3 p.m.

The second-seeded Cavaliers, coached by former Livingstone player Darra Walker, blistered third-seeded East Rowan 31-5 in the first quarter of Wednesday’s semifinal. After that explosion, it was just a matter of finishing off a 77-33 romp.

Bailee Goodlett scored 29 points, a little above her average. She had 15 in the first quarter.

Goodlett, who has been held below 20 points only once this season, had seven assists and five steals.

Brittany Ellis scored a season-high 20 points. She made four 3-pointers in that first-quarter flurry.

Bloom Goodlett made two 3-pointers and added 15 points for the Cavaliers (8-2), who have won five in a row.

North won 51-40 when the teams played earlier this season. The Cavaliers didn’t have Ellis in that one, but the Goodlett twins combined for 41.

North will play for the championship at 6 p.m. on Friday. The opponent will be the West-Carson winner.

East (4-5) returns to action today and will take on South Rowan in a 3 p.m. consolation game.