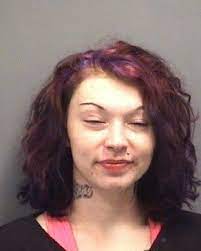 A Rowan County fugitive was returned to Salisbury on Dec. 22 following a cross-country flight from law enforcement.

Savannah Maria Queen, 26, was apprehended by personnel representing multiple agencies at a Connecticut hotel on Nov. 9. The North Carolina State Bureau of Investigation, the North Carolina Department of Public Safety and the U.S. Secret Service assisted in Queen’s capture.

The saga began in August when Rowan County detectives initiated an investigation into a drive-by shooting on Ellis Road Loop. When executing a search warrant at the residence, authorities reportedly discovered Queen living inside.

While being questioned, Queen reportedly gave the name Jennifer Chiles, who investigators later learned was an associate of Queen.

During the search, investigators recovered a “substantial amount” of narcotics inside the residence. Detectives subsequently realized that Queen had provided a false identity and was the subject of multiple active arrest warrants from surrounding counties.

The investigation also revealed that Queen had a history of posing as Chiles, giving that name to authorities in Davidson County.

New warrants were issued for Queen’s arrest. However, when investigators went to look for her, she had left home and was nowhere to be found.

After her presence at the Connecticut hotel was confirmed, she was taken into custody. Her extradition to North Carolina would take a little more than six weeks.

Queen is charged with trafficking in cocaine, maintaining a dwelling for a controlled substance, possession with intent to sell and deliver cocaine, possession of drug paraphernalia, identity theft and resisting a public officer.

She was placed in the Rowan County Detention Center under a $7,500 bond.