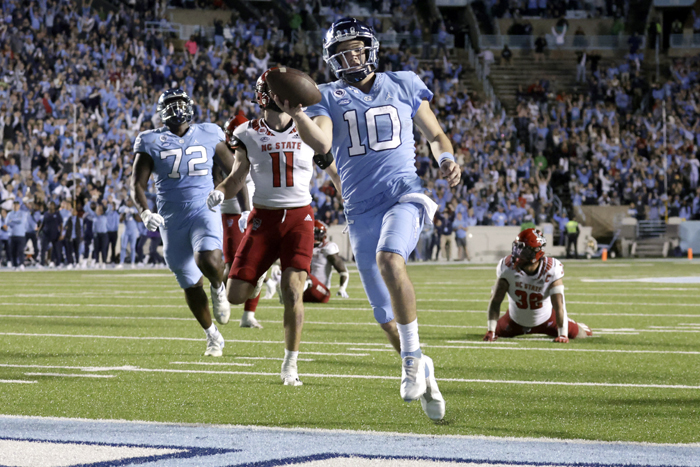 SAN DIEGO — Bo Nix and the No. 15 Oregon Ducks will face Drake Maye and the North Carolina Tar Heels in what’s expected to be a high-scoring Holiday Bowl. It will be the first football game at Petco Park, the downtown home of the MLB’s San Diego Padres.

Nix and Maye both put up big numbers during the regular season and are looking for a strong finish after their teams slumped at the end. Oregon lost two of its last three games, including to rival Oregon State.

The first Holiday Bowl since 2019  could rejuvenate the bowl’s history of wild high-scoring games. Quarterbacks Nix and Maye look to lead their teams back from their late-season doldrums.

Maye vs. Oregon’s defense. Maye will have to count on other receivers to step up after Josh Downs opted out of the Holiday Bowl to prepare for the NFL draft. Downs led the team with 94 catches for 1,029 yards and 11 touchdowns despite missing two games. He had 11 catches for 100 yards in the loss to Clemson.

Oregon: Nix threw for 3,388 yards and 27 touchdowns, with six interceptions, and ran for 540 yards and 14 more touchdowns. He recently announced he’ll return for his fifth season of eligibility in 2023.

North Carolina: Maye, the ACC Offensive Player of the Year, threw for 4,115 yards and 35 TDs, with seven interceptions. His breakout season has made him a top prospect for the 2024 NFL draft.

The 2020 Holiday Bowl was canceled due to the COVID-19 pandemic. And in 2021, the bowl didn’t happen because UCLA pulled out about five hours before kickoff against North Carolina State, citing a COVID-19 outbreak. … Capacity at Petco Park is 41,000. … One end zone will be along the right field line and the other will be up against the left field wall. … This is the first game of a contract between the Pac-12 and ACC that was originally set to begin in 2020 … The Padres spent roughly $2 million on modifications as part of their contract to host the Holiday Bowl through 2025. … The first 42 Holiday Bowls were played at Qualcomm Stadium, which was torn down to make room for a new stadium and campus expansion for San Diego State. … Tar Heels coach Mack Brown was inducted into the Holiday Bowl Hall of Fame in 2016 for leading Texas to five appearances between 2000 and 2011 with a 3-2 record. … North Carolina offensive coordinator and quarterbacks coach Phil Longo and offensive line coach Jack Bicknell Jr. left in early December for the same roles under new Wisconsin coach Luke Fickell. UNC hired Chip Lindsey from Central Florida as its new offensive coordinator and quarterbacks coach, and Randy Clements from North Texas to coach the offensive line.