The Donnettes try to ‘keep moving’ through their golden years 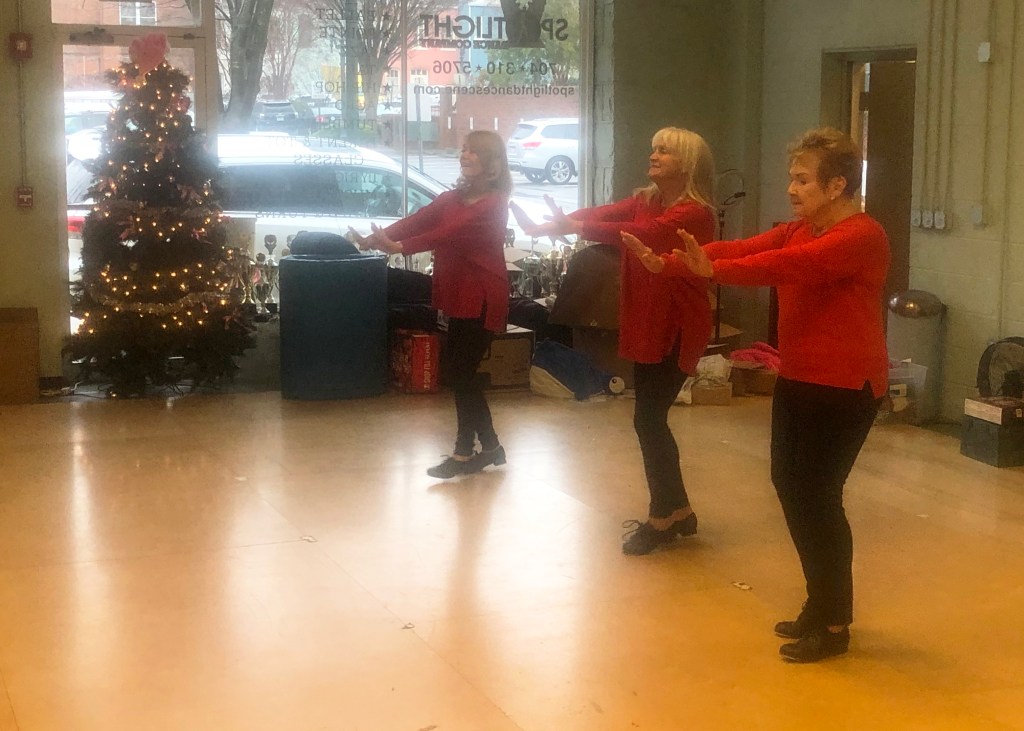 The Donnetts perform a routine at the Spotlight Dance Studio.

SALISBURY — When people reach a certain age, some decide to rest and take it easy. For others, that never crosses their minds.

Debbie Hoffman, Donna Weinhold-Hall, and Jane Smith-Steinberg have spent much of their retirement forming their own tap dancing group, The Donnettes. They have performed several times around Salisbury and won the first place at the Salisbury/Rowan Senior Games SilverArts back in March. They went on to win gold in performance dance at the state level in September.

“We have gone to nursing homes, VA hospitals, we give our talent, we never charged for anything. We just wanted to give back to the community,” Hoffman said.

All three have been dancing for most of their lives. Hoffman was a teacher and choreographed for Piedmont Players in the past and still appreciates all the benefits dancing at her age brings.

“I do it because I feel like it keeps me young and at this age, learning the choreography and routines helps with the brain,” Hoffman said.

Smith-Steinberg began when she was four years old and worked for years also as a teacher, and she actually taught Hoffman years ago in physical education.

“When I retired from teaching, I found out about Donna and I said, ‘I need to get back into this.’ because I loved it,” Smith-Steinberg said.

Weinhold-Hall started to dance in order to get over a physical ailment she had as a child and it turned into something she has devoted her entire life to.

“When I was five years old, I got polio and the doctors said, ‘The best thing for you to do is get her in some kind of exercise.’ It was winter so I couldn’t swim, so they put me in dancing. Honestly, that was the Lord — I fell in love with it. I just have not stopped since I was five years old,” Weinhold-Hall said.

Weinhold-Hall would go on to start her career teaching dance and opened Donna’s Dance Studio, which is now Spotlight Dance Company, that her daughter Marianna Riley Jarrett now operates. Smith-Steinberg began dancing with Weinhold-Hall in the early 2000s and Hoffman joined roughly a decade later.

Weinhold-Hall keeps them all sweating when getting ready for a competition, where practices go for an hour to hour and a half, four to five times a week. “I work them hard,” Weinhold-Hall admits with a laugh.

Weinhold-Hall also picks out the music The Donnettes dance to. “I figure them out. Whatever has good tempo, fun. We have a whole resumé, probably 45-50 dances now because we’ve danced for so long together.”

Before the pandemic, The Donnettes would perform at the VA hospital, which really made an impression on them among the many performances that they have done.

“The one that stands out those most for me is at the VA, when they wheel these young men and women in who have served our country, and we danced Christmas shows for them for years,” Weinhold-Hall said.

The Donnettes will try and take part in the next Salisbury/Rowan Senior Games SilverArts in March. Even as they are getting older, none of The Donnettes have any plans of staying still. One of the women they used to dance with, Hazel Trexler-Campbell, is 100 years old and is a source of inspiration for them.

“I think we’re in better shape now. If we weren’t dancing we would be in an easy chair somewhere,” Hoffman said. Eschewing those easy chairs, these woman intend to be dancing long into the future. 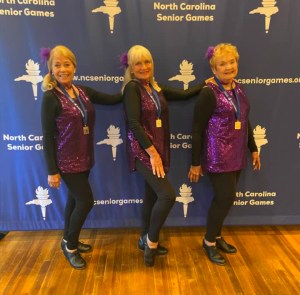 The Donnettes after winning gold at the North Carolina Senior Games.