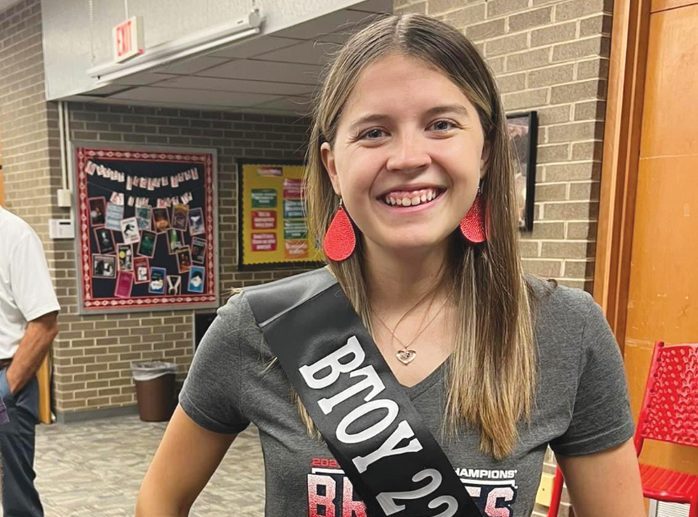 SALISBURY — Back in October, Amber White was the reigning local champion of teachers when she was selected as the Beginning Teacher of the Year for Rowan County.

White, a second-year middle school math teacher at China Grove Middle School, does not do what she does for accolades, but because she is determined to show her students that math is not a scary subject, and that failure is not a reason to stop, but a reason to carry on.

Now, that attitude and her positive approach, among other qualities, have earned her a spot as a finalist for the The North Carolina Center for the Advancement of Teaching (NCCAT) Beginning Teacher of the Year Award.

She is one of 27 finalists across North Carolina who will attend a week-long NCCAT professional development and leadership development symposium in Asheville from March 6-10. During that time she and others will attend professional development classes and take advantage of leadership opportunities. They will also be interviewed by the NCCAT judges panel and their portfolios will be reviewed before a winner is selected. The winner will receive a $5,000 cash prize, participation in the GoGlobal NC trip in 2024, and instructional supply funds for their school. GoGlobal was established by former Governor James B. Hunt Jr. in 1979. “Originally known as the Center for International Understanding, the mission was to demystify other nations and cultures through people-to-people diplomacy,” according to the organization’s website. It’s goal is to send Americans to other countries for a week to learn other cultures, including how education works in other countries, and then to invite those international hosts to come to America to see how our culture works.

“I am thrilled that Ms. White is a finalist for North Carolina Beginning Teacher of the Year. She is a passionate and engaging educator. I have visited her classroom and witnessed how she makes math come alive for her students,” said Dr. Withers. “Additionally, I am fortunate to have experienced her support and investment in students from the parental perspective as well. This honor is well deserved, and I’m excited to see her work recognized on the state level.”

White said she credits her success to the fact that she “plans for each one of my kids individually, rather than for the whole class. Each student learns differently and I plan for each one of them.”

In addition, she said she is aware that many students do not like math because they have had previous negative experience with the subject. She believes part of her job is overcoming the fear or the perception that math is “too hard.”

“My motto is ‘mistakes allow thinking to happen,'” she said. “It’s even on my classroom wall now. We fail forward.”

Asked what she believes she does that sets her apart as a teacher, White said, “I think it’s just reminding my peers to encourage children to build the grit and strength to keep trying, not to quit.”

Middle school is often seen as a difficult age to teach, but not for White.

“I wouldn’t trade my middle school kids for anything,” she enthused. The selection of the state winner will be announced on March 9 during the symposium.