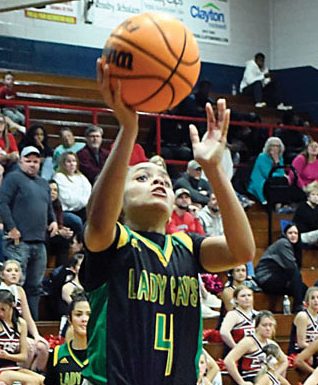 North Rowan’s Bailee Goodlett drives for a shot. She continued her hot streak Thursday with a 35-point effort. File photo by Wayne Hinshaw, for the Salisbury Post

SALISBURY — More people can tell you how Batman and the Amazing Spider-Man got started, so it’s probably a good time to remind the young folks of the origin of the Dale’s Sporting Goods Sam Moir Christmas Classic.

Back in the 1960s, when people played vinyl records, had only three or four TV channels and read leather books and massive newspapers that they actually held in their hands, the local high school basketball season came to a screeching halt every year when the schools adjourned for Christmas break. Teams continued to practice during that holiday down time, but practice gets old after a while.

Winston-Salem held an annual high school Christmas tournament — the Frank Spencer Classic — that was quite successful. That provided the inspiration, and a conversation between Salisbury High boys coach Bob Pharr and Catawba men’s coach Sam Moir put the wheels in motion to get a Rowan tournament started in the new Catawba gym that was dedicated in 1970.

After the dormant girls basketball program was revived at Salisbury High for the 1974-75 season, the next step was to add a girls bracket to the Christmas tournament.

The girls debuted on the Catawba floor in 1975, with coach Jesse Watson’s powerhouse East Rowan girls program blowing out West Rowan 63-33 for the first title.

The tournament steadily grew, recovered from the 1988 measles epidemic which shut down the tournament for a year, and became Rowan County’s most popular annual event. Catawba was designed to seat more than 3,000 and there were overflow crowds for the mightiest match-ups.

It was in 1996, on the 25th anniversary of the event he helped start, that the Christmas tournament was named in Moir’s honor.

In modern times, Sam Moir Christmas Classics are played on Sam Moir Court. The legendary coach died in 2018, but his name lives on through Catawba’s gym and this tournament.

It’s a tournament that has been embraced by every corner of Rowan County, as well as by neighbors such as Davie County.

COVID erased the tournament from schedules in 2020.

Shots fired in the lobby on semifinal night stopped the tournament in 2021. So no champions have been crowned since 2019.

The tournament tries to make a comeback at Catawba this week, although with increased security and a much different look.

The powerful Salisbury girls, defending 2A state champs, won’t be part of it this year. They begin tournament action tonight at Cary Academy in the prestigious John Wall Invitational.

The Salisbury boys also are missing. The Hornets and heavily recruited Juke Harris will be playing two games at Chambers High in Charlotte.

The new-look tournament will include jayvee games to fill in the earliest time slots each day of the three-day event.

Format changes mean first-day byes for the No. 1 seeds (West’s girls and Carson boys had the best pre-Christmas records). The No. 2 vs. No. 3 match-ups to conclude the first day of action will be semifinals with winners punching their tickets to be in the championship game.

So much has changed, but it’s still the Sam Moir Christmas Classic.

Daily admission is $10, with three-day passes sold for $25. Children 5 and under get in free. There are 21 scheduled games, including nine jayvee contests. There are seven games on Wednesday, Thursday and Friday, with the championship games set for Friday night at 6 p.m. and 8 p.m.

West’s unbeaten girls are favored to roll to a title, but the boys bracket is pretty wide open.

• Game 2, 12:15 p.m. — East vs. South jayvee girls. East’s girls are 6-0, while South’s girls won their first three before losing to West. Carson and North don’t have jayvee girls teams this season, so the jayvee girls match-ups are already set for all three days of the tournament.

• Game 4, 3 p.m. — South vs. Carson girls. This 4 vs. 5 matchup also could be a dogfight. This will be the first meeting of the South Piedmont Conference neighbors. South (2-6) has the more experienced team and gets points from Madilyn Cherry and Kynlee Dextraze, both of whom average just under 10 per game. Allie Martin leads the Cougars with 9.6 points per game.

• Game 5, 4:30 p.m. — East vs. South boys. East is 2-5 but is favored by a lot in this matchup. The Mustangs have faced a tough schedule and they are the darkhorse — no pun intended — to win the tournament. East has 6-foot-6 senior Tee Harris, who averages  25.6 points per game and should dominate. East also has Dylan Valley, who averages 16.7 points and made eight 3-pointers in East’s most game. That’s a lot of firepower for the Raiders to contend with. South has dropped seven straight since winning on opening night. Dalton Young and Bronson Hunt are the leading scorers for South.

• Game 6, 6 p.m. — North vs. East girls. This 2 vs. 3 matchup is a semifinal. The teams have played once, with North (7-2) taking a 51-40 win against the Mustangs (4-4). North is led by guard Bailee Goodlett, a junior who leads the county in scoring at 27.4 points per game. Goodlett scored 28 in the first meeting of the teams. North played without No. 2 scorer Brittany Ellis in that first meeting with the Mustangs, but she’s been raining 3-pointers in recent games and averages 11.5 points per game. Bloom Goodlett and Dasia Elder have had their moments as double-digit scorers, while Chloee Stoner and Krisstyle Stockton contribute steals and rebounds. Hannah Waddell (13.1) is the leading scorer for the Mustangs, who usually score in the 40s. Mary Church and Lindsey Cook have turned in quality games for East, and Kady Collins is coming off a breakout, 17-point effort in the 54-50 loss to Central Davidson.

• Game 7, 7:30 p.m. — North vs. West boys. This is a 2 vs. 3 semifinal, with the winner moving on to the championship game. While the Falcons are only 3-5, they are really good for a 3-5 squad and they have a good chance to win the tournament. They could just as easily be 6-2, but they lost three one-possession games early. West has two players averaging 20 per game, with Athan Gill scoring in a lot of ways and Will Givens Jr. doing most of his damage from the 3-point line. How much help they’ll get it is the critical factor. Point guard Kayvone Norman has provided a third scorer, at times, including a pivotal, 20-point night in a 64-62 win against Carson. West hammered North 77-46 in an earlier meeting, although this matchup looks much closer than that on paper. North (4-5) has an interesting collection of athletes and scorers, but is still trying to put it all together. George Maxwell (13.4) and Jayden Polk (12.0) are the leading scorers, while Amari McArthur has had two 18-point games. Both teams lack size. It will be up and down.