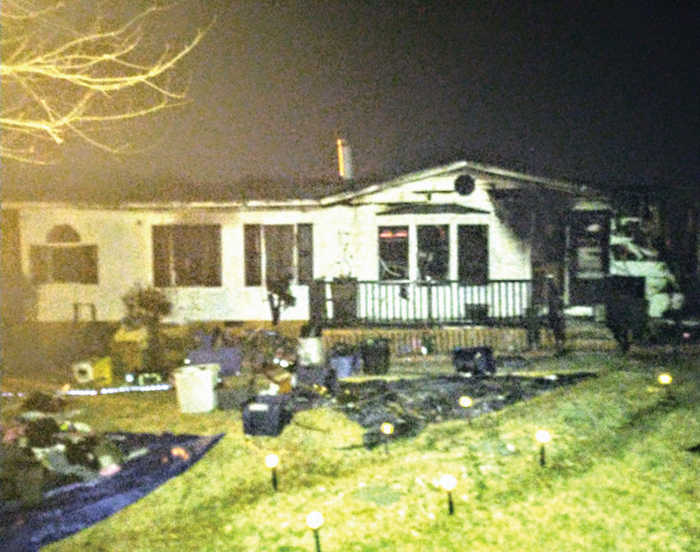 As a winter storm made its way across North Carolina and Rowan County over Christmas weekend, there were intermittent issues with both power and, in some cases, water outages.

Downed trees created pockets of power outages throughout the day on Friday, but fire and electrical crews from the county and individual towns and from Duke Energy were able to work relatively quickly to address individual instances.

At two separate points over the weekend, a swath of Faith was without water as both the heater froze and a valve needed replacing at Aqua Water Community Well. In addition, reports of frozen pipes affecting both hot water and complete water service were reported throughout the area Friday and Saturday night. Pipes did begin to thaw on Sunday and into Monday, but several locations had pipes burst before they could thaw. Grace Lutheran Church was one of those places that suffered a burst pipe.

In Rockwell, several thousand were without power for most of the day Saturday, but most, according to the power company, were back on by Saturday night. Small pockets of homes did go two days without power, however, and in Kannapolis, as of press time Monday there was still a small pocket of less than 500 homes without power.

In many cases, power outages were caused by trees falling on power lines, said a Duke spokesperson, and an extremely high call volume combined with the wide area of outages meant it took longer in most cases to resolve the issue.

“In cases where trees fall on power lines, the first thing is always safety,” said a man who answered the phone at Duke, but asked not to be identified. “Making sure the public and any of our crew or firefighters on the scene are safe is our number one priority,” he said. “We have to turn the power off, then the tree or limb has to be removed, but it may take time to get a crew who can do that to the scene. Once that is completely cleared, we have crews who can restore power, but it’s not usually a simple flip of a switch or replacing one line. It can be much more involved depending on how much damage has been done. But I will say, we work as fast as we can, safely.”

In addition to high winds causing damage to lines, the wind chill drove temperatures down well below freezing, dipping into single digits for three consecutive nights in some areas. Pipes were subject to freezing even when residents left water dripping in faucets.

Rowan Helping Ministries has had a warming station open any time it has dropped below 20 degrees, and fire stations have offered warming stations to first responders who have been out in the cold for extended periods.

On Friday, North Carolina North Carolina had the most customers with blackouts (176,569), and Governor Roy Cooper issued a state of emergency due to the expected extreme cold.

Over the holiday weekend between Thursday and Sunday, fire departments responded to three house fires, on Bull Dog Lane, Gold Hill; Karriker Road, Salisbury; and Dove Meadow Drive, Salisbury. The American Red Cross has assisted with 10 displaced people from those fires, though fortunately no one was injured in any of them. Causes of the fires have not been determined as yet.

The 1985 record low temperature in the state at Mt. Mitchell of -34 degrees has not been broken, but wind chills this weekend came close.

Weather forecasters are now predicting this area could see a high of 60 degrees on New Year’s Day.