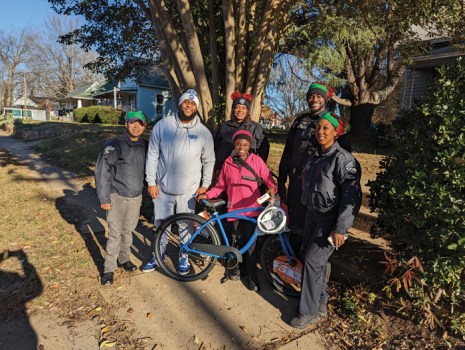 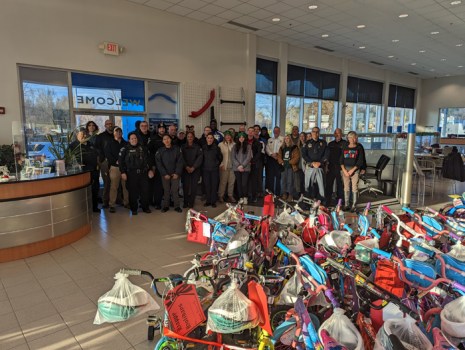 Salisbury police officers, members of the Gerry Wood Auto Group staff and members of Phi Beta Sigma gathered at the dealiership before fanning out to deliver 118 brand new bikes to children throughout the city. 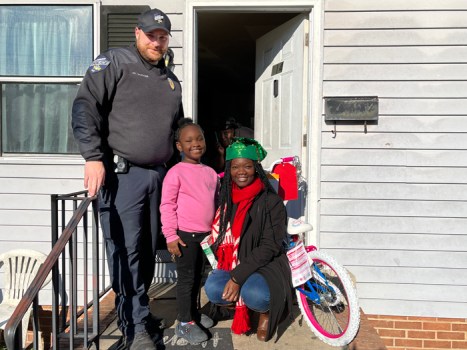 Salisbury officer Jay Basinger and city communications specialist Kaisha Brown had the enviable task of delivering a brank new bike to this young lady for Christmas. 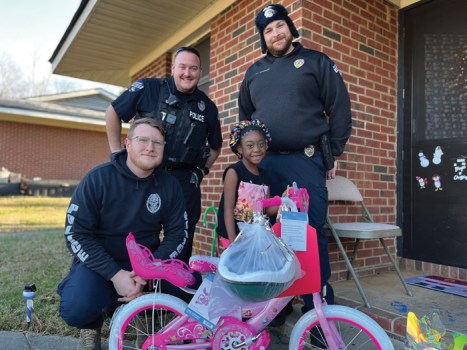 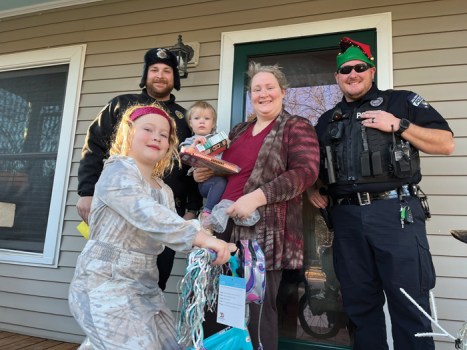 Officers Jay Basinger (left) and Lyle Branch (right) were all smiles delivering one of the new bikes this week for Christmas. 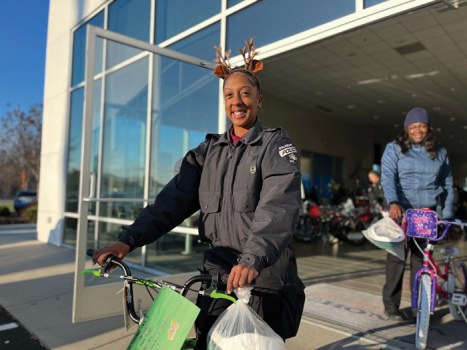 Salisbury police officer Shakera Anderson gets ready to help distribute more than 100 bikes to local children for Christmas, courtesy of Gerry and Brenda Wood of the Gerry Wood Auto Group.

SALISBURY — Twenty-one years ago, Gerry and Brenda Wood were inspired by their son, a Canadian police officer, to do something to benefit both their community and their police department.

The goal was to help children have a positive interaction with police, to “help build trust in the police,” said Salisbury Police Chief Jerry Stokes.

They decided to give new bicycles to the police department which would then distribute the bikes to children in need throughout the city.

This year, as the Woods have decided to sell their business, Gerry Wood Auto Group, marks the last of the bike giveaways.

This week, staff from Gerry Wood Auto, Salisbury police officers and volunteers from Phi Beta Sigma joined to distribute the more than 100 bikes across the community.

The police department received applications to determine where the bikes would go, and in addition, Stokes noted that all siblings were included in the gift giving.

“You might have a younger sibling who’s too small to ride a bike, but officers have books and teddy bears and other gifts so all the siblings are included.”

Brenda said because this year is the last, their son “flew in from Toronto to be here. We’re sorry it’s ending, but there are a lot of great memories.”

“Community engagement and trust is the cornerstone of community policing,” said Stokes. “That piece can’t be missing. The Woods have fully funded this program for years, and they have been valuable partners in our efforts at community connections.”

Brenda related one of her favorite stories from the program in years past.

“An officer came back from making a delivery, and he was visibly moved,” she said. “I asked if he was OK. He was a white officer delivering a bike to a nine-year-old Black child, and he said at first he could see fear in the child, until he saw the bike. And then the child told the officer, ‘when I grow up I want to be a cop, so I can make children happy.'”