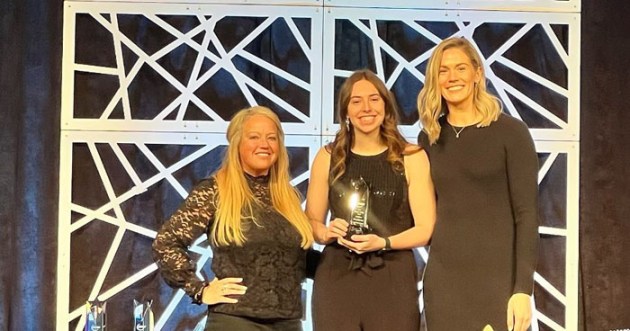 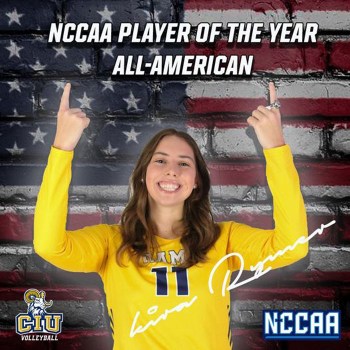 South Rowan graduate and CIU volleyball player Kira Rymer is a sure thing to be inducted into that new Hall of Fame someday. The junior is accomplishing things no CIU athlete has ever done. Not just in volleyball, but in any sport.

CIU competes in athletics as a dual affiliate of both the National Christian College Athletic Association and the National Association of Intercollegiate Athletics. NAIA schools give athletic scholarships and they play volleyball at a level close to Division II.

Rymer is the National Christian College Athletic Association National Player of the Year, which means she was voted to be the best from the 90 or so NCCAA schools.

Rymer is the first athlete in CIU history to win national player of the year honors — in any sport.

“Choosing Columbia International is one of the best decisions I ever made,” Rymer said. “When you sign to play college athletics, you don’t think about things like being an All-American or being the Player of the Year. You’re just hoping to be good enough to play. But I had great preparation in high school and got a lot of hours of training from my uncle (Salem College coach Barry Rymer), and it’s really helped me,”

Rymer’s volleyball versatility was put to good used by strong South Rowan teams coached by Jenna Horne and she achieved the rarity of topping 1,000 kills, 1,000 digs and 1,000 assists in high school.

As a Columbia International Ram, the 5-foot-11 Rymer has been able to concentrate on doing a few things very well. As a right side hitter, she has been devastating. She broke the program record for kills this season with 614.

“Just being a front row player is different,” Rymer said. “I’m still basically the same player I was in high school, but I’ve been able to focus on making improvements as a hitter and as a blocker.”

While it may sound crazy, Rymer has received a postseason accolade that may be even bigger than NCCAA National Player of the Year.

There are 229 NAIA schools competing in women’s volleyball, and Rymer is one of 15 first teamers.

Almost all of the NAIA national volleyball powers are established programs in the Midwest. Rymer is the only first team All-America chosen who plays east of Indiana.

“First team NAIA means just as much as NCCAA Player of the Year because NAIA is so competitive and there are so many more schools,” Rymer said. “I feel very honored.”

Added CIU coach Amber Haver, “It’s so incredible when hard work is recognized at the national level. First team All-America was a goal I had for Kira and I’m fairly certain she didn’t believe me that it was within her reach. She’s a very humble, but hard-working athlete. I’m glad to see her get honored at this level.”

Rymer was  Appalachian Athletic Conference Player of the Year and she was a region player of the year for NCCAA and NAIA.

She led CIU to a national runner-up finish in the NCCAA playoffs, but CIU lost at home in the first round of the NAIA playoffs.

“Five sets, a heartbreaker, especially when we got to play it at home,” Rymer said.

Rymer was valedictorian at South, following in the footsteps of her father, Rodney Rymer, who also was No. 1 in the classroom during his days at South.

She has continued to excel with the books at CIU and was recently named a first team Academic All-America. She carries a 3.89 GPA while majoring in business administration and sports management.

Off the court, it’s been a whirlwind of success and new experiences for her.

For instance, her roommate is an athlete from Poland.

She serves on the school’s Student Executive Board.

Socially, CIU has proven  to be the right fit. She’s met the person she plans to marry and the wedding is being scheduled for July.

So life will be much different for her next fall, but she still plans to be an All-America for the fourth straight time. That would be a hard record to ever beat at CIU.

“I’ve also got that COVID (redshirt) season, so I could go to grad school and try for five in a row,” the future Hall of Famer said with a laugh.

Once Rymer got home for the holidays, she didn’t stay in China Grove long. She embarked on a family road trip to Omaha, Nebraska, seeing some sights along the way such as Mammoth Cave in Kentucky.

In Omaha, she was the American Volleyball Coaches Association’s guest for a Division I national semifinal — and she also got to pick up a nice Christmas gift.

At the AVCA All-America banquet, Olympic Gold Medalist Annie Drews, a volleyball pro and one of the world’s best players, presented Rymer with her NCCAA National Player of the Year award.

“I’ve had some things happen for me that I never could have dreamed of three years ago,” Rymer said.