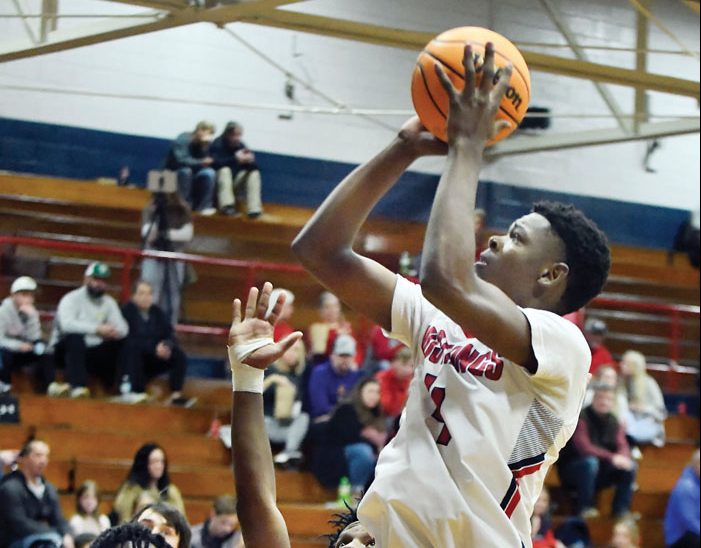 East Rowan’s Tee Harris, a 6-6 senior, is averaging 25.5 points per game heading into the Christmas tournament. File photo by Wayne Hinshaw; for the Salisbury Post

Shots fired in the lobby during halftime of a semifinal game abruptly ended the event in 2021.

While no champions have been crowned since 2019, the basketball tournament, run by the ADs of Rowan County and staged in Catawba College’s historic Goodman Gym, will be making a comeback attempt — with a clear bag policy — next week.

There was plenty of talk about not playing the tournament at all and more discussion about changing the venue, but as Carson boys coach and former Catawba player Brian Perry said, “How can you play the Sam Moir Christmas Classic anywhere but Catawba?”

Enough people agreed with Perry that the tournament will be returning to Goodman Gym, where basketball games are played on Sam Moir Court in honor of the late Catawba men’s coach.

This will be the 50th Christmas tournament, another reason that a lot of movers and shakers wanted to see it happen.

While a holiday basketball tradition that has been a huge part of the sports scene in Rowan County continues, the 2022 tournament, in many ways, won’t resemble the previous editions.

Salisbury High chose not to play in the event, so it will be the first Christmas tournament without the hometown Hornets.

That means opportunities for big-stage exposure not just for Harris, who doesn’t really need any additional hype, but for his teammates. Salisbury’s boys will be playing multiple games in Charlotte against strong competition following the Christmas break. Those games should benefit their RPI and eventual playoff seeding.

Salisbury’s girls are an equal attraction with the school’s boys, because of a 34-game winning streak and lofty status as defending 2A state champs. Salisbury has an All-State senior guard in Kyla Bryant, and the Hornets would be welcomed anywhere. They accepted an invitation to play in the prestigious John Wall Invitational in Raleigh. That tourney should provide additional exposure for Bryant, who hasn’t committed to a college yet, as well as several of her uncommitted and very talented teammates.

Salisbury’s boys are 5-3 and wouldn’t be locks to win the event, but they would be the favorite and the No. 1 seed.

Salisbury’s girls would be co-favorites with a powerhouse West Rowan squad. A Salisbury-West girls matchup had the potential to provide one of the great games in tournament history and would have sold out the gym. Both teams are serious contenders for state championships.

Davie County, a 4A school that brought throngs of orange-clad fans to Moir semifinals and championship games over the years, is also not in this year’s field. In their new home on the northern side of Davie, the War Eagles aren’t as close to Salisbury as they once were, but they had numerous Moir champions crowned in Goodman Gym and were an important staple of the event for many decades.

A.L. Brown, which has been part of recent Moir tournaments, is also out of the mix. The Wonders played in a tournament last week in the Pembroke area, a homecoming for A.L. Brown boys coach Jonathan Efird, who played football at UNC Pembroke and got his coaching start in Robeson County.

The tournament will still have 21 games over the three-day period because jayvee teams will be playing in the three early games each day. Nine of the 21 games on the docket are jayvee games.

All five schools have jayvee boys teams, so those teams will vie for a championship. North Rowan has, by far, the best record among the jayvee boys at 7-2, but North’s victories against West and East were close enough to indicate that it should be competitive.

With just five schools, the varsity format is different than normal.

As has been the case forever, seeds are based on pre-Christmas records, not rankings or message boards or opinions or even head-to-head results. Carson’s boys and West’s girls are the No. 1 seeds, so they will have byes on Wednesday.

West’s undefeated girls haven’t experienced anything resembling a close game yet and appear to have the smoothest route in history to get to the championship game. In Thursday’s semifinals, West will play a Carson team it beat 73-13 or a South team it beat 74-12.

There will be important games played to conclude the action on the opening day. The 2 vs. 3 first-round match-ups for boys and girls are semifinals, with the winner moving on to Friday’s championship. That’s a North-West boys matchup and a North-East girls matchup, and potentially some of the tournament’s better games.

Some teams will be going home after two days.

West’s girls are good enough that it will be a surprise if they don’t win the tournament. In the final, they would be playing an East team that North has beaten or a North team that West beat 67-27, although North didn’t have a healthy Brittany Ellis for that one and North is at least 15 points better with Ellis than without her.

The boys side of the bracket looks a lot more wide open. Even No. 4 seed East has a shot.

The best game of the season so far probably was the Carson at West Rowan boys South Piedmont Conference game that the Falcons won 64-62.

West’s boys are only the No. 3 seed for the tournament, but might be the favorite. The Falcons started out 0-5, with three down-to-the-wire losses, but have now won three in a row — all against Rowan teams — under new coach Dadrian Cuthbertson. Cuthbertson definitely will have the best beard at the tournament.

There will be no shortage of talented individuals.

North junior guard Bailee Goodlett is a quick-handed and quick-footed blur who gets more steals than the average kleptomaniac. She’s the county’s leading girls scorer at 27.4 points per game.

Smooth junior Lauren Arnold leads the scoring for a well-balanced West team with 13.9 points per game, while teammate Tiara Thompson (12.8) has been the county’s top freshman.

On the boys side, East’s 6-6 senior Tee Harris is pouring in 25.5 points per game, blocking shots and piling up rebounds.

West’s boys have a high-scoring duo with senior Athan Gill muscling for 20.5 points per game and junior Will Givens Jr. knocking down flurries of 3-pointers and averaging an even 20.

Carson sophomore Colin Ball has scored 25-25-24 in his last three games and is just one of the Cougars capable of lighting it up from 3-point range.

Tickets can be purchased at the gate or through a school’s Ticket Spicket digital option.

*Game times are approximate after the first game of each day.