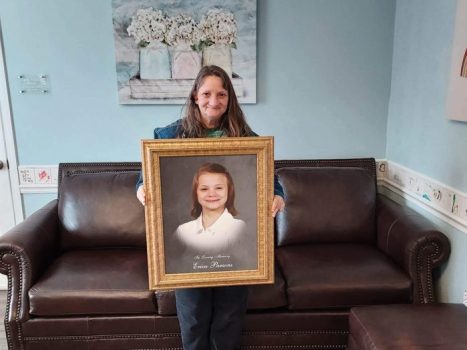 Carolyn Parsons holds the portrait of her 13-year-old daughter, Erica, who died at the hands of her adoptive parents after suspected years of abuse. The portrait was donated to Prevent Child A,buse Rowan at the Terrie Hess House on Tuesday. Elisabeth Strillacci/Salisbury Post 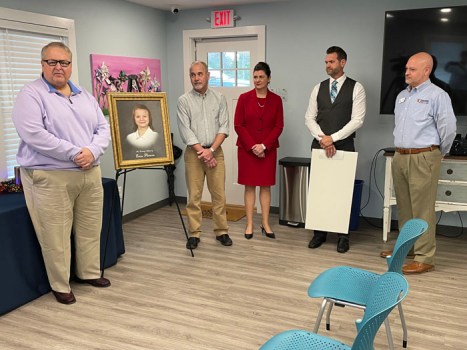 SALISBURY — In 2013, when 13-year-old Erica Parsons was finally reported missing, it was already far too late for the young teen.

Parsons by that time had actually been missing since 2011, and when her body was finally found in a shallow grave in South Carolina, she had been deceased for about 18 months. She was murdered by her adoptive parents, Sandy and Casey Parsons, both of whom are in prison for the crime, having been convicted at last in 2019. The case captured the hearts of people not only throughout Rowan County but across the state and even the country.

A portrait of Parsons was displayed at her funeral, and was presented to Sheriff Kevin Auten on his retirement at the end of November. The portrait has been on display in the Rowan County Sheriff’s Office since. Auten was sheriff during the investigation into both the missing girl and the subsequent murder investigation. Major Chad Moose, who retired the same day as Auten, was lead investigator on the case. When Parsons’ body was found, Moose kept the young girl’s body in his office until the coroner could claim it, refusing to close the body bag, saying she had been in the dark long enough.

He carried the portrait out of the funeral and on Tuesday, was present when he and Auten and District Attorney Brandy Cook presented the portrait to Prevent Child Abuse Rowan at the Terrie Hess House.

“I thought it was time to let it be displayed here permanently in the Erica Parsons room,” said Auten.

“I hope people see how bad it can be, and some parent some time will put the brakes on themselves,” added Moose, who said anyone abusing a child should be aware the county and department will put everything they have behind stopping child abuse.

“I’m truly glad that Erica’s life and story have brought child abuse back into the attention of the public,” said Parsons’ mother, Carolyn Parsons. “I hope Erica’s story makes people pay more attention to others around them and report on anything that concerns them, or worse, instead of waiting for someone else to do it. And I hope it keep her memory and her life alive in people’s hearts and minds. That’s so important to me.”

Terrie Hess House Director Shawn Edman expressed his gratitude for the portrait, noting it is a good reminder of the importance of what they do, and the ongoing need for the Child Advocacy Center.

Matt Marsh, owner of The Forum, also donated $10,000 to Prevent Child Abuse Rowan on Tuesday in honor of Sheriff Auten and all who worked on the Parsons case.