Better to give than receive: Shop with a Cop exhibits goodwill of youngsters 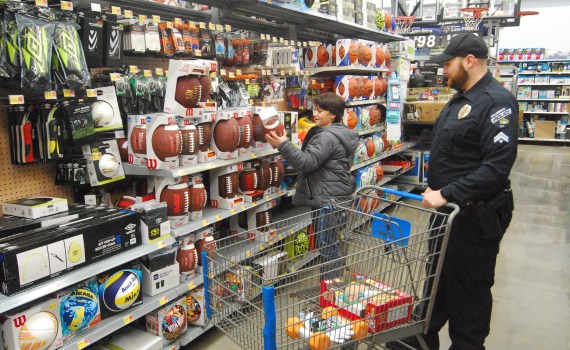 Dakota Smith considers a football as one item for his Shop with a Cop Christmas spree. 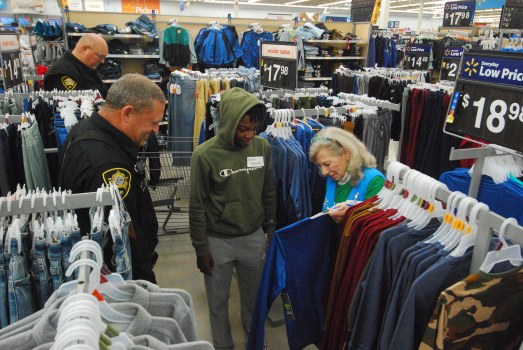 Rowan County Dep. Eric Eller, from left, Anton Pontoon and Janice Bumgarner check out some clothes at Walmart during Shop with a Cop.

SALISBURY — Every year, local law enforcement holds a Christmas shopping spree for selected middle schoolers from around Rowan County, and every year, they see the same thing — the kids using their money for others.

“I really wanted to get something for my little brother,” said Dakota Smith, one of the Rowan County students selected for Shop with a Cop, as he filled his buggy with toys for his whole family.

Smith picked out a special “Friends” bag for his Grandma.

“She loves that show,” Smith said.

He also got perfume for his mom and headphones for his sister.

On Saturday, Smith was one of about 30 area kids chosen for the $300-shopping spree at Walmart with local law enforcement officers. Rowan County Sheriff’s Deputy William Walker helped get the program, now in its eighth year, off the ground when he was a school resource officer.

“In the schools, I saw a lot of kids in need, especially around the holidays,” Walker said.

Today, the program is twice the size that it was back then, as more organizations and private donors have gotten involved.

“All of our funding comes from businesses and donations,” Walker said. “We write some grants for some funding too. Walmart has been really good to work with us. They have a foundation where we apply for funding every year.”

The COVID pandemic interrupted the usual routine of Shop with a Cop, but Walker indicated that they were still able to do it virtually.

“We set up an account through Walmart,” Walker said. “They went online and created a list. Then, we did a drive-thru, and they came and picked it up.”

Virtual or not, 2020 gave Walker a Christmas memory that he won’t soon forget.

“We had one little girl that year that wanted a bicycle, and she got one,” Walker said. “You would have thought we gave her a million dollars. That was pretty special.”

Students selected for the program are done so on a case-by-case basis by the school resources officers around the county.

“They know best about what a student might be going through,” Walker said.

Although they started with a wider age range, Walker explained that they had to narrow down the gap for the drive’s sake.

“We do ages 11 to about 14,” Walker said. “Primarily middle-school-aged kids. The first year we did a little bit younger, but it is kind of hard to shop for younger kids because they don’t really know what they want. We found an age group that knew what they wanted and was a lot easier to shop with.”

Once the big day came, the children met the officers at the West End Plaza in Salisbury before piling into cop cars and heading to Walmart. The officers mingled with the students and helped them pick out gifts.

“If an officer sees a kid that they think needs a pair of shoes or a coat, or something like that, we try to steer them in that direction,” Walker said. “We encourage them to not only buy for themselves but to buy for others if they have younger siblings.”

According to Walker, many of the kids take that message to heart.

“It has been a blessing because we see a lot of kids who spend money on other people,” Walker said. “They will spend money on themselves, but the majority like to buy for others.”

Walker is not the only person to take notice. Karen South Jones is the executive director at Rowan Youth Services Bureau and assists with Shop with a Cop.

“One of the most heartwarming things for me is every year, we have kids who may get some little something for themselves, but they will spend the bulk of the money that they have on other people, on their family members, whether it’s grandma or aunt or sisters or friends,” Jones said. “In a time where you have some stereotypes about kids being selfish and self-centered, that is not what we usually see.”

Jones was quick to credit Walker with the event’s success and believes those contributions reflect on the entire department.

“Walker has a heart for kids,” Jones said. “He truly believes in giving back to kids and this community. We are lucky to have officers like him. All these other guys and ladies who volunteered today are the same way. We are blessed in Rowan County to have people of their caliber working with us.”