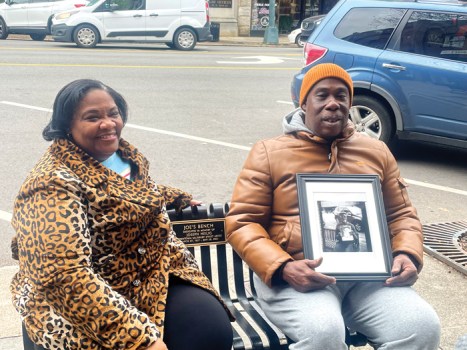 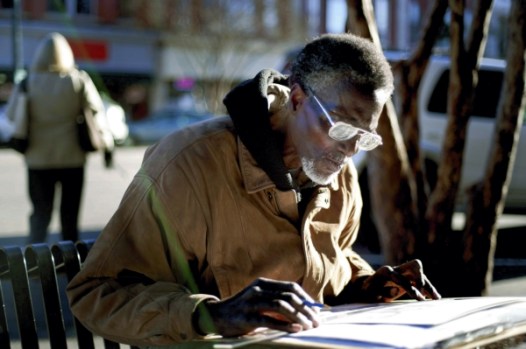 SALISBURY — A black cloth was drawn away from one of the public benches Tuesday morning on Main Street to reveal a plaque designating “Joe’s Bench,” in memory of artist Joseph Heilig, who used it as his art studio and his pulpit for any passersby.

When Heilig died unexpectedly May 28, momentum began to find a way to remember the artist, and the bench that everyone knew as “Joe’s” was the chosen spot in front of Fuller’s Market on South Main Street. Mayor Pro Tem Tamara Sheffield, who used to work in an office next door to that bench, got on board.

“I especially appreciate our downtown merchants and our community appearance committee for recognizing his contributions to our city,” Sheffield said. “He was one of our characters, one of our staples. I got to see Joe on a daily basis, and he was so kind to me. We are so fortunate he shared his talents with us. I’m sure his art is in several households around. He has been missed — he was never invisible to us, a lot of people cared for him.”

South Main Book Company’s doors open just past Joe’s bench, and owner Alissa Redmond said Heilig was one of the first people she met when she bought the book store. He never let her down.

“He sold me on living here,” she said. “If my carts were rolling down the street, he would come and tell me. When I got my dog (Hazelnut), Joe was the first person I took him to meet, and I asked if he could walk my dog sometimes. He always had my back.”

“I want to thank everybody for supporting my brother,” said Bernard Heilig, who said he and Joe were born in New York, but Joe had been in North Carolina about 20 years. He came to visit Joe in May to see if he wanted to relocate himself.

“Before I came, I called him on the phone, and discovered he was in the hospital. I visited him May 24 and had no idea he was going to pass away four days later. I’ve been in some other kind of space for these months. He was extremely talented, and was from childhood,” he said. “He taught me how to color inside the lines, in a coloring book. You know how kids will scribble. My mission for him is for the world to know his talent.”

Bernard said said he has many pieces of his brother’s work in storage and is not yet sure what he will do with them.

“Like so many others, I always loved seeing Joe create and welcome people,” said Rev. Mark Conforti of First United Methodist Church, before offering up a word of prayer. “With hearts full of thanksgiving, we remember Joe, an artist, a member of the Salisbury community and one of your children, God. We hope all those who not only pass by this bench but find rest here find it a symbol of welcome and hospitality and every day, as we pass by, we remember the creativity, life and energy Joe brought to Salisbury.”