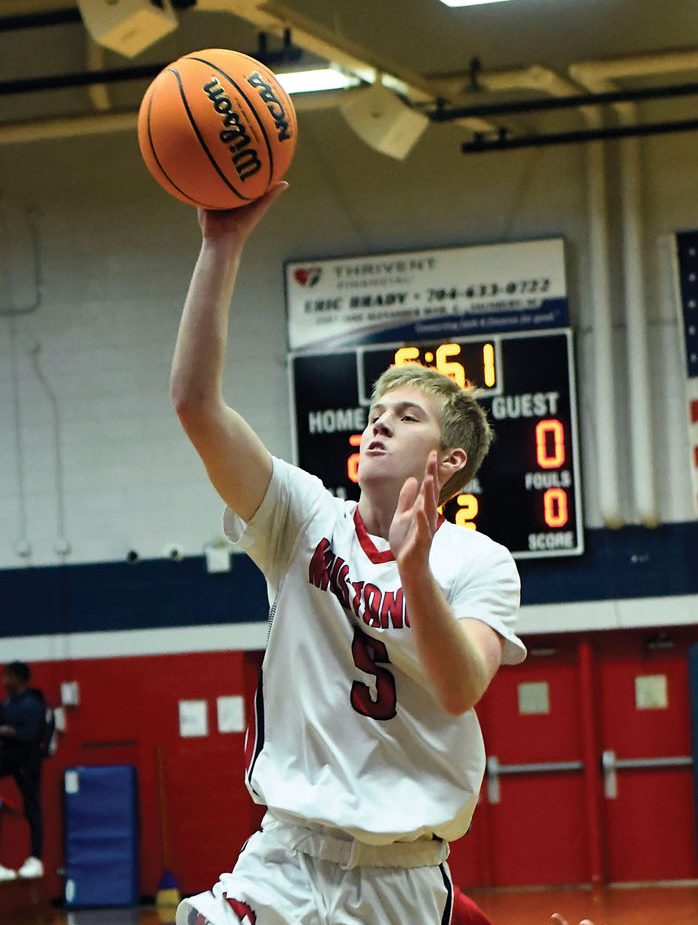 Three-pointers were falling for East's Dylan Valley in Wednesday's victory. File photo by Wayne Hinshaw; for the Salisbury Post

GRANITE QUARRY — East Rowan boys coach Andrew Porter has insisted every week of this season that he had a good basketball team.

He kept insisting, even as the losses piled up. When East fell to 1-5 last Friday — and 0-3 in the South Piedmont Conference — the insisting didn’t stop.

When you have Tee Harris, who averages almost 26 points per game, on your side you can’t be all bad, and East has been scoring enough points to win a lot of games.

But the problem was the Mustangs hadn’t been stopping anyone. In those three SPC losses, East allowed 91, 75 and 83. That’s too many, and while those were all good teams, none of them had Central Cabarrus on their jerseys.

East finally got its second win on Wednesday, ending a four-game losing streak. It was non-conference, so whether or not it’s a breakthrough remains to be seen, but it was an encouraging 79-66 home triumph against a Central Davidson squad that has been playing good ball.

The best part of it was outscoring the Spartans (7-3) by 24-11 in the fourth quarter to take charge of a tight game and win going away. East got those stops it’s been looking for and Tee Harris and Jonathan Wembolua ended a lot of Central Davidson possessions by securing the defensive rebound. Harris had 14 rebounds. Wembolua had eight.

“Took control of the game,” Porter said. “Big-time win for us. I really believe our defense is getting better every week. There were just so many positives with this one. Sometimes Tee and Dylan Valley are doing almost all of the scoring, but we got big shots from a lot of people. Jaden Sprinkle, Tijon Everhart, Jordan Brooks — they all hit key shots that changed momentum. We grew some as a team.”

It took East a while to get going. Fortunately, Valley was hot. He normally scores 14 or 15, but he doubled that. He made eight 3-pointers and scored a career-high 28.

“Dylan kept us in the game, even with that slow start,” Porter said.

East led 40-37 at halftime, but Central fought back to a 55-all tie after three.

Fourth quarter. That’s where East has wilted in some games, but not this time.

East moved the ball around before Valley drove, but he couldn’t get a tough shot to fall. But Harris got there, flying in to stick in the rebound.

That second-chance bucket put East up by six, and when Sprinkle confidently nailed a 3-pointer, the Mustangs were ahead by nine and on their way.

A transition bucket by Wembolua pushed the lead to 11, and the crowd started to celebrate.

Valley and Sprinkle made free throws to help finish off the Spartans.

Harris did what he’s been doing all season — 26 points to go with those 14 rebounds.

“Tee was especially strong in the second half,” Porter said. “With his size and his ability to score at all three levels, he is pretty much unstoppable.”

The 6-foot-6 Harris will give East an edge inside over anyone the Mustangs will face in the upcoming Dale’s Sporting Goods Sam Moir Christmas Classic.

That’s what he’s been saying all along.

Everyone will find out if the Mustangs have turned the corner in the tournament.  East will be seeded fourth  and will play No. 5 South Rowan next Wednesday.

Central Davidson made clutch free throws to hold off East Rowan 54-50 in a non-conference game on Wednesday.

East matched its best offensive production of the season, but the points allowed were a season high.

It was the last pre-Christmas action for the Mustangs (4-4), who will be seeded third in the Dale’s Sporting Goods Sam Moir Christmas Classic.

Kady Collins made big 3-pointers in the fourth quarter for the Mustangs on her way to a career-best 17 points.

“Kady made big shots and we’ve got to look for more shots from her,” East coach Bri Evans said. “We just weren’t able to finish it.”