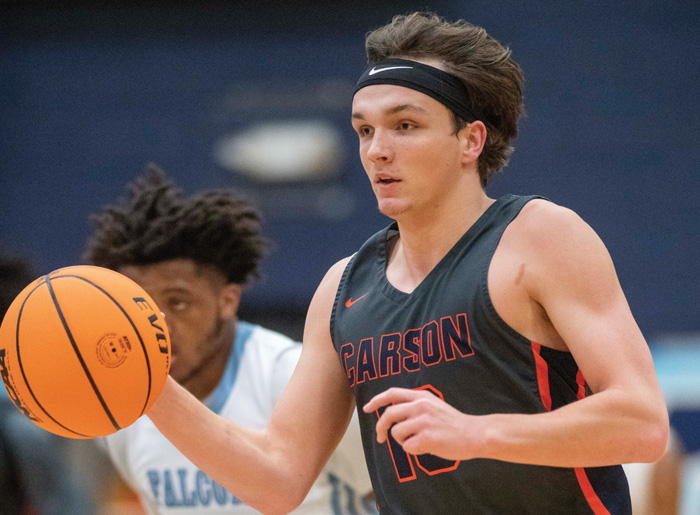 When Carson and North Rowan squared off on Tuesday night, neither boys team was above .500, but they were battling for the No. 1 seed for the upcoming Dale’s Sporting Goods Sam Moir Christmas Classic.

Colin Ball stayed on a roll for the Cougars with 24 points. The sophomore has 74 points in his last three outings.

Mikey Beasley made more 2s than usual and helped out with 18 points.

Ball made two 3-pointers early and Jay McGruder had all seven of his points in the first quarter, as Carson started fast and stayed on top.

Jayden Polk scored 21 for the Cavaliers, while Jaemias Morrow scored 15.

CHINA GROVE — North Rowan’s girls made it four wins in a row by overwhelming Carson 74-22 on Tuesday.

North scored 28 points in the first quarter, 17 by Bailee Goodlett, and took a 46-11 halftime lead.

The Cavaliers outscored Carson 22-1 in the third quarter.

Goodlett finished with 32 points for North (7-2), the fourth time this season she’s gotten 30-plus. She scored those 32 in three quarters.

She had 10 steals and six assists.

North made nine 3-pointers and will be seeded No. 2 behind undefeated West Rowan for the Christmas tournament.

Rebekah McCubbins and Allie Martin scored seven each for the Cougars.

“Close all the way and we played every hard, but we missed too many layups and free throws,” East coach Bri Evans said. “We are playing some good defense. We’ve played a lot of 1-3-1, but we played mostly man tonight.”

East went in front 19-17 on a 3-pointer by Waddell early in the third quarter.

A free throw by Church gave the Mustangs a 25-24 lead going to the fourth quarter.

Lettie Michael made key buckets for North Davidson (6-4) at crunch time, including the 3-pointer that broke a 30-all tie.

After the Mustangs got within 33-32, Michael scored again, and then blocked a shot.

East will be the No. 3 seed for the Christmas tournament, behind West Rowan and North Rowan. Salisbury isn’t in the tournament this year.

The East Rowan boys did not play on Tuesday, as the North Davidson team was fighting a flu bug.

The East boys will play tonight against Central Davidson.