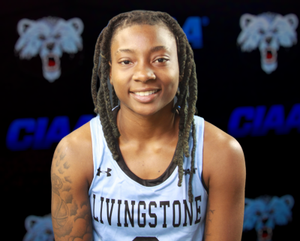 SALISBURY — Livingstone’s women’s basketball team left it all on the floor, but Virginia Union left New Trent Gym with the victory on Monday night.

Livingstone (3-8, 0-3) had a great chance to knock off one of the CIAA’s upper-tier teams, but it was not to be. The Blue Bears had an eight-point lead in the fourth quarter, but they couldn’t hold it.

Alexis Lake made a jumper with 22 seconds left in regulation to give the Blue Bears a 65-all tie.

After a Virginia Union turnover, Livingstone had the last shot, but it wouldn’t fall in the paint for guard Andresia Alexander, who led the Blue Bears with 17 points.

Alexander was 1-for-9 on 3-pointers, but she found other ways to score and made five 2s.

Virginia Union took charge early in the overtime session with accuracy at the foul line and held on.

Livingstone shot only 34.2 percent from the field but had the advantage in the turnover battle and fought for 19 offensive rebounds to get plenty of opportunities for second-chance points.

Thalia Carter scored an efficient 12 for LC, and 10 Blue Bears contributed in the scoring column.

Livingstone returns to action on Thursday, Jan. 5, with a CIAA game at Elizabeth City State.