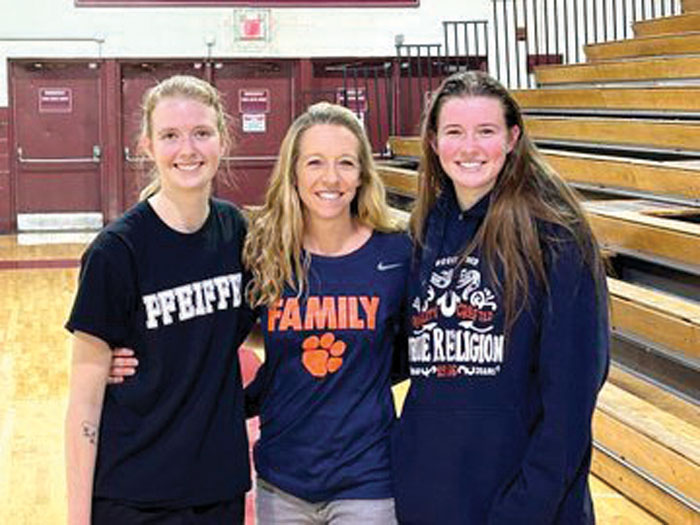 Pfeiffer University’s women’s team was playing at Guilford College in Greensboro, providing an opportunity for Stouder to see two of the key members of Carson’s undefeated 2020-21 state championship team in action on the same day.

Carleigh Perry, MVP of Carson’s state championship victory against Asheboro, plays for Guilford, while Hannah Isley suits up for Pfeiffer. Both are Division III programs.

It was a rewarding trip for Stouder, Both former Cougars thrived with her in attendance — sophomore Perry had 10 points and six rebounds, while freshman Isley accounted for 12 and 5. Guilford is the stronger team this season at 8-3 and won the game 77-61.

Isley has been versatile and efficient for the Falcons and has moved into a starting role. She’s started five of nine games and is averaging 7.8 points and 6.0 rebounds.

Isley’s Pfeiffer teammate, Jaleiah Gibson, who played an important role for Salisbury’s 2021-22 state champs, has started every game as a freshman and averages 2.3 points and 4.0 rebounds. Gibson’s defense has helped her earn a starting assignment, but foul trouble has limited her minutes and her stats.

Perry, who overcame two knee surgeries in high school, is averaging 6.9 points and 4.8 rebounds and has started every game for Guilford.

Colbie has experienced some struggles this season, but she got a chance to start on Monday and scored 14 points in what could be a breakout game in a 71-55 loss to St. Augustine’s.

Her 3-point shot will give her chances to get on the floor and she made four from long range on Monday.

Not surprisingly, North Rowan grad Hannah Wilkerson has been excellent as a freshman for Columbia International, the NAIA program in South Carolina where South Rowan grad Kira Rymer is a volleyball superstar. Wilkerson is averaging a team-high 12.0 points per game as well as 4.8 rebounds. She’s missed the last two games with either illness or injury, but she started the first 12.

Bryanna Troutman, the former Salisbury star, is a D-II star at Wingate, where she is the reigning South Atlantic Conference Player of the Year.

Troutman was off to a solid start this season — 12.7 points and 6.7 rebounds per game — but she’s been out for Wingate’s three two games. Wingate lost Monday without Troutman but is a strong 8-2 squad.

Carson grad Mary Spry and former South Rowan phenom Janiya Downs have helped Catawba get off to a 9-3 start.

Downs, a senior starter, has been in a little bit of a shooting slump lately, but she still averages 10.3 points, 4.3 rebounds and 1.9 assists.

Spry has been a key addition to the Indians’ bench. She’s averaged 5.2 points and 2.8 rebounds in just 10 minutes per game.

West Rowan graduate Abigail Wilson is now a junior at UNC Asheville, and while she’s not a star, she’s been a very solid player in Division I. She’s been in a starting role for most of the games in all three of her college seasons and averages 5.7 points and 3.9 rebounds. She’s scored in double figures three times this season.

There are other Rowan girls on college rosters, helping programs but not playing a lot, including Catawba’s Gabby Blabon (West) and Concord’s Caroline Houpe (East).

There are quite a few recruitable seniors in the county this season. Salisbury’s Kyla Bryant, Icesis Nwafor and Haley Dalton and West Rowan’s Jamecia Huntley have offers, as does South Rowan’s Mackenzie Chabala who plays for the 1 of 1 Prep Academy.

There are many future college players in a deep and talented junior class.