Son will live on in foundation to help others 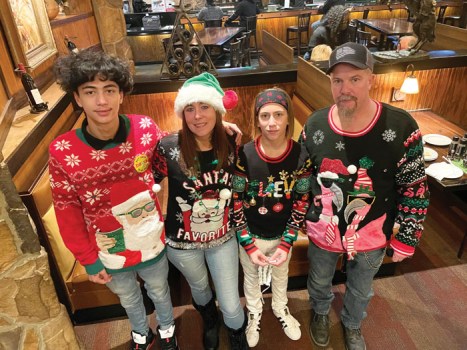 McDougall with Steadman and his younger brother, Kade, and his father, Jace. The family was celebrating Christmas at Longhorn Steakhouse on Dec. 24, 2020, three days before Jace got into the car accident. Submitted/Nichole Steadman. 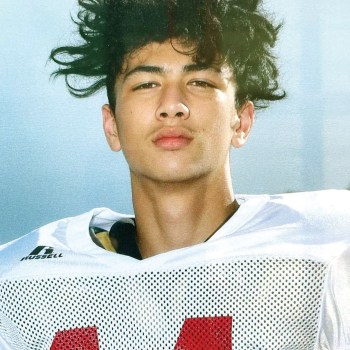 McDougall poses for his ninth grade football pictures. This is Steadman's favorite picture of her son. Submitted/Nichole Steadman. 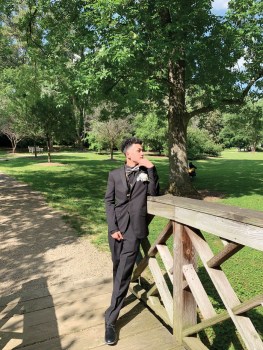 McDougall poses for a picture at Dan Nicholas Park before his junior prom. Submitted/Nichole Steadman.

WOODLEAF — Losing a child is one of the most devastating things that can happen to anyone, but finding a way for them to live on by benefiting others is a way of easing that loss in some small way.

Nichole Steadman, a teacher at Koontz Elementary School, is doing just that for her son, Jace Landon McDougall, by launching a charitable foundation to provide medical care for patients with traumatic brain injuries. She lost Jace, a West Rowan High School graduate, to suicide in May 2022, as he struggled to recover from a devastating car accident in December 2020 that left him with a traumatic brain injury.

After his accident, she says, “he was released by his doctors for his overall physical health, but there was really not a whole lot with the mental aspect of it. There was never a ‘you should get him into psychotherapy’ to make sure his mental state isn’t compromised.”

Steadman says McDougall struggled for months to recover, and Steadman is convinced that the TBI lead to Jace’s suicide. Her belief is supported by medical documentation, and a growing body of research.

The Centers for Disease Control and Prevention defines a traumatic brain injury as “an injury that affects how the brain works” and as “a major cause of death and disability in the United States.” According to the most recent data, in 2019 there were more than 223,000 hospitalizations related to traumatic brain injuries and 15 percent of all U.S. high-school students self-reported one or more concussions within the preceding year, mainly due to sport or recreational activities.

With her fundraising, Steadman wants to help other patients get the physical and mental health care they need. She wants to contribute to brain injury research. And she wants the foundation to be a support for other families’ recovery.

“If I can stop something like this from happening to another mother or another family member, then it will all be worth it,” Steadman said.

The accident and the aftermath

On Dec. 27, 2020, McDougall was a passenger in a car with four friends from a night out when the car he was riding in crashed into a tree. The driver received minor injuries. McDougall, who was sitting in the middle back seat, hit his head several times in the car causing the brain injury. The two other passengers who were also in the back seat received extensive injuries, with one later dying.

McDougall was airlifted to Atrium Health Wake Forest Baptist’s intensive care unit where he was put into a medically-induced coma for five days. When he woke up, he spent a few more days on the intensive care floor and in the hospital’s trauma bay. He then spent two weeks at the J. Paul Sticht Center for brain rehabilitation. Altogether, McDougall spent almost a month in the hospital recuperating from the accident.

Before the crash, Steadman described McDougall as a handsome young man with flowing black hair and big, brown eyes that shined whenever he talked about something that excited him. He was fun-loving, energetic and got along with everyone and excelled in his classes. He had a love for hip-hop music. Steadman would constantly find him in his room writing raps, recording them into his microphone and uploading the songs on his active SoundCloud page where he went under the rap moniker “DoPEMAN.”

“His teachers loved him, he was an honor-roll student,” she said. “His friend’s loved and adored him very much.”

But after the crash, McDougall’s brain injury caused him to withdraw from the people in his life. He would have drastic mood swings, going from his normal, cheerful self to extremely angry in a flip of a switch.

Steadman described seeing the light that was once so prominent go out of his eyes.

“His temper got worse, he was more on edge, you could tell,” she said. “We could be having a normal conversation and then he would get really upset and hang up on me, then call me back five minutes later and carry on the conversation as if nothing happened.”

McDougall’s doctors recommended he continue occupational therapy and physical therapy for a month once he left the hospital. He took medications for “brain fog,” a common symptom of traumatic brain injuries where a person can have trouble concentrating, slowness in thinking and difficulty remembering and learning information.  He went back for check-ups with his neurologist to make sure his brain bleeds hadn’t returned or worsened.

But to Steadman’s knowledge, none of his doctors recommended he see a therapist or psychiatrist for the mental issues McDougall started to develop.

McDougall withdrew from people and conversations. He struggled with impulse control. Steadman described him as “checking-out,” —  he would be fully engaged then, in a second, he wouldn’t know what was going on.

In early 2022, McDougall developed suicidal ideation. He would talk to his mother about suicide, which worried her because of his struggles with impulse control. He returned to the hospital where, according to Steadman, he was sent away because “he wasn’t suicidal enough.” He tried another and spent two days in a psychiatric ward where he received a brain scan. He did not talk to a therapist who could assess him.

Steadman is convinced that if her son received more attention from mental health specialists or if doctors had recognized the need for intervention for his mental health during his treatment following the accident, all of this might have been avoided. So she decided to start the foundation.

If you or anyone you know has experienced a traumatic brain injury and mental health effects, you can contact the foundation here or email jltbiaaf@outlook.com. You can also email your story to be featured on the foundation’s website.