Placing wreaths to honor, and remember, those who fought for us 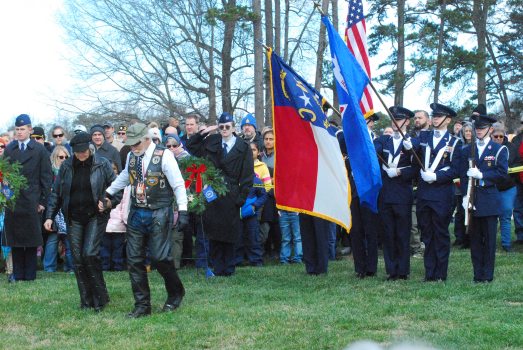 During the formal Wreaths Across America ceremony at the Salisbury National Cemetery Annex on Saturday, families of fallen veterans placed wreaths at the flags in the middle of the park while onlookers paid respects. 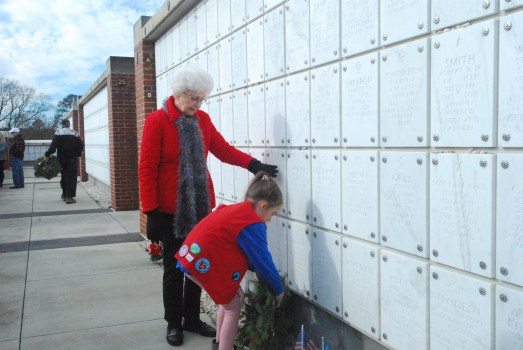 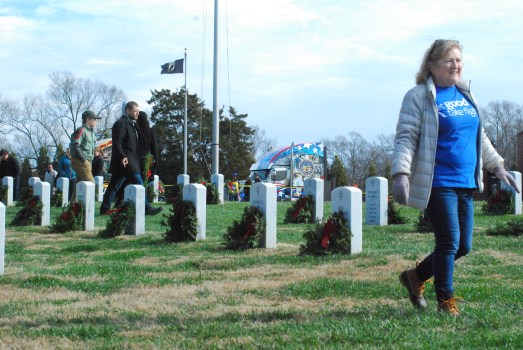 Headstones throughout Salisbury National Cemetery were adorned with wreaths during a special ceremony on Saturday. The event was part of Wreaths Across America.

Every December, millions of people visit national cemeteries on National Wreaths Across America Day and pay tribute to the military veterans laid to rest there.

The day’s significance varies from person to person, but in each case, everyone has a story to tell.

On Saturday, the Salisbury National Cemetery Annex was full of visitors who came to pay their respects. One group among them was Boy Scouts Troop 351 from Faith.

“This is a yearly tradition for our scout troop,” said John Dobbs, one of the troop’s leaders. “The day before the event, all the Scouts and Scoutmasters come to our building. We will have a meal and a big fire. We let them watch movies, play games and have a good time, with no real agenda.”

However, come sunrise, the day takes on a new meaning beyond scout camaraderie.

“We always try to get them involved in the community with volunteer work,” Dobbs said. “It goes toward their work as Boy Scouts and gives them a feeling of reverence.”

“We explain to them the importance of the event and why we come here to show our veterans who have passed away, in service or after service,” Dobbs said. “We show our respect and acknowledge their service.”

For another family at the event, it was a little more personal.

After the formal ceremony, the families and organizations dispersed around the cemetery to find the headstones they wished to adorn with wreaths.

Dolores Cummings, of Statesville, and her great-granddaughter, Lucie Simmons, found the tomb of Cumming’s husband, Harold.

“He was in Korea right after the war,” Cummings said. He was in the DMZ (the demilitarized zone between North and South Korea), where he intercepted messages. That was in 1956 and 1957.”

Cummings got home in January 1958. He and Dolores lived in Ft. Lauderdale, Florida, for many years.

“He was an electrical inspector for the city,” Cummings said.

As time rolled on, they raised a family together, which Cummings boasts is now 14 great-grandchildren strong.

“It’s a special moment to be able to come and do this with everyone in general,” Simmons said. “It’s very heart-warming.”

As the family reminisced about their fallen patriarch, Cummings explained the inscription, “I love you, honey,” on her late husband’s headstone.

“That is what I told him every night in the bed before we went to sleep,” Cummings said. “I would rub his arm and say I love you, honey, and if this is the last thing I say to you, I want you to know I love you. That is why I put that on there.”

Wreaths Across America is a nonprofit organization founded after Maine resident and businessman Morrill Worcester began an annual wreath-laying ceremony at Arlington in 1992. The ceremony has now expanded to include cemeteries in all 50 states.

According to the organization, “The annual tribute went on quietly for several years, until 2005, when a photo of the stones at Arlington, adorned with wreaths and covered in snow, circulated around the internet. Suddenly, the project received national attention. Thousands of requests poured in from all over the country from people wanting to help with Arlington, to emulate the Arlington project at their national and state cemeteries, or to simply share their stories and thank Morrill Worcester for honoring the nation’s heroes.”