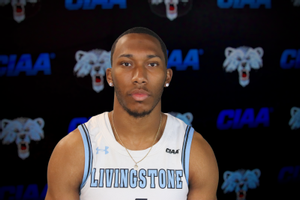 SALISBURY — Overtimes are becoming a habit for the Livingstone College men’s basketball team.

Last Thursday they lost in OT, but on Monday they won in OT, taking an exciting 101-92 victory against Virginia Union, one of the CIAA’s storied programs.

Livingstone (6-6, 2-1) was out-rebounded and lost the turnover battle, but a great shooting night can compensate for a lot of ills.

The Blue Bears were on target, shooting 55.6 percent from the field. Livingstone was extraordinary from the 3-point line — 13-for-24.

Most of the whistles were favorable and the free-throw line proved to be Livingstone’s friend. The Blue Bears shot 41 free ones and made 28. They outscored Virginia Union (10-2, 1-1) by 11 from the foul line.

Arion Broadnax and De’Marr McCrae were the leaders for the home team at New Trent Gym in front of 255 fans.

Livingstone overcame a 33-point effort by Virginia Union’s 6-foot-5, 230-pound forward Robert Osborne, who shot 14-for-24 and had 11 rebounds. Guard Mahzi Thames scored 22 for the Panthers.

Livingstone took a 41-40 lead at halftime.

The Blue Bears led by nine with a little over five minutes left in regulation, but Virginia Union made a run and caught up with three minutes left.

Osbrorne’s layup with 19 seconds left put the Panthers on top by two. Livingstone got it to overtime at 84-all when McCrae got a stick-back with one second left in regulation.

Early in the overtime, 3-pointers by Teon Tiller and Lassiter put the Blue Bears ahead to stay.