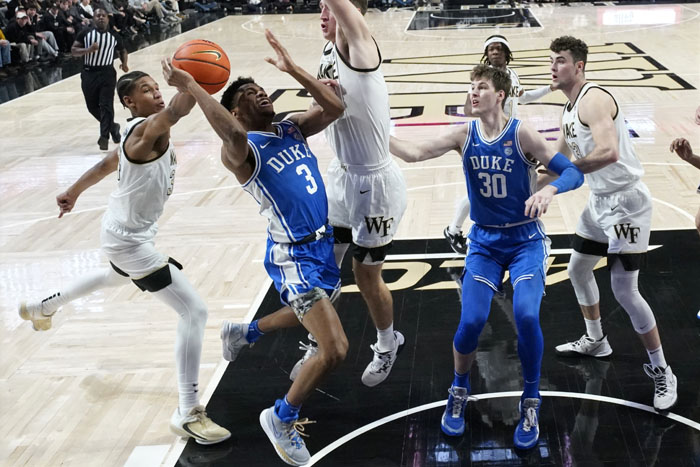 Cameron Hildreth added 16 points and nine rebounds for the Demon Deacons (9-4, 1-1 Atlantic Coast Conference), who took down their highly ranked instate rival with a confident performance that had them leading nearly the entire game.

Wake Forest led 39-30 at halftime, then pushed that margin to as many as 15 points. More impressively, the Demon Deacons never let the Blue Devils — playing short-handed with two top freshmen out — closer than seven after the break.

That meant getting into the paint to put the pressure on Duke. Or avoiding live-play turnovers when the Blue Devils tried some traps to speed up play and force the Demon Deacons into mistakes.

It was a strong response from a team coming off a 24-point loss at Rutgers, with Wake Forest shooting 49.1% and getting plenty of balance with five double-figure scorers.

Jaylen Blakes scored a career-high 17 points to lead Duke (10-3, 1-1), who never showed much of the strong-defense, tough-rebounding form that had carried the Blue Devils through the start of Jon Scheyer’s coaching tenure.

It didn’t help that starting freshman big man Dereck Lively II and rookie wing Dariq Whitehead were out due to non-COVID illnesses. That essentially shrunk Duke’s rotation to seven players who were unable to consistently get stops or keep the Demon Deacons off the glass.

By the final seconds of this one, Hildreth was motioning to the crowd for more noise as he let the ball bounce in front of him, while Damari Monsanto started high-fiving fans in courtside seats as the horn sounded.

Wake Forest: This was the Demon Deacons’ first win against Duke since a memorable double-overtime win in 2020, before Steve Forbes had taken over. He lost the ACC player of the year in Alondes Williams and a first-round NBA draft pick in Jake LaRavia from a team that nearly made the NCAA Tournament, yet Forbes’ quick retooling has secured a quality win against a Duke team boasting the nation’s top recruiting class.

Duke: The Blue Devils are off through the Christmas holiday and return at home against Florida State on Dec. 31.

Wake Forest: The Demon Deacons also have a lengthy break before hosting Virginia Tech on Dec. 31.

Claude added 10 rebounds for the Catamounts (7-6). Tyler Harris scored 13 points while shooting 5 for 8, including 3 for 6 from beyond the arc. Marlow Gilmore had 13 points and three blocks.