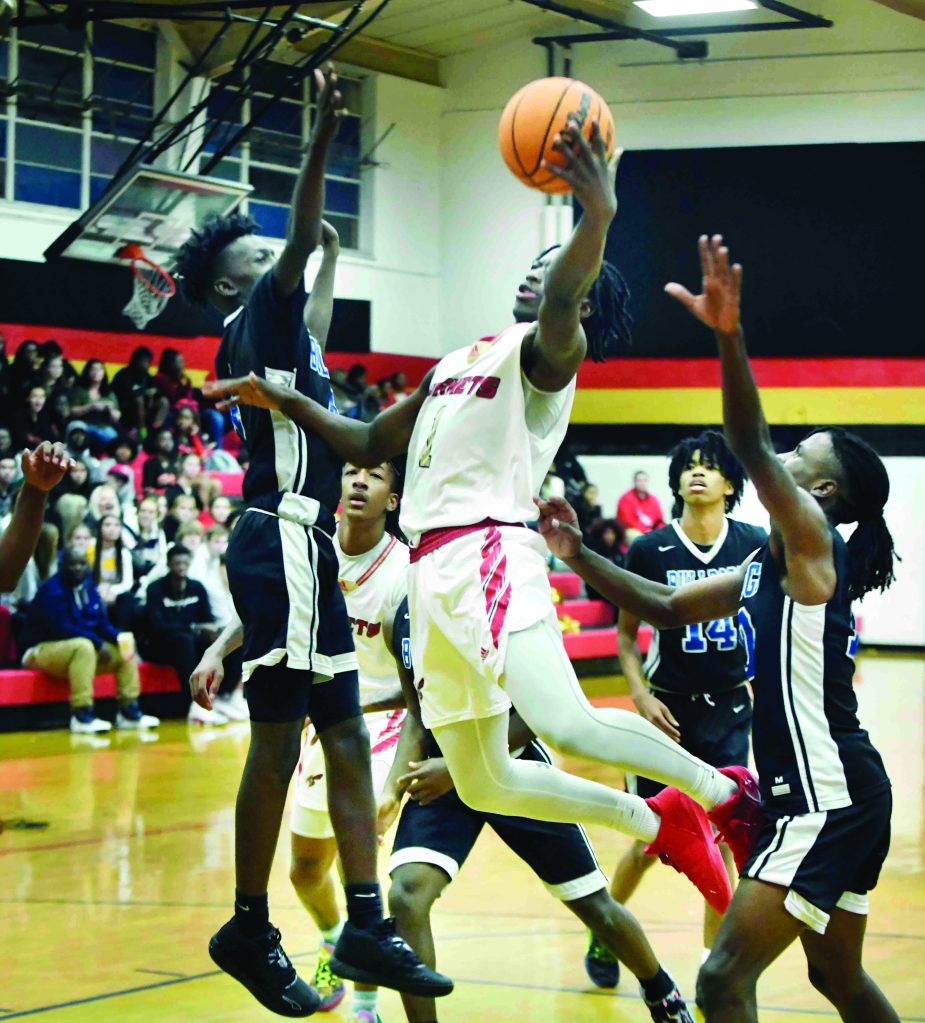 The 2A Hornets had every chance to win but two late 3-pointers wouldn’t drop, and Smith’s 3A Golden Eagles took a 69-66 victory.

Physically, it was a major step up from the level of competition the Hornets normally encounter in the 1A/2A Central Carolina Conference.  It was a positive that the Hornets showed they could compete with serious muscle and serious quickness and they fought hard. Salisbury guard Mike Geter, who scored a season-high 17, embraced the challenge. He was all over the place, more aggressive offensively than usual, and rebounding like a demon.

Deuce Walker was solid, taking it to the rim fiercely. He scored a dozen.

At times, Smith’s 6-toot-7 Jahlil Green made it look like the teams were playing on a 9-foot goal. Green, who can get airborne in a hurry, smashed three dunks in his part-time role and he missed on some other flush attempts.

Salisbury’s highly recruited star Juke Harris, a 6-foot-6 guard, normally just shoots over people at will when he gets in the lane, but Smith’s athletic guards swatted two shots right back at him in key situations.

Harris got 24, but it was a hard 24 that required a lot of shots. Nothing was easy. He made three 3-pointers. He made several acrobatic, hanging 2s on drives against multiple defenders, and while he missed some critical free throws, he did make seven.

Smith led 17-13 after the first quarter.

The Hornets played an inspired second quarter, feeding off Geter’s relentless energy and effort. Geter and Harris had nine each in the quarter, and when Bryce Dalton flipped in a 3-pointer at the halftime buzzer, the Hornets were only down 39-38.

Harris made a long 3-pointer for a 43-41 lead early in the third quarter, and the Hornets surged ahead by as many as eight points on a bucket by Geter.

That’s when the Golden Eagles (8-1) turned up the defensive heat. Holding Salisbury (5-3) scoreless for four frustrating minutes, Smith rattled off 10 unanswered points for a 62-55 lead.

Geter finally ended the drought for the Hornets with a hoop, and then he fed Walker for the layup that made it 62-59.

With the Hornets down 67-62, Harris made two free throws with 50 seconds left to play.

After Smith turned it over against Salisbury’s press, Harris lined up a left wing 3-pointer for the lead. It rattled around the breakaway rim, but the ball refused to drop.

CJ Neely made two clutch free throws to give Smith a 69-65 lead.

Salisbury got the ball back for one last try in the final seconds, and with Smith focusing its attention on Harris, Dalton drove and kicked to Geter for an open 3-point look, straight on. It was a  shot that would have forced overtime.

It stayed on the rim for a while but wouldn’t drop, and a spent Geter collapsed to the floor in anguish.

Smith held the Hornets to three field goals in the fourth quarter, and Harris’ only points in the final eight minutes came at the foul line.

Junior guard Gage Lattimore, who did a lot of the defensive work against Harris, led Smith with 16 points.

Next for the Hornets is a game against undefeated 4A Olympic (8-0) in Charlotte on Thursday,  The Hornets are scheduled to play the winless Garinger Wildcats (0-10) on Friday.

SPENCER — It was a forgettable Saturday for the North Rowan Cavaliers, as they were smashed 79-37 by Robinson.

North was shorthanded with Kemon O’Kelly out with an injury and Amari McArthur, who played great on Friday, missing due to a scheduled football recruiting visit to Lenoir-Rhyne.

North still hasn’t suited up Dyzarious Carpenter, expected to be one of their better players but injured in the preseason. He is expected to return to action around the end of the month.

Robinson (6-2)  is 2A and is moving up to 3A next fall. The Bulldogs are good. They’ve beaten Concord and Northwest Cabarrus, two of the better teams in the 3A South Piedmont Conference, and they won their league opener against North Stanly by 45.

North got four 3-pointers and 14 points from George Maxwel, but he was the only one in double figures. Jeremiah Alford scored nine.

Jermaine Gray and Daevon “The Mutant” Hobbs scored 15 each for Robinson.

Hobbs, listed at 6-foot-6,  weighs in the 260 to 270 range, plays defensive end and is a football phenom committed to Tennessee.

It’s a non-conference loss North should be able to flush with no problem. It won’t mean much in the big picture, and the Cavaliers can one day tell their grandchildren they played against Hobbs.

North is scheduled to play at Carson on Tuesday in a game that will determine the top seed for the Dale’s Sporting Goods Sam Moir Christmas Classic that will not have Salisbury in the field.

North (4-4) has sustained some lopsided losses but could still have the best record of the five teams in the event. Seeding is based solely on pre-Christmas records.

It’s wide open, but West, which has won three in a row and has won against North and Carson, looks to be the favorite no matter where the Falcons are seeded.