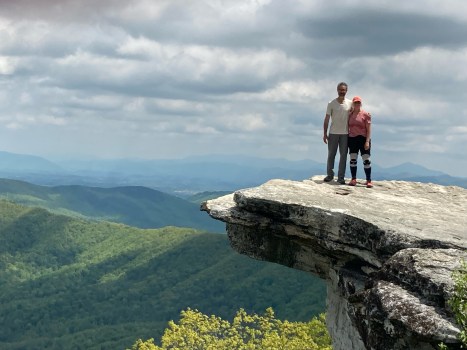 Rodney and Robyn Arey take a breather on Mcafee Knob in Roanoke, Virginia. 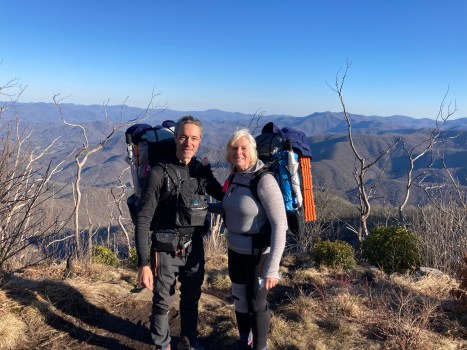 The Areys' thru-hike of the Appalachian Trail took them six months. Submitted photo 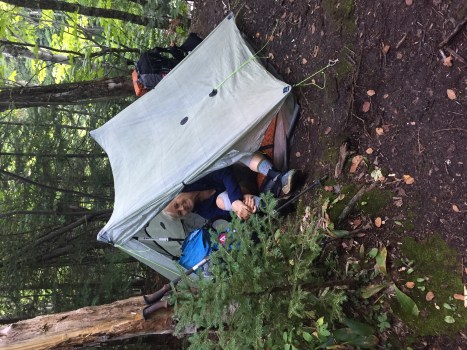 Along the way, the Areys pitched tents 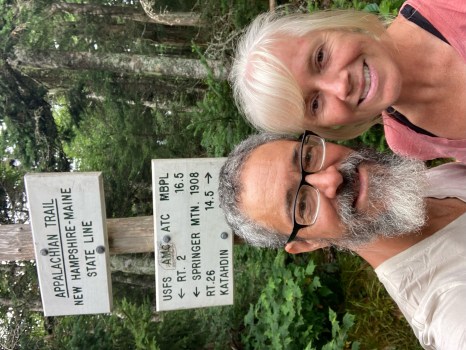 Nearing the end of the 2,200-mile journey, Rodney Arey has a full beard to show for it.

SALISBURY — Two long-time Salisburians decided to take the trip of a lifetime earlier this year.

Billed as their “second honeymoon,” Robyn and Rodney Arey turned in an early retirement in February and set off on a thru-hike of the Appalachian Trail — all 2,200 miles of it.

Six months later, the couple ascended Mt. Katahdin, the trail’s northern terminus. At 5,239 feet above sea level, the Areys could see just how far they had gone.

Although the hikers set out from Springer Mountain, Georgia, in February, the desire to make the trek had been building for years.

A love for the outdoors united Robyn and Rodney from the beginning of their marriage.

“On our first honeymoon, we drove across the country,” Rodney said. “We got married and spent three months just living out of the car and camping. We hit every national and state park between here and Alaska. We drove 10,000 miles one way to Alaska, camping the whole way.”

That was in 1988. Then life happened. The couple raised a family, one daughter, Whitney, and one son, Dylan. They worked jobs at Power Curbers in Salisbury. Rodney was the continuous improvement coordinator, and Robyn was the parts manager.

“I said when we retire, we’re going thru-hike the Appalachian Trail,” Rodney said. “(Robyn) agreed somehow, and I am not sure why. We have always loved to be outdoors, camping and backpacking.”

In the lead-up to the hike, the scale of the challenge in front of them seemed daunting at times.

“We are old, so we’re pretty slow,” Rodney said. “We set down before we ever started, bought some trail maps… We started looking at mileages and what we thought we could do. Then we realized there are so many variables.”

They would not be deterred even when blustery February weather dampened their launch.

“Our kids took us up to the trailhead, rolled the window down, and waved at us as we got out in the rain,” Rodney said.

Robyn added, “Once you get started, your plans change quite rapidly. You think you can walk all day long. Surely, you can do 15 miles. We did eventually, but not initially.”

Although Mt. Katahdin and Maine were more than 2,000 miles away, the Areys were happy to take it all in stride.

They found comfort in small things and never took a meal for granted. Robyn has always been a vegetarian who lives on salads, greens and vegetables, which she laughed and said was not exactly “conducive to trail walking.”

Rodney added, “We had a lot of tuna packs and those dehydrated potatoes. Just add water. That was my favorite meal.”

Occasionally, there were stumbles.

“I had several falls that were painful,” Robyn said. “But you get up and you keep walking unless it is something you need a helicopter for. We were fortunate that it was just things that were minor enough that it didn’t take you off the trail.”

“Our kids wouldn’t let us leave without a Garmin GPS tracker, which turned out to be the coolest thing we did,” Rodney said. “There is a link to that service, so anybody we gave the number to could track us at any time. It was nice. Both our parents loved to keep up with us. When we would get to a town and call home, they would know exactly where we were.”

So, the couple spent the spring and summer heading north and took whatever the trail would throw at them, although Robyn indicated that it could have been worse.

“It got cold again when we got up to New Hampshire and Maine,” Robyn said. “All in all, we really didn’t have that much bad weather for six months.”

Heavy snow accumulation pushed back the opening for Mt. Katahdin. The park prohibited hikers from visiting the trail’s northern terminus until June 1, but that did not impact the Areys’ trek.

Throughout the hike, Robyn and Rodney met countless other adventurers and made a few friends along the way.

“Some friends we met on the trail had recently relocated to Portland, Maine,” Rodney said. We summited (Mt. Katahdin) at the same time they did. When we came down, they said, ‘We’re heading back to Portland. We’ll give you a ride.’ ”

“There is nothing out of Baxter State Park,” Robyn said. “When you hit New Hampshire and Maine, you are super remote.”

Rodney added, “We jumped in the car with them, and three hours later, we were in Portland on the coast, where we could jump on an Amtrak and get off at the depot here in Salisbury.

It was the perfect last leg of the trek for two recent retirees who decided to cast the itinerary to the curb.

“We wanted to take a train ride,” Robyn said. “We don’t have any schedule for when we have to be back home. It took like 20 hours because it stopped at every town coming and going. But it was fun just to do it.”

What lies in store for the Areys’ next adventure is anyone’s guess, but don’t expect them to sit tight for too long.