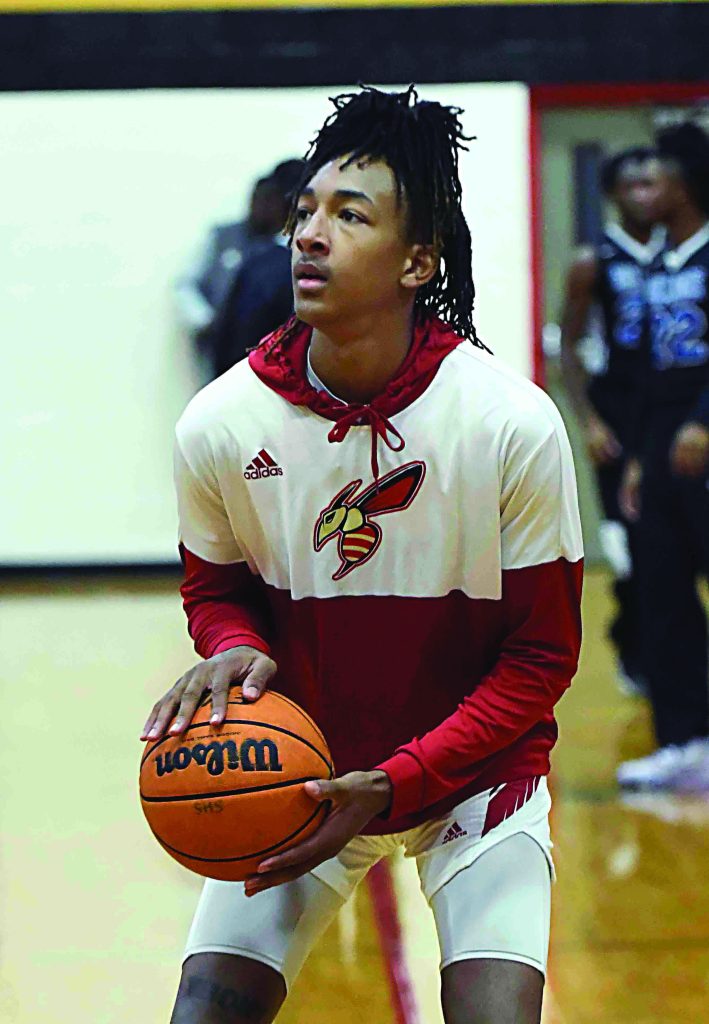 Salisbury's Juke Harris.Photo by Wayne Hinshaw, for the Salisbury Post

DENTON — Propelled by one of the all-time great starts to a high school game, Salisbury junior Jayden Harris scored a career-best 42 points in a 77-60 win at South Davidson.

The 6-foot-6 Harris got the first hoop of the Central Carolina Conference contest with a 3-pointer, dunked a lob and then got two layups off steals by teammates. After 75 seconds, Harris had nine and the Hornets led 9-0.

He was just getting warmed up.

He hit 3-pointers for 12-0 and 15-0 leads and had 15 points after two minutes, giving a whole new meaning to the two-minute drill.

Mike Geter made a layup off a pass from Deuce Walker for the first non-Juke points for the Hornets. Then Harris scored four more.

It was 21-0, with Harris accounting for 19, before South Davidson finally got on the board.

Harris had 27 points at halftime and the Hornets, who shared the ball and got a lot of easy buckets off defense, led the Wildcats 49-21 at the break.

Salisbury (5-2, 1-1) couldn’t maintain its early intensity in the second half, but Harris made two 3-pointers in the third quarter as the Hornets maintained a safe 60-43 lead.

That shot caused a brief stoppage of play as Harris as posed for photo to commemorate his 1,000th  point.

He almost certainly has more than 1,000, but it has not been possible to verify all the points he scored when he was an eighth-grader playing varsity ball for North Hills. But adding the points from North Hills games that have been confirmed to the points he scored as a West Rowan freshman to the points he has scored during his two seasons with the Hornets, he officially has passed 1,000. He needed 37 for the milestone prior to Friday and got 42, It was an unusual 42 in that it included only two made free throws.

Harris floated in for a layup with 35 seconds left for his final points.

Harris, who had a number of opportunities to take more shots and go for 50, gave the ball up quite a bit. He had four assists and might have doubled that total if the Hornets had made more shots in the second half.

Deuce Walker was a factor with eight points and six steals. Hank Webb had a ton of chances around the rim and contributed nine points and nine rebounds. Bryce Dalton had seven assists.

Salisbury is right back at it on Saturday, traveling to Greensboro to face Ben L. Smith.

The Falcons (3-5, 2-1) won their third in a row for first-year coach Dadrian Cuthbertson after getting off to an 0-5 start that included three down-to-the-wire losses.

Will Givens Jr. was on target again for West, making four 3-pointers and scoring 20.

Givens got the Falcons rolling with an eight-point first quarter. Adrian Stockton had six of his eight points in the second quarter.

“We played hard and shared the ball,” Cuthbertson said. “We’re working, just trying to get better every game.”

Zion Jackson, Elijah Anderson and Drew Blackwell scored four each to lead the Raiders, who have dropped seven straight since an opening-night victory.

The Knights overcame a 25-point effort by Carson sophomore Colin Ball, who scored a career-high 25 for the second straight game.

Ball made three 3-pointers. He scored 10 in the third quarter as he tried to lead a Carson comeback from a 10-point halftime deficit.

Carson (3-4, 0-3) normally can put at least three in double figures, but it was a cold shooting night, with the Cougars failing to reach 50 for the first time this season. Mikey Beasley scored eight. Cameron Burleyson made two 3-pointers.

The 6-foot-6 Harris, who is averaging 25.5 points per game, scored 21 points to give East a slim halftime lead.

East (1-5, 0-3) got 16 from Dylan Valley and a career-best 14 from Jonathan Wemboula, but lost its fourth straight since knocking off North Rowan.

The Mustangs had a real chance to get a signature road win. East was only down two entering the fourth quarter, but the Trojans had a strong finishing kick and pulled away.

East didn’t get many stops — or rebounds — during Northwest’s 26-point fourth quarter.

“They got too many extra opportunities on the offensive end and that hurt us,” East coach Andrew Porter said.

East has been productive offensively but has allowed 75 or more points in every loss and has given up 80-plus three times.

“This was a really good effort on the road,”  Porter said. “We’re a good team and we’ve shown it. We’ve just got to get better at the little things and get better at finishing games. If we can do that, we’ll be really dangerous and we’ll start getting some wins.”

East has another pre-Christmas game, taking on North Davidson on Tuesday.

SPENCER — North Rowan is starting to show signs of putting things together.

With George Maxwell pouring in six 3-pointers and a career-high 30 points, the Cavaliers beat East Davidson 82-57 for a Central Carolina Conference win.

“Our best game,” said North coach Jason Causby, who logged his 250th win as a head coach in Rowan County. “We shot the ball like I hoped we would coming into the year. A lot of that came from moving the ball better and making the extra pass.”

Maxwell wasn’t the only Cavalier who played lights-out.

Amari McArthur tied his career high with 18 points. He made four 3-pointers, handed out seven assists and grabbed six rebounds.

“The best he’s played, very active and under control,” Causby said. “He’s getting back into basketball shape after the football season. He told me before the game he felt good and that’s as good as I’ve seen him.”

Jaemias Morrow and Jeremiah Alford added eight points each. Jayden Polk didn’t score big, but he had a strong night on the boards.

The Cavaliers will be shorthanded. McArthur will be on a football recruiting visit to Lenoir-Rhyne. North is still awaiting the season debut of Dyzarious Carpenter (thumb) and Kemon O’Kelly is out with injury.

Despite a three-game losing streak that included losses to East Rowan and West Rowan, North has a chance to be the No. 1 seed in a Christmas tournament field that will not include Salisbury.

A.L. Brown is playing in a large tournament in the Pembroke area, and the Wonders beat Lake View, S.C., 48-34 for their second win of the season.

Naz Reaves led the Wonders with 12 points and eight rebounds.

The Vikings led 23-2 after a quarter and scored 57 in the first half.

Gavin Bullock made five 3-pointers and scored 22 for unbeaten Central.