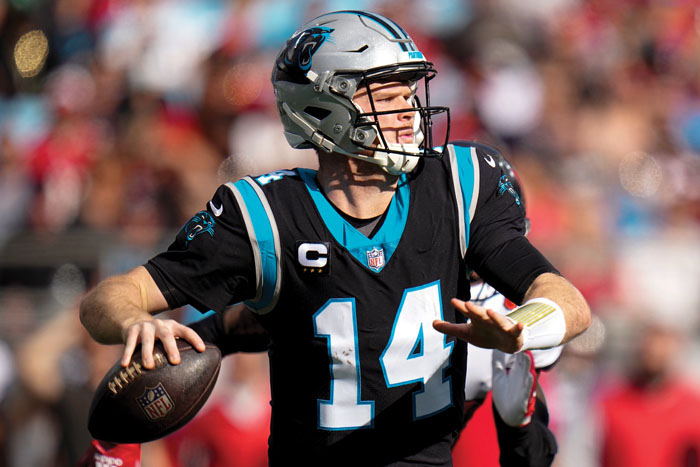 Sam Darnold will be the starting quarterback for the Panthers against the Steelers on Sunday. Associated Press file photo

CHARLOTTE — Sam Darnold spent the better part of this season on the sideline in a boot, learning the importance of patience while watching other quarterbacks play.

Those lessons appear to be paying off.

Darnold is 2-0 since taking over as Carolina’s starting quarterback and has the Panthers (5-8) in control of their playoff destiny with four games remaining. If the Panthers win out, beginning Sunday at home against the Pittsburgh Steelers, they’ll win the NFC South.

“I think the biggest thing I learned was patience,” said Darnold, who was 4-7 as Carolina’s starter last season. “When I’m back there, I’m taking the shots when they are there, but at the same time being patient and understanding what the situation is. First and second down, you want to stay ahead of the chains, and then on third down being able to go through my reads and use my legs if I have to.”

The No. 3 pick in the 2018 NFL draft hasn’t put up eye-popping numbers by any means, throwing for 284 yards and two touchdowns in two starts.

He hasn’t needed to.

With the Panthers running the ball so effectively, Darnold’s biggest task has been managing the game and not turning the ball over.

“I love fact that he is protecting the football,” Panthers interim coach Steve Wilks said. “That is critical and key for our success.”

Darnold has led 20 drives (excluding those ending in kneel downs) and the Panthers have scored five touchdowns and six field goals in wins over Baltimore and Seattle. They’ve not turned the ball over.

Steelers defensive coordinator Teryl Austin said the Panthers have “settled down” with Darnold under center.

“He’s doing some things with his feet, getting out of some jams that way with some long runs and scrambles and keeping drives alive,” Austin said. “You can kind of see that’s the way they’re going. They’re going to run. They’re going to take their shots. He has the ability to make all the throws.”

COMMITTED TO THE RUN

The Panthers ran the ball 46 times for 223 yards in last week’s 30-24 win over Seattle and have made no secret about their offensive identity being running the football.

The Panthers called runs on 16 of their final 18 plays over their final two possessions against Seattle to close it out.

The Steelers got run over last week in a loss to Baltimore, giving up 215 yards rushing even though the Ravens were playing without injured quarterback Lamar Jackson and lost backup Tyler Huntley early in the second half.

“The ball snaps, you kick butt or you get your butt kicked,” Steelers coach Mike Tomlin said. “Football is a legitimate humble man’s game.”

WE HAVE THE MEATS!

One notable example of Carolina’s commitment to running the ball is the team lining up against Seattle with eight offensive linemen on the field for one play. It’s a formation they call “Arby’s.”

Guard Brady Christensen explained that’s because of the company’s slogan: “We have the meats!”

“I like that nickname, it’s cool,” Panthers running back D’Onta Foreman said. “If you are all out there, Arby’s, hook my men up.”

Tomlin’s next losing season as an NFL head coach will be his first.

Yet with a month left in his 16th year on the job, Pittsburgh’s wiggle room to avoid one in 2022 is gone. The Steelers need to win out or Tomlin’s long run of sustained success will end.

And the players know it.

“Something that means a lot to me is Coach T,” defensive tackle Montravius Adams said. “Never had a losing season and I just don’t want that to be under my belt. He’s a guy that when I came in, gave me a lot of morale to play better and I’m sure a lot of guys in the locker room feel this way but we’ve got to get it right.”

The Panthers have been rewarded for their patience when it comes to kicker Eddy Pineiro.

There was some outside talk about Pineiro’s future after he missed a 48-yard extra point at the end of regulation and a field goal in overtime in a heartbreaking midseason loss to Atlanta. But instead of cutting Pineiro or bringing other kickers in for a tryout, Wilks threw his support behind him.

Pineiro has since made 12 of his last 13 field goals. He has now made 92.6% of his field goal attempts this season, making him the second-most accurate kicker in the league.

“We had no thought about bringing in a kicker,” Wilks said. “We had total confidence in Eddy and we wanted to make sure he got the support he needed. We put our arms around him and he’s been consistent since.”

TURNOVER DIFFERENTIAL: Steelers even; Panthers minus-2.

STEELERS PLAYER TO WATCH: WR George Pickens. The rookie has endured an uneven season but showcased once again last week against Baltimore that he is Pittsburgh’s best downfield passing threat by a wide margin, catching all three passes for 78 yards and drawing a pass interference penalty that set up a touchdown. He was only targeted once after halftime, however, a number that needs to tick up no matter who is at quarterback.

PANTHERS PLAYER TO WATCH: DT Derrick Brown has been the anchor of Carolina’s run defense this season. The 2020 first-round draft pick out of Auburn has 51 tackles and needs four more to tie Kawann Short (55 in 2015 and 2016) for the most tackles by a Panthers defensive tackle in a single season.

KEY MATCHUP: Panthers RBs D’Onta Foreman and Chuba Hubbard vs. Steelers defense. The Panthers are coming off a 223-yard rushing performance at Seattle, led by 74 yards each from Foreman and Hubbard. Carolina’s 223 yards are the second most this season and the second most league-wide in Week 14 in the NFL. Since Week 7, Carolina is fourth in the league with 237 rushing attempts and fifth in the league with 1,082 yards. Pittsburgh is allowing 115.8 yards per game on the ground.

KEY INJURIES: QB Kenny Pickett was limited in practice during the week after entering the concussion protocol for the second time in two months but will play if cleared. Coach Mike Tomlin did not commit to either Mitch Trubisky or Mason Rudolph if Pickett can’t go. … Pittsburgh lost DE Chris Wormley to a season-ending left knee injury against Baltimore. Steelers RB Najee Harris (hip), LB Myles Jack (groin), TE Pat Freiermuth (foot) and DT Larry Ogunjobi (toe) missed time during the week but will likely play. … Panthers WR D.J. Moore injured his ankle in Sunday’s game, but did return to practice on Wednesday and is expected to play. However, Moore did not have a catch last week against the Seahawks, and the Panthers may need to rely more on Terrace Marshall Jr, Laviska Shenault and Shi Smith against the Steelers if he’s banged up.

SERIES NOTES: The Panthers won the first matchup in 1996, a 16-14 victory that allowed them to win their first division title in just their second season in the NFL. But Pittsburgh has owned Carolina ever since, winning the past six matchups by an average margin of 36-13. All six of those Pittsburgh wins have been by at least 10 points, including a 52-21 triumph in 2018.

STATS AND STUFF: The Panthers will win the NFC South if they go 4-0 the remainder of the season. All four remaining games are against teams with losing records. … At 5-8, the Steelers need to win their final four games to avoid the first losing season of Tomlin’s 16-year tenure. … Pittsburgh’s run defense was pushed around last week against Baltimore even with the Ravens starting backup quarterback Tyler Huntley then going to third-stringer Anthony Brown. The Steelers gave up 215 yards on the ground and now have to face a Panthers club that has piled up 408 yards rushing over its past two games. … Steelers LB T.J. Watt picked up his first full sack since Week 1 last Sunday, but has just 2 1/2 sacks in six games and is dealing with a rib injury that likely won’t fully heal until the offseason. … Expect a close game. Those are the only ones the Steelers seem to play. Pittsburgh has been in 20 one-score games since the start of 2021, third most in the NFL behind Baltimore and Minnesota. The Steelers are 12-8 in those games. … If the Steelers win, Tomlin would become the third-fastest coach in NFL history to reach 160 wins (253 games). … Carolina is 4-3 at home this season. … QB Sam Darnold is 2-0 as the team’s starter since returning from a high ankle sprain that kept him on injured reserve most of the season. Darnold hasn’t turned the ball over in two starts. … RB D’Onta Foreman leads the Panthers with 637 yards rushing. … DE Brian Burns has 10 1/2 sacks and needs 4 1/2 more sacks this season to tie Kevin Greene (1998) and Greg Hardy (2013) for the franchise single-season record with 15. … PK Eddy Pineiro has connected on 25 field goals and trails just Seattle’s Jason Myers (Seattle) in field goal rate at 92.6%. Pineiro is currently tied for ninth in the NFL with 11 field goals made from at least 40 yards. … CB Jaycee Horn has been playing at a high level and had his third interception of the season against Seattle last week. Horn nearly had a fourth pick, but bobbled the pass as his momentum carried him out of bounds.

FANTASY TIP: Foreman has run for at least 100 yards in four of Carolina’s past seven games. And while the team reduced his role last week by giving more carries to Hubbard and Raheem Blackshear, he’s expected to be a major factor on Sunday.

AP Sports Writer Will Graves contributed to this report.