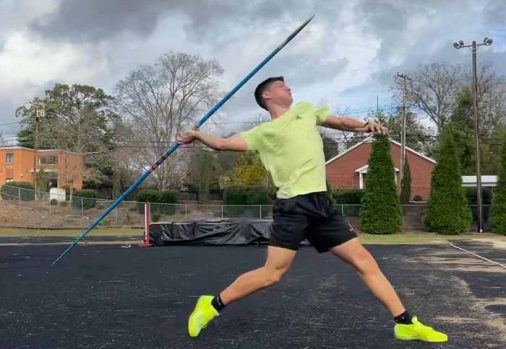 Submitted photo — Nate Shaffer shows his form with the javelin. 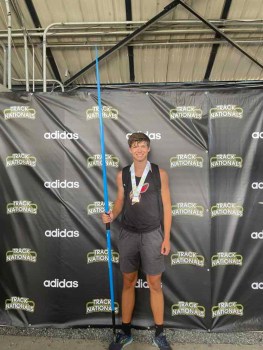 submitted photo Nate Shaffer says, ‘Javelin is a very technical sport. I’d compare it to golf in that it’s not how hard you can hit a golf ball, it’s how you hit it.’ 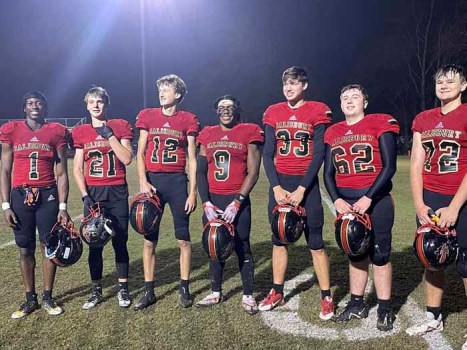 Shaffer is the first track and field signee announced by the Charlotte 49ers from this year’s class of high school seniors. He quietly has done quite a bit for Salisbury athletics, including serving as the football team’s long snapper.

“There was only one time this season when (kicker/punter) Hank Webb had to chase the ball around,” Shaffer said. “That’s when fans notice the long snapper.”

Shaffer is an all-conference swimmer. In the Central Carolina Conference Championships last winter, he had a second in the 200 freestyle and swam a leg on the winning 400 free relay team. He placed in the Rowan County Championships in two individual events.

Track and field is his passion. He’s competed in just about everything for the Hornets outdoors, except the jumps. He’s currently involved in indoor track, running distances such as the 300 and 500 meters that are different than the standard outdoor distances.

“I’ve been that guy our coaches can plug into a lot of different places when we’re trying to get points in a meet,” Shaffer said. “The 4×400 and 4×800, the shot put, the discus. I did some hurdling.”

He ran on a 4×800 team last spring that qualified for regional competition.

He finished first in the 300 hurdles in a few meets last season, although it ranks pretty far down on his list of favorite events.

“It’s not like I’m a great hurdler,” said Shaffer, who placed seventh in the Rowan County Championships.

What Shaffer is really good at, and the reason he is a Division I signee, is because he is a champion in an event that isn’t sanctioned by the NCHSAA. That’s throwing the javelin.

Javelin is an official high school sport in only 18 states, but almost every state has some grass-roots AAU competition.

There are reasons why javelin is not a high school sport in North Carolina. There are additional costs. There are shortages of fields to practice on and shortages of coaches with javelin experience. Mostly there are safety concerns, although it’s probably more likely for a spinning discus to get out of control and endanger spectators than a javelin.

The javelin is essentially a spear. In competition, there’s a sprint on a runway, a momentum-gathering charge before heaving the implement, so speed is required to excel.

There’s a lot of coordination needed to make the proper cross-over steps to get the javelin into optimum throwing position.

Then a successful throw requires a combination of leverage, balance, strength and flexibility.

Shaffer has a long, lean frame and can put all of those components together.

“Javelin is a very technical sport,” Shaffer said. “I’d compare it to golf in that it’s not how hard you can hit a golf ball, it’s how you hit it. With the javelin, strength isn’t the biggest factor. It’s how you throw it.”

Historically, there have been locals who excelled throwing the javelin in college.

Josh Lee was an A.L. Brown quarterback who went to Western Carolina University for football two decades ago. When he got stuck on the football depth chart, he transitioned to track and field and broke all the school javelin records.

About a dozen years ago, East Rowan’s Wayne Parker (Western Carolina) and Rebecca Cooper (East Carolina University) were multi-sport high school athletes who picked up the javelin in college. Cooper was asked to fling the javelin for the Pirates because a track coach happened to see a video of her throwing a softball from shortstop.

But Shaffer’s story is different than those late-blooming success stories. He has thrown the javelin almost half of his life. While he was still a student at Knollwood Elementary, he got involved with the Hurley YMCA Warriors, an organization that featured runners such as Noah and Eli Julian.

“I was 9 or 10 when I started with the YMCA and I was competing in the 800 and 1500 runs, so I was allowed one more event,” Shaffer said. “I thought the javelin looked really cool and I wanted to try it, but getting good at it was a lot harder than I thought it would be.”

He had an aptitude for the sport and a willingness to work at it several times a week. He progressed steadily during his days at Salisbury Academy, and then Salisbury High.

The awards and the trophies have piled up. He is now a three-time AAU state champion.

He was a champion in the event in the 2022 State Games.

He placed sixth in the Adidas Outdoor Nationals last summer.

His PR is almost 158 feet, which is very good, but he figures to keep moving past that number as he starts throwing more this spring.

Shaffer’s javelin coach has ties to Charlotte. That’s how the 49ers found out about him.

He’s an excellent student, especially in science and math, so that made him recruitable.

The school could be a perfect fit for Shaffer on and off the field.

“The goal is to become an engineer and Charlotte is one of the best engineering schools in the state,”  Shaffer said. “They’ve also got a really strong track and field program. It’s an exciting opportunity.”