High school football: Wells turned in a season for the ages 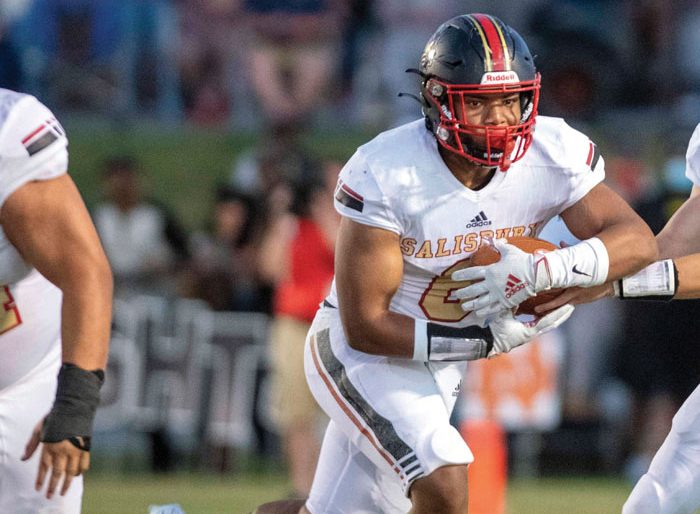 SALISBURY — Monumental football seasons were turned in by multiple athletes at West Rowan and North Rowan, and Salisbury’s ruthlessly efficient quarterback Mike Geter came close to duplicating the breakout season that made him the 2021 Rowan County Offensive Player of the Year.

But Salisbury senior running back JyMikaah Wells made the Post’s choice for 2022 Rowan County Offensive Player of the Year an easy one. Landslide. Unanimous.

Even opposing coaches agreed it was Wells — and then everyone else. Wells didn’t just have a super season, he had one of the all-time seasons, stamping his name all over the school and county record books.

Despite basically missing two full games with an injury, the Central Carolina Conference Offensive Player of the Year rushed for 2,035 yards (that ranks seventh in county history) and scored 35 touchdowns.

That injury, as it turned out, was more serious than anyone realized at the time, so what Wells was able to accomplish — on one leg — is mind-boggling.

“He had a tremendous senior season,” said head coach Clayton Trivett, who guided Salisbury to an 11-2 record in his debut. “He was a workhorse, he wanted the ball and with a young offensive line and young receivers we made a decision to put the ball in his hands and see how far we could go. His confidence grew as the season went on. He had stamina and determination and even after a lot of carries, he would be like, ‘Give it to me again. I’ve got this.’ ”

Wells has been exceptional since his freshman season when he was the No. 2 back for a state runner-up team.

When Salisbury won a state championship Wells’ sophomore year, he barreled for more than 1,400 yards. Then he added more than 1,200 yards as a junior.

To understand the Wells that defenses were trying to contain, you have to start with his middle school days at Knox, when he played in a national All-America game. There was a day when Romar Morris, a Salisbury legend, was back home from the Canadian Football League, working out at his old high school, and he noticed a kid intently watching him from the bleachers.

Morris didn’t know Wells yet, but he did know Wells’ mother, Lisa Scott. Eventually Morris would teach Wells pro and college drills and would let him join his workouts. The seeds for a deep friendship were planted.

“I remember the first time I saw him,” Morris said. “I couldn’t believe how massive JyMikaah was for a middle school kid. He had talent. He was strong. It wasn’t hard to see he could be special.”

Jump ahead to the summer between Wells’ junior and senior years. Morris has retired from football, but he’s working hard through the Next Generation Defenders organization to inspire youngsters to be the best athletes and people they can be.

“Emptying the tank,” Morris said. “Giving the kids everything I know.”

Morris can’t pass on his incredible speed to his pupils, but he can pass on his knowledge and his passion for sports. Morris works with all of Salisbury High’s athletes on strength and agility training, but he conducts extra summer sessions for Wells. He pushes Wells harder than he’s ever pushed anyone.

“I remember one day last summer it was 101 degrees out there,” Wells said. “Romar was pushing me through all these drills in terrible heat. But I wasn’t going to quit.”

They had long talks about football and about life. They set goals for Wells’ senior season. Morris held the Salisbury record for career touchdowns (58) and he had set the Hornets’ single-season record for rushing yards (1,780) when Salisbury played 16 games and won a state championship in 2010. He told Wells he could break all of his records. He told Wells that was the best possible payoff for a mentor — to see a pupil surpass him.

“I told JyMikaah he could rush for 2,000 yards,” Morris said. “Seriously, we talked about 2,000 rushing yards, something no one had ever done at Salisbury High. We talked about him being more productive and we talked him putting the ball in the end zone more often. I told him everyone knew he could run over people, but I wanted to him have a goal of scoring touchdowns without anyone ever laying a hand on him. I told him to save his body the hits when he could. Those harder hits are coming for him in college, and I want him to be ready for it.”

Wells trimmed down during those intense workouts. He dropped from 230 to a more sculpted 215 without losing any power. There were noticeable gains in acceleration and speed.

Just as Morris wanted, there would be 2022 runs when he blew through a hole and found the end zone without anyone ever touching him.

“I did feel different as a senior,” Wells said. “Lighter on my feet, quicker. More elusive. Romar convinced me not to try to truck the defense all the time.”

Salisbury got smashed on opening night by West Rowan. The Falcons were more ready than the Hornets in August and they were fired up. Wells was the bright spot for the Hornets — 205 rushing yards and his first TD of the season.

Wells got 21 carries on the road as the Hornets got their first win at Green Level. He got 173 yards, scored a touchdown.

Potential disaster struck in Week 3 against East Rowan. Wells went down with an ankle injury on his second carry. He had 24 yards at that point. His replacement, Jamal Rule, had a field day against the Mustangs, so there’s no telling what Wells might have done. Then, with Wells still hobbled, Rule and Geter ran wild again the next week against South Rowan.

Thomasville was next, the start of league play and one of the toughest opponents the Hornets would face all season. Wells was determined to be out there against the Bulldogs — and he was. He carried 28 times for 184 yards to lead a Salisbury victory that eventually would mean another CCC championship.

The entire CCC season became a non-stop feast for Wells. Over the next five weeks, he would top 200 rushing yards three times and would score 25 touchdowns. He scored a school-record six touchdowns against West Davidson and six more against North Rowan.

In the second round of the playoffs against Pine Lake Prep, Wells produced a five-TD night.

Salisbury fought to the end in the third round game against Burns in a 24-20 loss that ended the season. Wells surpassed 2,000 rushing yards, making good on Morris’ lofty prediction, despite the two missed games.

“The things we worked on in the summer, I could see all those things showing up for him on the field,” Morris said. “There’s no better feeling. I’m super-proud of JyMikaah’s season.”

There’s a rest of the story.

When Wells began this basketball season still favoring his injured leg, his mother decided to take him to an orthopedist.

The doctor was shocked. X-rays showed Wells had suffered a fractured ankle as well as a fractured tibia (the long bone in the lower leg) in that East Rowan game.

But he wanted to help his team, wanted to win and wanted to earn a college scholarship. He wanted to accomplish all the things he and Morris had worked for and talked about.

So he kept going.

“It hurt some, but I thought it was just shin splints,”Wells said. ” The doctor couldn’t believe I played most of a season with those injuries, but I just did it because I needed to do it. The injuries are healing. My teammates have started calling me ‘Wolverine.'”

Wolverine is the Marvel Comics character whose mutant body naturally heals itself no matter how frightfully he has been wounded.

Scholarship offers for Wells have trickled in, all from Division II schools, although he certainly looks like a Division I player.

Wherever he winds up, he’ll have the advantage of already having experienced college-level workouts. College football is a business. Not every player wants to work that hard.

“I’ll tell you this,” Morris said. “Wherever he goes, JyMikaah is going to light it up. And with the transfer portal being what it is, those schools that are sleeping on him now are going to be knocking on his door.”