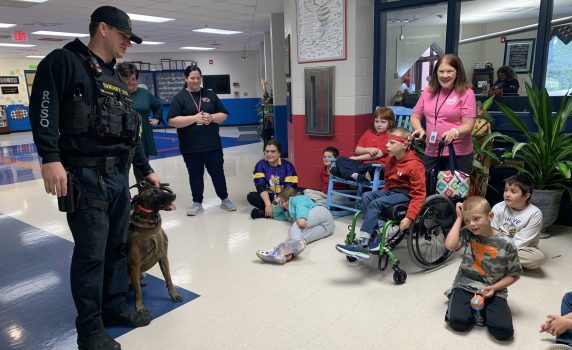 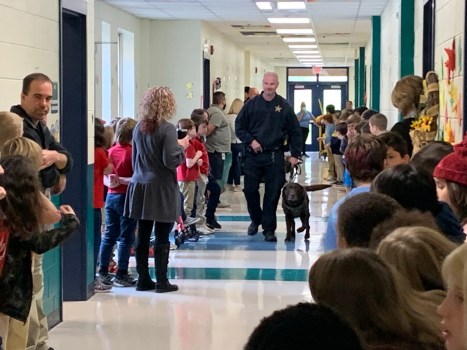 Deputy and K-9 handler for the Rowan County Sheriff's Deputy Patrick Michael demonstrates how he handles his K-9 Rex during a recent visit to Shive Elementary. - Submitted 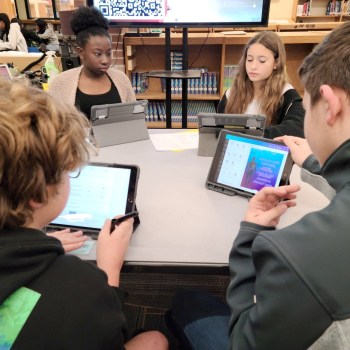 Seventh graders at Southeast Middle School research a disease during a capstone project. 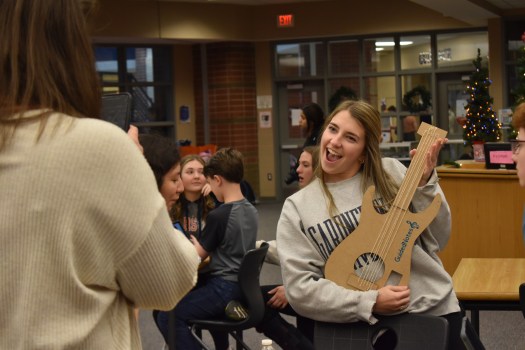 Students from Carson High, Southeast Middle and China Grove Middle got to have a little fun with tissue boxes as they learned about ways to deal with stress during the holidays at a recent event. - Submitted 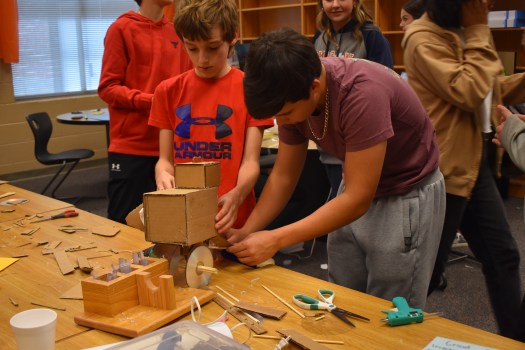 Students from mulitple China Grove schools worked in teams during a fun de-stress event where the reimagined uses for a tissue box. - Submitted 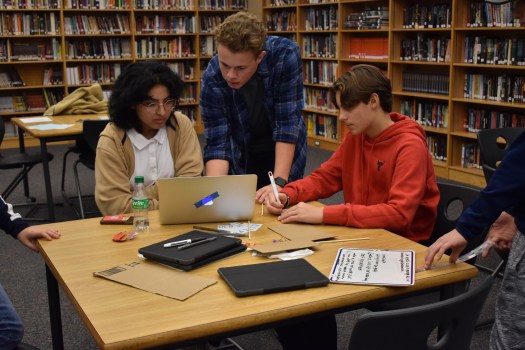 Students from Carson High, Southeast Middle and China Grove Middle work together during a de-stress event designed to address mental health around the holidays. - Submitted. 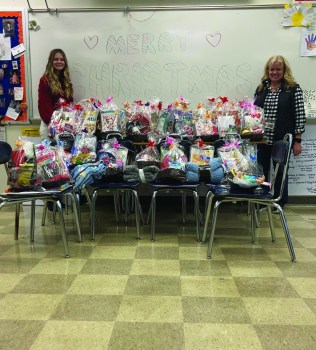 Bree Whittington, President of the National Honor Society, and Melissa Hager, Club Advisor. The National Honor Society at Jesse C. Carson High School chose to spread Christmas cheer this year by creating holiday baskets for the residents of Trinity Oaks Nursing Home. The students were given residents wish lists, and the students went shopping for them and put together baskets and gift bags for over 60 residents. submitted photo

ROCKWELL – Students at Shive Elementary received a special visit from the Rowan County Sheriff’s Office at the conclusion of the Coins for Canines campaign, which coincided with Red Ribbon Week.

Throughout the week leading up to Nov. 16, students dropped coins into buckets that corresponded with their grades. At the end of the week, the first grade class came out on top, with the second grade not far behind. Five K-9 units came out and met with the kids, who raised more than $750 to be donated to the sheriff’s office.

The students researched a disease and applied their learning of human body systems during the project. They also create a digital infographic to teach others.

“This is actually really fun,” seventh grader Jaden Banks said. “Sometimes I don’t like projects, but this one was really good.”

In English and Language Arts, the students learn to synthesize information from multiple sources while using non-fiction texts to answer a question and community using appropriate media, including visual media.

As for science, the students explore the human body systems and how they interact.

Teams blended students from different schools, with the high schoolers taking the helm. They were encouraged to think outside the box and brainstorm alternative uses for an average tissue box.

Next, the students dreamed up a character with stress or mental health challenges before creating a product to help solve the character’s problem.

The final products varied and included:

“It was a great way to build teamwork skills and give trust in people,” said Valerie Jordan, a junior at Carson High.

China Grove seventh grader Easton Reynolds said, “It was cool to learn how to sew because I never knew how to sew before now.”

After teams completed their prototype, they presented their research and finished product to a panel of judges from the community.

The students were given residents’ wish lists, and the students went shopping for them. Then, they put together baskets and gift bags for over 60 residents.