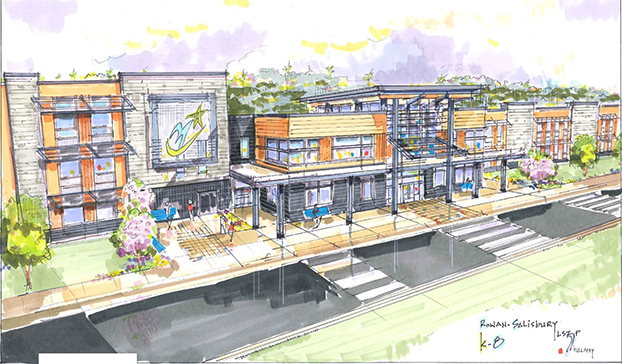 A conceptual drawing of the Knox-Overton K-8 school that's proposed to be built between the two facilities in Salisbury. and the firm LS3P.

When the Rowan-Salisbury School Board sought estimates for building a new school to replace Knox Middle and Overton Elementary, the original quote was for about $55 million. The project is now estimated to cost $90 million.

During the regularly-scheduled school board meeting at central office on Monday, representatives from the design and construction team presented the more expensive picture.

“Costs are difficult to control these days with the environment that we are in,” said Daniel Sykes, a senior architect at LS3P Associates LTD, the design firm contracted for the project. The new school will combine students from both former campuses into a kindergarten thru eighth grade building.

The project’s original estimate came in 2020, but the funding was frozen by the Rowan County Board of Commissioners in the early days of the COVID-19 pandemic, citing economic uncertainty. The project began again when funding was unfrozen in mid-2021.

According to the representatives, in June 2021, total project costs were $55 million. By January, the estimate had ballooned to $71 million. Then, in September, the design group provided an estimated cost range, with a high end of $90 million.

The presentation on Monday confirmed that high range number, with $76 million strictly for brick and mortar, but an additional $15 million would be needed for soft costs, such as desks, technology and other internal elements of a school.

The board was not officially voting on anything Monday.

“The only votes we have made as a board is for what contractors are doing right now,” RSS Chief Operations Officer W. Anthony Vann said. “The vote was to approve these two organizations and their contracts to do that work. We were asked to move forward to get us to a point where we could get a guaranteed maximum price. They are not quite there, but one could be coming after the first of the year.”

The ever-changing mark drew the ire of the school board chairman Dean Hunter.

“It’s hard not to be completely sarcastic, fictitious and sinful when we have these conversations, to be quite honest,” Hunter said. “It’s absurd. We are over 35% over two years ago, increased costs.

“We need to come to the place where we discuss what we are going to do. Now we gotta go back to the commissioners and say we need at least $21 million, and we might need a few more if the kids are going to have desks.”

Fellow board member Sabrina Harris added, “My concern is just the commissioners and them being willing to help us with a big project.”

“I think as a board, we need some time among ourselves to discuss some numbers and what we can possibly do to put ourselves in a good position before we actually have that conversation with the commissioners,” Harris said. “There is no doubt that this is a project that is necessary and needed, especially when you start thinking about where we want to be as a district five years from now.”

Harris wasn’t the only board member looking ahead.

“What is the price going to be in a year and a half from now,” RSS Board member Brian Hightower said. “Where are we going to be with the South Rowan area growing the way that it is in two or three years or five years? What are we going to do with South Rowan because that will be an exploding area? I can’t wait to see what we are going to pay for a high school down there.”

Where the final estimate ends up remains unclear, but the next time Rowan-Salisbury Schools Board gathers will be for a work session at central office on Jan. 9, 2023, at 4 p.m.