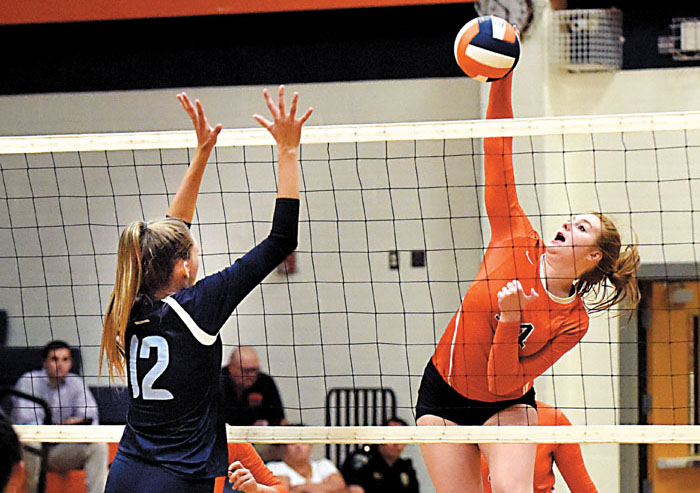 Carson's Lindsay Elmore returns the ball as West's Braelyn Faust defends during a match in 2017.. photo by Wayne Hinshaw, for the Salisbury Post

SALISBURY — “I’ll be home for Christmas” carries a deeper meaning now for Lindsay Elmore, who is scheduled to return home today for a holiday break.

Elmore, a Carson and Queens University graduate, will have tales to tell.

She’s been studying and extending a long and successful volleyball career in Durham, England, 4,000 or so miles from where she first learned the game from coaches such as Jan Dowling, Trish Hester, and, of course, Kelan Rogers.

“When I started playing volleyball, I never dreamed it would lead to an opportunity to play overseas,” said Elmore, who is a 6-foot-1 middle blocker.

Join the volleyball team — and see the world.

The Elmores are an athletic and tall family. Gary Elmore, Lindsay’s father, was an assistant men’s basketball coach at Campbell in the 1990s and was on the bench for the Camels’ 1992 loss in Greensboro to a Duke squad that went on to win the national championship. That was a first-round blowout — Campbell didn’t have a great matchup for Christian Laettner — but you never forget being part of March Madness.

When the Elmores relocated to Rowan County years ago, Lindsay’s older sister, Hannah, who was four years older, got interested in volleyball, so Lindsay also had to try it. The head start Lindsay got would eventually pay off.

Hannah stood out in soccer for Carson, but on the volleyball court, she became “The Hammer,” an important piece of Rogers’ legendary teams that won two Western Regionals and finished as 3A state runner-up in 2012 and 2013. Hannah moved on to Brevard for more volleyball, shined on the court and off. She earned a mathematics degree.

It was assumed Lindsay would be awesome immediately for the Cougars because she was Hannah’s sister. But her freshman year was mostly a learning process. She made a jump to dominant player as a sophomore. She was all-county and all-conference three straight seasons and her work for the Carolina Union Volleyball Club got her noticed by several college programs. She signed with Queens University.

She played on Queens’ last four Division II teams. The Royals moved up to Division I this fall.

The games at Catawba always were a treat for the Elmore family, but it was a game against Anderson her freshman year that Elmore remembers most fondly from her college career.

“They had a good team and we didn’t have a star player, but we played together really well that game and beat them in the semifinals of the South Atlantic Conference Tournament,” Elmore said. “It was all very cool, and I think that match was a turning point for me at Queens.”

Elmore led Queens in blocks as a sophomore. Her junior season was shortened by COVID, but she came back for a senior season that was her best.

She led the Royals with 241 kills, 19 of them in the match at Catawba, and racked up a team-high 40 aces. She earned some major accolades. She was third team All-SAC and was named second team All-State by the North Carolina Collegiate Sports Information Association.

“I was a senior on a very young team,” Elmore said. “One of the best things was having freshman KK Dowling as a teammate. KK’s mother (Jan) was my first volleyball coach, so things came full circle for me.”

Elmore thought the 2021 season at Queens would be her volleyball swan song.

She’d played the game for 13 years, and she loved it, but she was graduating with a degree in psychology and was ready to move on.

Elmore had played four seasons for Queens, but she still had a year of playing eligibility because of the universal redshirt for the COVID season.

An unexpected door opened when a recruiter contacted her via social media.

Would she be interested in playing university volleyball in England while she worked on a postgraduate degree?

Well, sure, she would.

“You’re skeptical at first, but I checked into it and it was real,” Elmore said. “It was an amazing opportunity to play volleyball for Durham University. It’s one of the best volleyball programs in England as well as one of the top academic schools. And I do love to travel.”

A couple of highlight videos were sent to Durham. One visa and one plane ticket later, and Elmore hugged her family and flew to England — by way of Ireland — in late September.

She’s done well as a player in England — she’s part of a high-powered team with a number of Americans — but most of her memories are going to come from her off-the-court experiences.

For instance, she introduced her teammates to her grandmother’s secret recipe for chicken noodles at Thanksgiving. They were a hit.

Team Durham plays in a tournament in Croatia in July, and Elmore hopes to be part of that experience. She plans to return home for good not long after that.

Her studies are in the field of developmental psychopathology, which is the study of the development of psychological disorders such as schizophrenia and depression.

Her minor at Queens was in chemistry, so she may end up in the field of forensic psychology, which applies a number of psychology techniques to the legal arena.

She’s got a lot of reading and studying and an internship and hopefully a doctorate in front of her before she makes a final career decision, but this last fling with volleyball has brought her peace and hugs and a pleasant farewell to a game that has spanned the majority of her life.

“I wanted my last time with volleyball to be a great time,” Elmore said. “Playing the game for fun and with no pressure at all.”