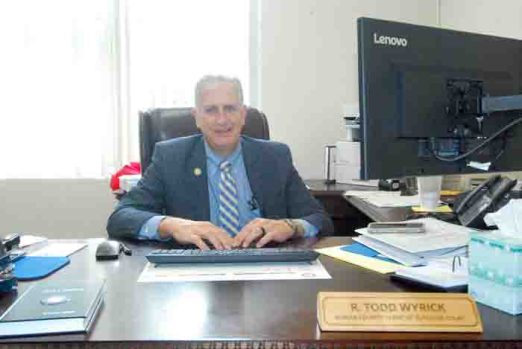 Todd Wyrick is the new clerk of Superior Court after being sworn in Monday. Charlie Drape/Salisbury Post 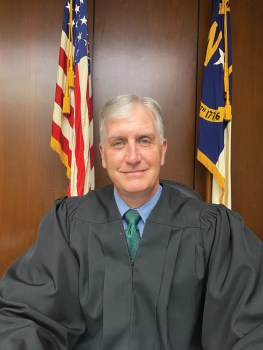 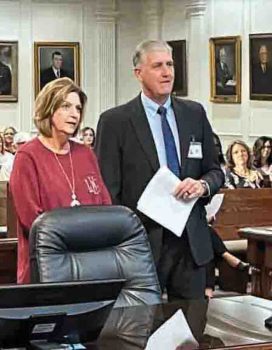 Clerk of Superior Court Todd Wyrick, with his wife Laurie, prepares to be sworn in. Submitted photo

SALISBURY — Todd Wyrick said he has finally found the job that was meant for him.

He was sworn in as the new Rowan County clerk of Superior Court on last week. He oversees all 41 clerks who work in the court’s office. They are responsible for all court record keeping and are responsible for the money that comes in and is paid out of the court system.

Born and raised in Salisbury, Wyrick graduated from East Rowan High School before getting a degree at Pfeiffer University. During his sophomore year at Pfeiffer, he joined the North Carolina Air National Guard, which was a job he considered as his full-time career.

But that was before he got appointed to the Rowan County Magistrate’s Office, where Wyrick worked as a magistrate for the next 35 years, issuing arrest and search warrants, setting bail, committing offenders to jail and issuing subpoenas and civil warrants. Magistrates also hold small claims court and traffic court. He later became Rowan County’s first chief magistrate.

Around five years ago, Wyrick and his wife, Laurie, started to talk about campaigning for clerk of Superior Court, an elected position with a four-year term. He finally got the opportunity when former clerk Jeff Barger decided he was going to retire at the end of 2022. Wyrick started his campaign in 2020, going to as many events as he could find all over Rowan County. He took to social media to get his name out and said he went to places in the county he’d never been to before even though he has lived here his entire life.

“We ran everywhere and all over the place. It was exciting, but it was tiring,” Wyrick said. “I had never experienced anything like that.”

Another big reason Wyrick decided to try it was when he talked about it with his mother, Kerry. He said when she heard he might try to run for clerk her eyes got bright and she got really excited. But six months later, Kerry passed away, never getting the chance to see her son elected.

“I guess I always had it in my mind that I kind of did this for her,” Wyrick said. “She would have been extremely proud.”

Wyrick defeted Rebecca Saleeby in the Republican primary in May and then ran unopposed in the November election. When they found out he won, his wife said they couldn’t have been happier.

“I was just extremely proud. He is a wonderful leader,” Laurie said. “We were extremely happy when the campaigning part was over in May.”

Now that he is officially in office, Wyrick is focused on a few goals. The main one is setting up a new computer system called Odyssey that is being used by the state to hold all the files and records of the court system. That means getting employees trained in how to use it.

Another goal is to get more office space for the clerk’s office and to hire more clerks.

He also has been going to each division and learning jobs that he has never done, so that he can help out when he is needed.

“My goal over the next six months is to work every position in the clerk’s office. Sit one day at each position and just get a feel for it. By the end of the year I want to know how to fill in for anybody,” Wyrick said. “I don’t want to sit here back in this office. I don’t want to do it. I’m a hands-on guy.”

Wyrick said he hopes to be the clerk of Superior Court for the next eight to 12 years, depending on if the voters will re-elect him. He said he still feels young and is ready to tackle it head-on.

“Honestly, being here a week I can already tell this is for me. This is the job that I was to meant to have,” Wyrick said.