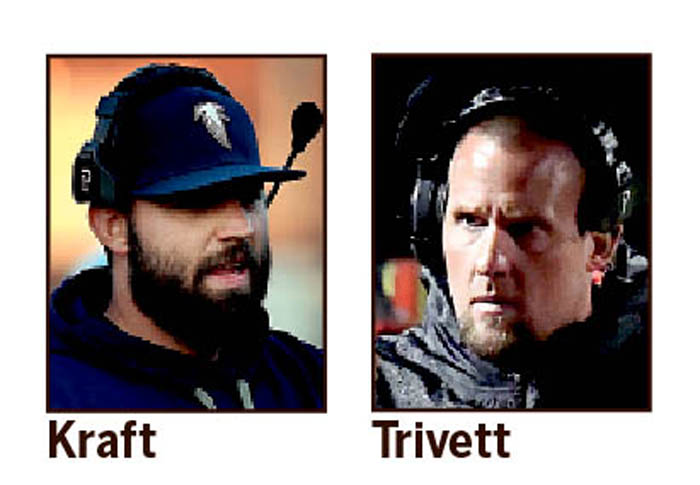 SALISBURY — The Post’s Rowan County Football Coach of the Year Award had just about become the Brian Hinson Award.

Hinson had won three in a row (one shared) and four out of five for his work at the helm of the Salisbury Hornets.

When he stepped down back in April it opened the door for new blood.

“Brian is a tough act to follow,’” Trivett said. “But we had great kids and a great staff. That helped tremendously.”

The argument for Kraft as coach of the year was simple. West’s 9-3 record included the first 5-0 sweep of Rowan County teams, including a 31-7 mauling of Salisbury on opening night.

“We went into that Salisbury game feeling disrespected and with a chip on our shoulder and our kids played with tremendous energy,” Kraft said. “But it’s hard to maintain that level of intensity, and I think we spent a good part of the season chasing that energy and trying to get it back. I think it was the second half of the East Rowan game (50-0 on Oct. 28) when we finally put it all together again and had the offense and defense both playing great football at the same time.”

The coach of the year argument for Trivett was different, but equally strong.

While West won the mythical county championship and all the bragging rights that come with that feat, the Falcons didn’t win their conference. They lost the South Piedmont Conference showdown game to Northwest Cabarrus.

Salisbury (11-2) won its second straight Central Carolina Conference championship and the tangible hardware that goes in the trophy case.

Salisbury enjoyed an 11-game winning streak and went unbeaten in September and October.

And while the Falcons bowed out of the playoffs in a wild, second-round shootout at West Henderson, the Hornets went down to the wire before losing a third-round dogfight at Burns.

So the Hornets played a week longer in November. The final MaxPreps rankings had the Hornets ranked 60th in the state and West Rowan 94th.

Coaches have a lot on their plates.

They have the primary assignment of helping boys become men.

They have to lead. They have to construct a team of assistants as well as the team that takes the field.

They have to evaluate talent. They have to figure out who should start and who should not and they have to place individuals in positions where they can maximize team success. Sometimes they have to make decisions about playing guys both ways. Trivett used two of his stars — Mike Geter and Deuce Walker — extensively on both sides of the ball.

Coaches have to teach the game.

During a game, coaches have to call plays, make substitutions, make instant decisions and manage the clock.

Last, but not least, a head coach has to deal with parents and recruiters and media. The percentage of the population that can handle all those tasks effectively is pretty low.

While it was generally assumed that Trivett had it made when he was named head coach of the Hornets, there was more work to do than people realized.

Yes, the Hornets still had Geter, Walker and JyMikkah Wells returning from a dynamic team that had broken records, but there were lots of holes besides the enormous one left by phenom linebacker Jalon Walker. The Hornets graduated a large football class.

“We had a small senior class this year and we had to replace eight defensive starters and five offensive starters,” Trivett said. “We had a lot of guys new to varsity football, and that first game against West Rowan was eye-opening for a lot of them.”

Trivett pointed at the Green Level game in Week 2 as the pivotal one in the season. Long road trip to Cary to take on an opponent no one knew anything about, but the Hornets couldn’t afford to fall to 0-2.

“Staff and players just got back to work after the West game, and we knew we needed a much better performance in Week 2,” Trivett said. “We did play better and we got a win we really needed. After that night, I felt like we were on our way.”

By mid-September, the Hornets had figured out who they were, and they would ride the powerful legs of JyMikkah Wells as far as he could carry them. Wells began piling up extraordinary rushing yardage and touchdown totals. He would become Salisbury’s first 2,000-yard rusher and would score 34 rushing TDs.

“That was a decision based on us having a young offensive line and a lot of young receivers,” Trivett said. “It worked out. The offensive line got better every week, and JyMikaah had a fantastic season.”

There were some signature wins during the regular season. The Hornets went on the road and smacked a Thomasville team that finished 11-2. Salisbury destroyed an East Davidson team that beat North Rowan. Salisbury put 53 on the scoreboard against the Cavaliers.

Salisbury won two playoff games, including a dominant victory in Round 2 against a Pine Lake Prep team that was 10-1 when it cruised into Ludwig Stadium.

The season ended the next Friday in a 24-20 loss to Burns. The Hornets were substantial underdogs in that one, but it went down to the final minute.

“Burns was ranked No. 1 in the state by a lot of people,” Trivett said. “That game we played at Burns — I couldn’t have been more proud of our staff or our players. We played a really good football game.”

It always will be a memorable season for Trivett as it began with the birth of a daughter the day before official practice started.

There was a whirlwind week of looking after his young son and being at the hospital with his wife, Lauren, who kept telling him she was fine and that he needed to get to practice.

Trivett’s new daughter was on mom’s lap for her first Hornet game when she was only a few weeks old.

“My wife, she’s all about football,” Trivett said with a laugh.

After one season, Trivett owns more career wins than 33 men who have been head football coaches in Rowan County.

Kraft, the son of former West head baseball coach Skip Kraft, and his staff entered the summer of 2022 with uncertainty. They were coming off a 7-4 season and they had graduated record-setting QB Noah Loeblein, the top two running backs and the top two receivers.

“And (huge offensive lineman) Josh Noble, who was the biggest loss of all,” Kraft said. “Josh could’ve played for anybody.”

But West still had a host of experienced linemen. Sophomore Evan Kennedy was ready to emerge as a star. Landon Jacobs, moving over from defense, would shine as a running back. New QB Josh Graham basically would duplicate Loeblein’s huge passing numbers.

And Adrian Stockton would come almost out of nowhere to lead the county in receiving. Stockton delivered such an incredible season that Kraft vows he’s going to name one of his future offspring after him.

“It all started with the grinding we did in the summer and we could see guys working, buying in, getting better,” Kraft said. “We knew our start to the season would be critical. We really needed a fast start. We’re looking at Salisbury, Davie and Mooresville right out of the gate, and a lot of people thought we’d be 0-3.”

The Falcons weren’t. They went 3-1 at the outset. All that summer sweat paid off with a smashing win against Salisbury on opening night. They rallied to beat Davie in one of the games of the year. They lost to Mooresville, but there was no panic. The Falcons knew they had another good team. And then they outscored North Rowan thanks to an incredible game by Kennedy,

In mid-September, the Falcons were nearly ambushed by Carson in a South Piedmont Conference game. Somehow, West won 34-31 when a loss would’ve changed the trajectory of the season.

An inspired Carson team may have played its best game of the year. West pulled it out on a late Juan Arteaga field goal.

“Didn’t play well, but on a night when the Falcons weren’t very good, they still found a way,” Kraft said. “If we lose to Carson, we don’t have the season we wound up having.”

West’s offense slowed down some in the loss to Northwest Cabarrus that decided the SPC championship and West had to battle to survive Concord 14-7 with a defense that bent like a horseshoe,but only broke once.

“That was a game,” Kraft said. “Concord was probably the best three-win team I’ve ever seen and they executed their keep-away game plan perfectly. But again, we found a way.”

The Falcons lost Kennedy to a growth plate injury late in the year, but Stockton stepped up bigger and bigger each week. West located its offensive mojo again in late October.

The Falcons crushed Franklin 35-7 in the first round of the 3A playoffs in what may have been their most complete team effort since the Salisbury game.

The second-round 56-42 loss at West Henderson was one for the books. West had never scored so many points in a playoff loss.

“Kind of made me sick when we looked at the stat sheet,” Kraft said. “We had 570 yards of offense and that’s going to win nine out of 10.”

It was a season-ender, but what a season it was. The Falcons exceeded everyone’s expectations — except their own.

“The only real disappointment was the conference championship eluding us again.”Kraft said. “And the SPC gets tougher with Robinson coming into it for 2023.”

Still, the bottom line for 2022 was the Falcons proved they’re still the Falcons. They’re still a program to be reckoned with year in and year out, a team that will pound you in the trenches because their guys sacrifice in the weight room every off-season.

“Being head coach of West Rowan football is such an awesome job to have,” Kraft said. “Great staff, great kids, great community support. What an honor it is to get to lead these guys.”