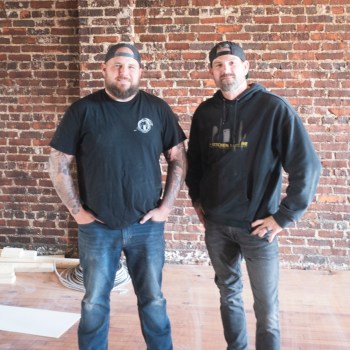 CHINA GROVE — Cultivating a popular meeting spot was something Jason Overcash dreamed about when he opened Grove Cartel Brewing Co., but there was always a second layer to his plan — a quality restaurant.

“My goal originally was a high-end steakhouse, something China Grove lacks,” Overcash said. “If my wife and I go out to eat, we have to go to Mooresville or Salisbury.”

Although it might not have been his original plan, Overcash announced recently that the space above the brewery would soon house a restaurant he could be proud of, a second location for Meadow’s Italiano of Mooresville. The brewer indicated that the move was a best-of-both-worlds scenario because it would satisfy his goal of a nice restaurant in the same space as the beerhouse.

Since he had already laid the groundwork for his restaurant in the space, Overcash pointed out that it would be easy for Meadow’s to set up shop.

“The kitchen is pretty much exactly the same (as our original plan),” Overcash said. “We added a few things here to fit their concept.”

The restaurant partnership resulted from a blossoming friendship between Overcash and the chef David Cavalier.

“David and I became buddies and started working together,” Overcash said. “They come out here every Thursday with their food truck. After talking with him and becoming friends, we decided to join forces.”

Meadow’s Italiano is a joint venture between Cavalier and owner Jason Poluka. The former expects the move to help build the partnership’s brand.

“We were kind of in the middle of nowhere at the time,” Cavalier said. “I think a lot of people kind of doubted what we were doing, but it turned out that that community is a great community and in desperate need of something, somewhere to go.”

Cavalier described his current restaurant as more of a “deli-style restaurant” with a wood-burning stove that was great for takeout.

“I knew that wasn’t going to facilitate where we ultimately needed to go with the business,” Cavalier said.

Cavalier intends to keep the main pieces in place with some minor menu modifications.

“Mostly everything is going to be the same, we will have the same menu, but we are adding on some other menu items, like smash burgers and triple-fried duck-fat fries,” Cavalier said. “We will have fried Brussels sprouts and fried cheese curds. In a nutshell, we are going to have pizza, burgers, wings, fries, sandwiches, salads and housemade desserts.”

The second-floor space has a seating capacity of 90 patrons.

“That is our fire code,” Overcash said. “I think the actual seating we are putting in here is 75.”

Patrons can take their food upstairs and downstairs and be served on either level.

“You can walk downstairs and scan a QR code at the table and have it brought down to you,” Overcash said.

Overcash and Cavalier anticipate an opening toward the end of January next year but hinted at the possibility of a quicker turnaround.

“Things have progressed faster than we thought, so we may make it earlier,” Overcash said. “Some final touches are going in. Tile is getting grouted, and quartz is getting set on countertops. Our equipment is all here except for our wood-fired grill, which is coming from Italy. It will be built in place. They are saying middle to late December (for the grill).”

As he attempts to maintain a commitment to the community, Overcash is keeping the expansion project in-house.

“We are really invested in the community here,” Overcash said. “That is our whole thing. We try to use everybody around us. All the people working here are local. Everybody that built this place has been local. There has not been an outside company that came in from outside of Rowan County to do any work here.”

More importantly, as Overcash sees it, the restaurant will give China Grove customers another option before seeking food elsewhere.

“It keeps the affordability in China Grove so that people from China Grove don’t have to leave to get good food,” Overcash. “This menu will improve a lot of things for people around here. You can bring family and friends and afford it and not have to spend $50 for a steakhouse.”

Overcash hinted that he’s not giving up on his steakhouse vision just yet.

“We may explore something different in the future at another location,” Overcash said.

For now, he’s keeping his mind on the current mission, where the sky appears to be the limit.

“We are permitted for rooftop access, so that is our next goal,” Overcash said.

Grove Cartel Brewing Co. is located at 211 North Main St. in China Grove. It is open 3-9 p.m. on Wednesdays and Thursdays and noon-10 p.m. on Fridays and Saturdays.