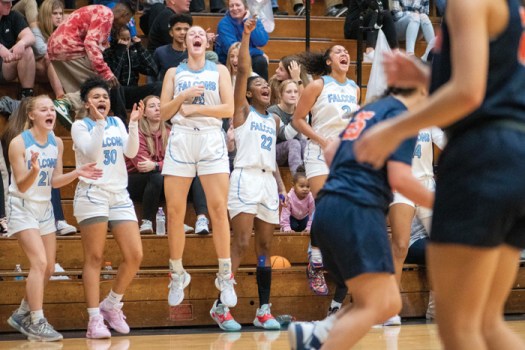 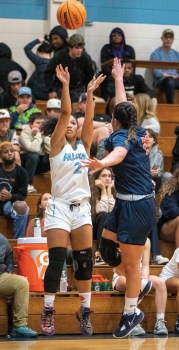 MOUNT ULLA — West Rowan’s girls began the season with plenty of hype, but they may be even better than advertised.

It’s early, but if the Falcons stay healthy they can be 3A state championship contenders. They have size, depth and speed. They have everything it takes.

“We do have some talent,” West coach Ashley Poole said. “More important than talent, girls are accepting roles and working together. We’re playing very well for this early in the season.”

West watched Carson win a state title in 2021 and saw Salisbury get one last season. The Falcons have a chance to make a run of their own this season — and next.

West returned its top seven players from a second-place team and added transfer Jamecia Huntley, who was huge in Salisbury’s state-title run, as well as standout freshman guard Tiara Thompson.

A rebuilding Carson team, which played with seven in uniform, had no chance and got steamrolled in a South Piedmont Conference game on Friday. It was 17-0 after a quarter and 44-2 at halftime. The final was 73-13.

West emphatically ended a seven-game losing streak to the Cougars, including a 69-29 beating last season.

“We played West Rowan basketball,” Poole said. “We got out and ran, played good defense, scored in transition. It was one of our better rebounding games. That’s something we worked on after the North Rowan game.”

West (7-0, 2-0) has scored 70-plus five times and has allowed only two teams to top 40 points. Holding Carson to 13 was the stingiest defensive effort so far.

“We were just so out-matched,” Carson coach Brooke Stouder said. “West is really good, athletic, fast and skilled in every area.”

Makaylah Tenor led the onslaught for West with a season-high 17 points. Lauren Arnold scored right at her average with 14. Emma Clarke scored 11 and was in double figures for the fourth straight game.

Thompson, who has led the scoring for the Falcons twice, had nine, and De’Mya Phifer scored eight.

Huntley scored only four, but Poole said she’s doing everything she’s being asked to do. Scoring comes below defense and rebounding on her list of priorities.

Allie Martin was the only Cougar to make a field goal. She scored eight. Brooklyn McBride made four free throws, but the Cougars (1-5, 1-1) missed 12 of 18 free-throw opportunities.

“I thought we were tougher in the second half,” Stouder said. “This was another game of experience for our girls and experience is what we need most. I thought we fought hard. Now we have to move past it and continue to work to get better.”

THOMASVILLE — Salisbury’s girls were missing two starters, but it didn’t matter much on Friday.

The defending 2A champs smothered Thomasville 56-5 in the Central Carolina Conference opener for both teams.

Salisbury has a 32-game winning streak dating back to early last season.

The Hornets (5-0) got 21 points from Kyla Bryant, The senior has scored 20-plus in four of the Hornets’ five games. She boosted her career total to 1,256 points. She’s the leading active scorer in Rowan County by quite a bit.

With MaKayla Noble and Mary Morgan out, senior Icecis Nwafor doubled her usual scoring average with 16 points and five more girls chipped in some points.

Morgan sustained a high ankle sprain injury in Wednesday’s win over Albemarle. The Hornets hope to get the charge-taking senior back on the floor in a week or so, but high ankle sprains can be troublesome.

Noble hurt a knee and is scheduled for an MRI on Monday.  Noble is the team’s No. 2 scorer.

Thomasville fell to 0-3 and is averaging 15 points per game.

Brittany Ellis is back and was instrumental in North getting the win. She made two 3-pointers, scored eight and had six rebounds.

Bailee Goodlett did what she’s been doing all season. The junior guard put another 30 in the scorebook. She had six steals and got to the foul line often. Goodlett leads Rowan County scoring with 28 points per game.

Goodlett’s 12-point second quarter carried the Cavaliers to a 23-14 halftime lead, and then Ellis helped out in the third quarter.

Bloom Goodlett made a 3-pointer. Krisstyle Stockton had nine rebounds.

Chloee Stoner had six rebounds and made a number of key defensive plays in the fourth quarter. Stoner had a huge steal and game-changing block.

Bailee Goodlett and Ellis made clutch free throws down the stretch.

“Not the outcome we wanted, but we’re learning from our mistakes and losses and we played a pretty solid game,” South coach Alex Allen said. “Northwest is a good team, but we held our own. We saw how much potential we have if we can fit all the pieces together.”

Madilyn Cherry had a big game for the Raiders. She made three 3-pointers and scored 18, two short of her career high.

Kynlee Dextraze continues to earn a lot of trips to the foul line for the Raiders. She made six free throws and scored eight. Hannah Atwell added six points. Lexie Ritchie made an early 3-pointer to help the Raiders stay in it.

The Trojans (3-3, 1-1) bounced back after being pummeled by West Rowan. Mikaela Alberico scored 14 for the Trojans.

CONCORD — East Rowan’s girls breezed to a 50-14 win at Concord, which appears to be the South Piedmont Conference’s weakest squad.

Concord is 1-6 and 0-2 in the SPC. The Spiders routed Carolina International to open the season. 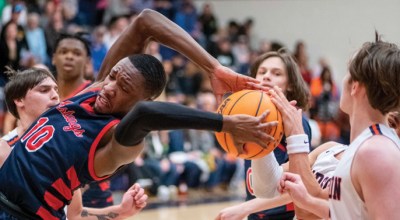