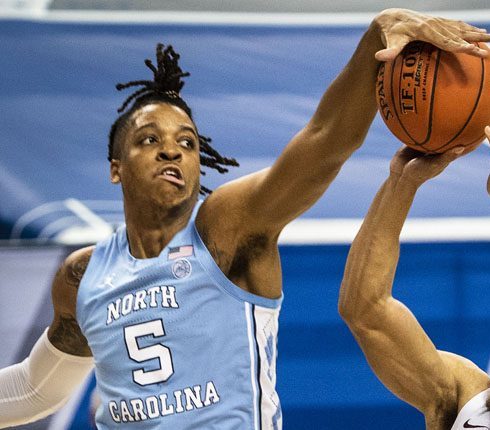 CHAPEL HILL —  Armando Bacot returned from a one-game absence to score 21 points and grab 13 rebounds, RJ Davis had 22 points and 10 rebounds and North Carolina snapped a four-game losing streak with a 75-59 win over Georgia Tech on Saturday.

Bacot reached double-digit rebounds for the 61st time, tying a school record held by Billy Cunningham, while recording his 54th double-double. Bacot missed the Tar Heels’ previous game with a right shoulder contusion. Davis’ double-double was the third of his career.

Pete Nance added 11 points and Caleb Love 10 in the first home game for UNC (6-4, 1-1 Atlantic Coast Conference) in nearly three weeks, winning in its first game since the preseason No. 1 team in The Associated Press Top 25 dropped from the rankings.

Miles Kelly and Jalon Moore scored 15 points each and Dallan Coleman added 13 for the Yellow Jackets (6-4, 0-1).

Davis and Bacot combined for 23 points in the first half when the Tar Heels went on a 16-2 run, scoring the final 11 points before the break. The lead remained in double figures in the second half, reaching a high of 20 late.

UNC made 18 of 24 free throws to 6 of 8 for Georgia Tech and the Tar Heels outrebounded the Yellow Jackets 43-22, including 12-1 on the offensive glass.

ATLANTA (AP) — Justice Hill scored the winning basket with 2 seconds left, KJ Williams had 35 points, and LSU defeated Wake Forest 72-70. After LSU called timeout with 15 seconds left in a tie game, Hill took the ball above the 3-point arc, made a spin move and got to the middle of the lane for the winning layup.

Hill’s bucket, only his second of the game, capped a come-from-behind LSU win in which Williams scored 23 second-half points, making 5-of-6 3-pointers. He made 7-of-9 3-pointers for the game and added nine rebounds. Tyree  had 26 points and six assists for Wake Forest (7-3).  Hayes had 13 points, six assists and five rebounds off the bench for LSU (8-1).

NC State took a 43-34 lead at the break, but Miami came out of intermission firing. Nijel Pack hit a 3-pointer 11 seconds into the second half and Wong did the same 30 seconds later. Miami finally pulled even with 5:22 left. The Hurricanes closed out the victory with a 6-1 run.

White added eight rebounds, five assists, and three steals for the Seahawks (8-3). Maleeck Harden-Hayes was 5 of 8 shooting (2 for 4 from distance) to add 14 points. Shykeim Phillips recorded 13 points and shot 5 of 8 from the field and 3 for 4 from the line. The Seahawks extended their winning streak to seven games.

Woolbright also contributed nine rebounds for the Catamounts (5-6). Russell Jones shot 5 for 8, including 4 for 7 from beyond the arc to add 14 points. Marlow Gilmore shot 5 of 8 from the field and 2 for 5 from the line to finish with 12 points, while adding 13 rebounds.

CHARLOTTE (AP) — Lu’Cye Patterson had 22 points, including the go-ahead basket with 42.2 seconds left in overtime, and Charlotte beat Detroit Mercy 82-80 on Saturday despite a history-making game for the Titans’ Antoine Davis.

Patterson also had seven rebounds and seven assists for the 49ers (8-2). Igor Milicic Jr. added 20 points while shooting 7 for 8, including 4 for 5 from beyond the arc, and also had 11 rebounds. Jackson Threadgill was 5-of-11 shooting to finish with 12 points.

The Titans (5-6) got 13 points and a career-high 18 rebounds from Gerald Liddell. Damezi Anderson added 14 points for Detroit Mercy.

Holmes added 12 rebounds and four blocks for the Flyers (6-5). Toumani Camara scored 13 points while shooting 6 of 7 from the field and added 11 rebounds. Koby Brea made three 3-pointers and finished with 11 points.

Dayton outscored UNC Asheville by eight points over the final half, while Holmes led the way with a team-high 12 second-half points.