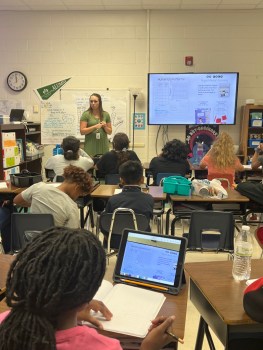 Sierra Ward is serving in her second year as an apprentice through the Accelerate Rowan Lab at Koontz Elementary School. - Submitted 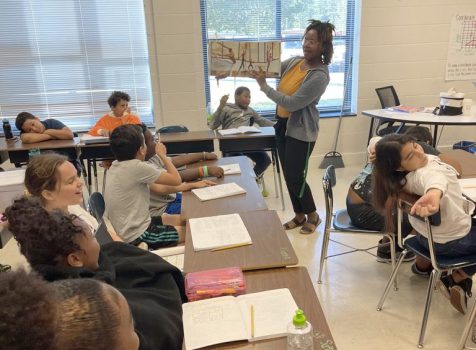 SALISBURY — Some Elizabeth Duncan Koontz Elementary School teachers are getting a crash course in education, but they say the benefits are immeasurable.

Through the Accelerate Rowan Lab School, aspiring educators get firsthand looks at the teaching profession through a pre-apprentice and apprenticeship program.

It is part of the program director Susan Heaggans’ vision to immerse individuals in a full-year, full-time paid apprenticeship with a gradual release model.

“The Lab School is a place where we are reimagining how we prepare teachers for the future of education,” Heaggans said.

Heaggans indicated that the accelerate lab model provides teachers an opportunity to gain the confidence and experience needed to maximize student learning.

“Apprentice teachers develop their craft early on through ongoing professional development, job-embedded, high-quality instructional and coaching support,” Heaggans said. “Students in this program immediately impact the diverse population at Koontz Elementary School and will be prepared to work at any elementary school in our district.”

Sierra Ward is a Dual Major Elementary Education and EC Apprentice Student at Catawba College and working in an apprenticeship in fifth grade with master teacher Cristal Wright.

Ward indicated that the relationship with Ward has had a positive impact.

“This Lab School has been an amazing way of preparing me as a future teacher and allowing me to see the importance of collaboration, classroom management, and planning,” Ward said. “One important thing I heard was even if you don’t think you’re doing well, you are. Sometimes teaching is chaotic, but we still need to remember to celebrate the small successes and realize how much we are impacting students.”

Ward was initially a pre-apprentice when she was a junior at Catawba.

“I got to work in a small group,” Ward said. “I worked in first and fifth grade to see each side of the spectrum of elementary education.”

Now in her second year, Ward is spending more time with students who qualify as exceptional needs, which is ultimately the field that Ward indicated she wants to be in.

“My first intent is to teach in the general education setting for the first couple of years and then get into working with exceptional children,” Ward said.

As many educators would likely report, it has not always been easy, but Ward is learning to deal with the challenges.

“One of the things that can get overwhelming is so many behaviors in the class,” Ward said. “Being able to sit calmly and reason with the students can be difficult, but it helps not to escalate the situation.”

From that development, she’s learned a thing or two about connecting with students.

“When you form relationships, you gain respect and trust among students,” Ward said. “That has helped more than I ever realized it would. Respect and trust are important, but you don’t realize how much until you are in that position.”

What they don’t teach you in school

Markeysha McLean is a student at Livingstone College, but she is serving as an apprentice for fifth grade students in Jena Horm’s class.

“Without the Lab School, I would not have gained the knowledge or experience given to me here at Koontz,” McLean said. “I have learned a lot of things they don’t teach in school. You can learn a lot in school, but you won’t learn much until you get in there.”

McLean indicated that her firsthand experience gained through the lab school is akin to the sink-or-swim approach.

“The only way to really learn is to throw yourself in the deep end and see what happens,” McLean said.

McLean is having a somewhat uncharted experience within the apprenticeship program.

“My situation is kind of unique because my master teacher had to take a small leave of absence,” McLean said. “So I have had to step up into the lead teacher role. The only way to learn to do it is just to do it.”

Still, what she is learning on the job has changed her perspective.

“It’s hard not to internalize things the kids say or do,” McLean said. “You don’t take it personally.
Right now in their life, when they feel, they react. It is your job not to react.”

While it’s caused her to doubt things at times, it’s also served as a significant reinforcement.

“There are moments where you question if this is what I should do,” McLean said. “Once you see those kids start to be happy when they see you, it sets you up for success. That makes the job what it is. It has down points, but they don’t compare to the good stuff.”