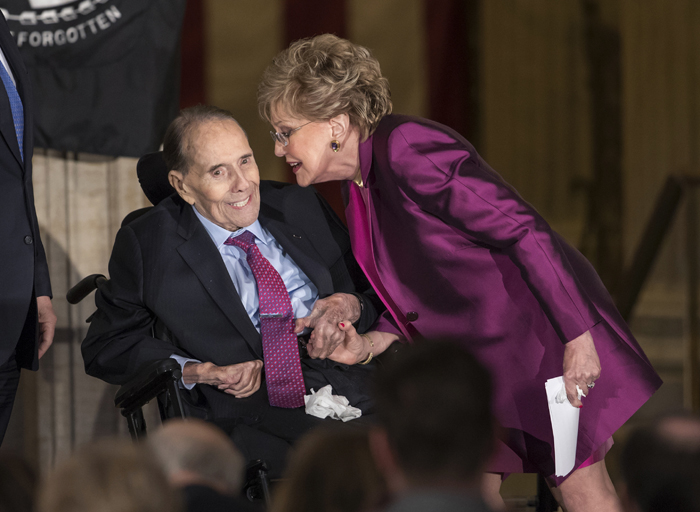 Bob Dolegets a kiss from his wife Elizabeth Dole as he is honored at the Capitol with a Congressional Gold Medal, in Washington in 2018. (AP File Photo/J. Scott Applewhite)

WASHINGTON, D.C.  — The Elizabeth Dole Foundation paid tribute to Senator Bob Dole on the anniversary of his passing on Dec. 5, 2021, by encouraging Americans to conduct an act of service or kindness in his name.

The celebrated public leader, widely recognized for his bipartisanship spirit, often said that he strived to help at least one person every day. The long-time leader in the Senate certainly exceeded his goal on most days, having led coalitions to pass the Americans with Disabilities Act, create the Food Stamp program, save Social Security, establish the Martin Luther King Jr. holiday, and drive forward legislation to enshrine fairness and opportunity for women.

“Sen. Bob Dole always said that the generosity and sense of service of Americans fueled his optimism for our nation’s future,” said Steve Schwab, CEO of the Elizabeth Dole Foundation, in a news release. “On this first anniversary of his passing, we planted the seed of this idea, which we hope will grow every year into an enduring tribute to one of the most compassionate and selfless leaders in our nation’s history.”

The inaugural Day of Service inspired good acts across the country, including preparing meals and bagging groceries for neighbors with life-challenging illnesses, cleaning trash from a beach, donating arts and crafts materials to an elementary school, delivering decorations to a hospital to brighten the holidays for families in the NICU, collecting clothing donations, participating in narcan training to be a local resource, and providing food and toiletries to an area food bank.

If you have an organization that would like to take part in next year’s Day of Service, contact info@elizabethdolefoundation.org.