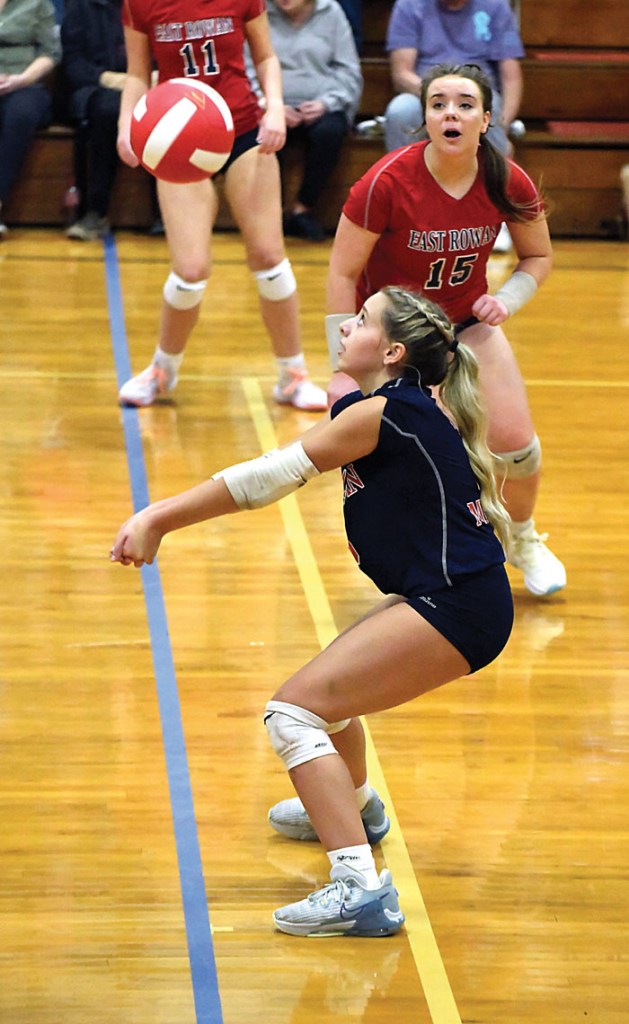 East’s Riley Hill sets during a game against West Rowan earlier this season. photo by Wayne Hinshaw, for the Salisbury Post

GRANITE QUARRY — If you need a ukulele player for your next birthday party or Hawaiian luau, call East Rowan senior Riley Hill.

If you need someone to organize your next fundraiser, call Riley Hill.

Hill, who leads a Bible study group in her free time, is a unique and well-rounded teenager who also found time for athletics.

One of the all-time liberos in the county, she signed recently with Catawba College’s volleyball program.

“It was an exciting day for me because when you’re little and you set your biggest dreams, mine was to play volleyball for Catawba,” Hill said. “I was a huge fan of Catawba volleyball growing up, and I couldn’t imagine anything better than playing for them. I’ve had coaches who told me I could play for a lot of schools, but all I ever wanted was Catawba.”

Hill, who is a foot shorter than some of her teammates at 5-foot-1, has helped make libero — the back-row defensive player who wears a different-colored jersey than her teammates — a glamorous position in Rowan County. Lots of kids may grow up wanting to be liberos because they’ve seen Hill do things they didn’t realize a human being could do.

“Riley has made my jaw drop more times than I can count,” East Rowan coach Sandy Lytton said. “She’s dug balls I didn’t think she had any chance to get to or anyone had a chance to get to. She’ll stand in there against the hardest hits and she covers an amazing amount of ground. She’s incredibly quick. Sometimes it really does look like she’s flying out there.”

Hill’s first athletic endeavors were in the world of gymnastics. That acrobatic background and the physical training that went into it still shows.

She could tumble with the best and she was very good at soccer, but once she was introduced to volleyball around fourth grade, she’d found her sport.

She found out she excelled at the physical aspects of the game, but was even better at the mental stuff.

“The main reason for developing a passion for volleyball was I had an older sister (Baleigh) who was really good at it,” Hill said. “I can remember going to watch Baleigh play in a preseason scrimmage at Catawba, and then Baleigh and I started going to the Catawba games together. I couldn’t get enough of the sport. I had the quickness for it and the drive for it, and the decision to prioritize volleyball was one of the most important decisions and best decisions I ever made. There was no turning back after that. It’s a game I love because you have to be mentally strong as well as have all kinds of skills. And it’s a game I’ve gotten to play for a long time with my best friends.”

Hill has very good hands and there was some thought about making her a setter, but she had her heart set on being a libero.

A team can only have one libero for each match, as that position has certain exemptions as well as certain limitations.

Her heart was in wearing that special jersey.

“Oh, I was determined to be the libero,” Hill said. “Because Baleigh was always the libero.”

Baleigh, who was 5-foot-2, starred for East and played college volleyball for Barton.

Club volleyball is as important for serious volleyball players as travel ball is to softball and baseball players, and Riley got a boost from the clubs — from High Rock Volleyball Club and then Twin City Volleyball Academy.

Hill has never been daunted by her lack of size. She’s embraced being closer to the floor than her teammates. She sees being 5-foot-1 as an advantage for doing her job — which is digging and passing.

She wonders how her 6-foot-1 buddy Leah Hinceman can make so many digs.

She turned in a great career, surpassing 1,000 digs despite a COVID-shortened season. She was a perennial All-Rowan County player.

As a senior she had 486 digs, 46 aces and led the Mustangs in receiving serve.

“On and off the court she was an inspiration for us,” Lytton said. “She was great at communicating on the court, great at reading people.”

Off the floor, Hill was the leader for East’s “Serve for the Cure” breast cancer fundraiser as well as for the “Volley for Warmth” match which piled up blankets to help the homeless through Rowan Helping Ministries.

“Baleigh always put together the decorations and rounded up raffle baskets for the “Cure” fundraiser, so I knew that was going to be one of my responsibilities,” Hill said. “I enjoyed it. Those projects were important to me.”

Hill was East’s “Player of the Match” 11 times during her career, including her last one — East’s second-round playoff loss at North Henderson.

But it was a super senior season for Hill. A senior-filled East team had that breakthrough season everyone had been hoping for. East won 20 times, including a home playoff match.

“There were lots of good teams in our conference, but we beat Carson twice, finished second and had a great season,” Hill said. “When it was over, we knew we’d given it everything we had, and there was some satisfaction in proving to everyone that East could be good at volleyball.”

A physical therapy track is the most likely future for Hill at Catawba, but she loves the game so much that she can see herself coaching volleyball down the road.