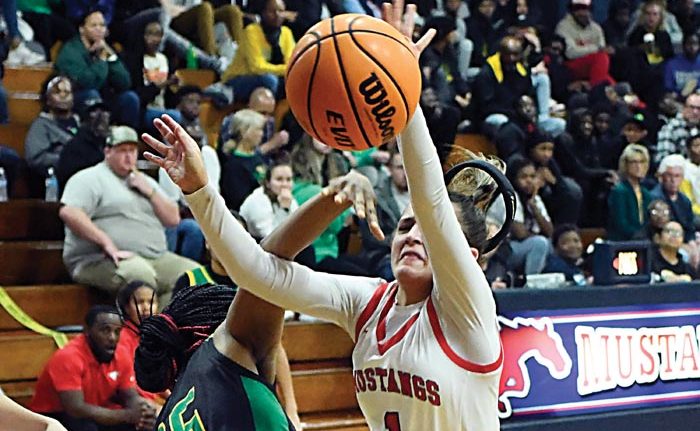 East’s Mary Church led the way with 21 points in Tuesday's victory. File photo by Wayne Hinshaw, for the Salisbury Post

It was the South Piedmont Conference opener for the Mustangs (2-2).

Church, a sophomore transfer from Gray Stone, had, by far, her biggest game of the season.

East had a huge second quarter to erase an early lead by the Knights. The Mustangs led 27-19 at halftime.

Hannah Waddell scored 12 for the Mustangs, while Lindsey Cook had six.

Lake Norman Charter shot 1-for-13 on 3-pointers and shot 32 percent from the field.

CONCORD — West Rowan’s girls stayed undefeated with a 72-47 win at Northwest Cabarrus in the SPC opener for both teams.

The game at Northwest last season included a brawl and suspensions that took the wind out of West’s season, but this time it was all basketball — and all Falcons.

Freshman Tiara Thompson made two 3-pointers and scored 10 in the first quarter as the Falcons took charge. She finished with 17 points.

West led 33-23 at the break and finished strong.

West has a quick turnaround and plays at North Rowan tonight.

It was the first win for the Cougars (1-4) and came in the SPC opener for both teams.

Carson’s girls were shorthanded with one hurt and three sick. The Cougars dressed seven and all seven had good games.

“Super proud of a great team effort,” Carson coach Brooke Stouder said. “We’re continuing to work to get better. This was a big deal for us because many of our players had never won a high school game, including jayvees.”

It wasn’t a perfect night. The Cougars shot 6-for-18 from the foul line, but they’ll take it.

“Winning is contagious and it’s something you have to learn how to do,” Stouder said. “We know we still have a ton of improving to do — starting at the foul line — and we’ll keep working.”

South played some of its best games last season against Central, but that wasn’t the case on Tuesday.

Central led 33-12 at halftime and then blew out the Raiders with an 18-2 edge in the third quarter.

Kynlee Dextraze scored 12 for the Raiders (2-3) in the SPC opener for both teams. Dextraze shot 6-for-6 from the foul line.

“It wasn’t a great start to conference play,” South coach Alex Allen said. “We need to adjust and find our rhythm again. We’ve got a quick turnaround.”