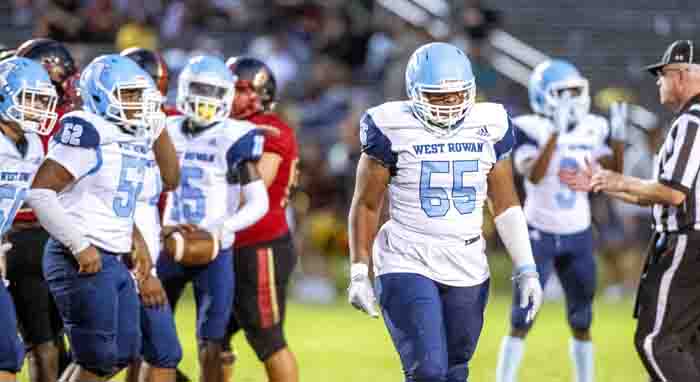 West Rowan defensive lineman Alijiah Gray (55) walks off the field during a game this past season. JON C LAKEY / FOR THE SALISBURY POST. 8/19/22, Salisbury,NC.

“I’ve always loved playing physical,” Gray said recently in his don’t-wake-the-baby voice. “I love tackling and getting sacks and everything that goes with it.”

Now there’s something else. Despite failing to earn a spot on the All-South Piedmont Conference team, Gray has been named Rowan County Defensive Player of the Year.

“I was shocked, actually,” the senior offered during a mid-week interview. “Because I made all-conference last year and thought I played even better this year. But if you look at the guys who did get it — yeah, they all deserved it. They showed what they had.”

So did Gray. He helped the 9-3 Falcons reach Round 2 of the state playoffs by making 87 tackles and adding 12 TFLs, five sacks and a fumble recovery in the regular-season finale against East Rowan. Indeed, a nice basket of oats — and not much to question there.

“Sneaky good year,” was the first answer third-year coach Louis Kraft provided. “When we looked at our season stats, we realized what a productive year he had. Obviously he was noticed, but some of the shine was taken from him by the two defensive ends we had — Hunter Miller and Kevin Toomer. They had double-digit sacks. It’s not that we didn’t notice (Gray), but it’s easier to notice sacks rather than consistent tackles and TFLs. People get paid a lot of money to get sacks.”

Gray’s payday will have to wait. Formerly a two-way lineman, he blossomed into a hand-fighting cheese-grater on the DL who routinely made himself wide, stuffed the run and blew up passing plays. And to think it all started with a less-than-glowing, pre-season assessment from a published source. “A bunch of no-names,” Kraft said. “That’s what we were supposed to be.”

Instead, West launched its season with a fortifying victory at Salisbury, went 5-0 against county opponents, finished second in the SPC standings and earned a first-round playoff win against Franklin.

“There were a lot of times we could have broke,” Gray said. “We could have laid down, but we didn’t. We never stopped. That was the biggest difference. Last year if we got scored on, we’d drop our heads. This year we learned to fight through that — and it helped us win games.”

The Falcons were at their best in October, when they won three straight conference games and yielded just 19 points. Their season ended Nov. 11 with a dizzying, 56-42 second-round loss at West Henderson.

“Not bad, considering we were overlooked at the beginning of the year,” Gray announced. “A lot of people said we weren’t gonna be anything. We were nobodies. It just made us angry, made us want to work harder and win more. That’s what led us to beating Salisbury. It was a statement right there. It showed us all the things we could do.”

It showed Kraft, with pellucid clarity, what a menacing lineman Gray could be.

“Disruption. That’s really all we asked him to do,” said Kraft, an amiable special ed teacher. “He demands a double-team. And when you’re doubling one guy, someone else is going to be left by themselves. You turn on the film and recognize him right away. In practice we couldn’t block him. We’d be running offensive plays, but if he was in there defending, we weren’t doing a whole lot.”

“I want to get playing time and learn from the guys with more experience,” Gray said. “But what I really want is a degree. I want to eventually own a shoe store, like a Foot Locker, and market athletic wear.”

Kraft believes a foundation for success has been poured and expects Gray to sign in the spring — after the pool of transfer portal players has been exasperated. “He’s college-ready, no question about it,” he said. “He’s going to help somebody next fall. We’ve just got to figure out who.”

“It’s a big accomplishment,” he beamed. “At the beginning of the season there was all this confusion. I didn’t know where I was going or how the season would turn out. But as of right now, it’s all joy. I understand if some people still have doubts about me and our team, but everybody in the county knows our name now.”

They do — in part because of a quiet player who made a loud impact.

Thursday: Coach of the Year

Next Sunday: Offensive Player of the Year