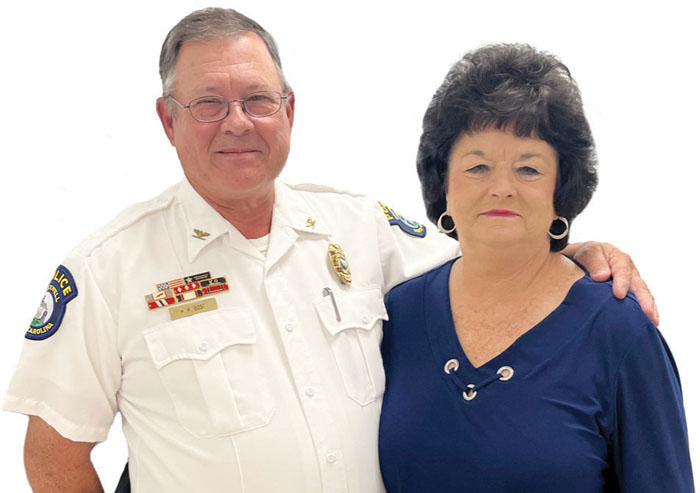 ROCKWELL — Sometimes in life you come face to face with someone and somehow, you just know it was meant to be. Even if you’ve lived in the same town all of your lives.

That’s the case with Sue and Hugh Bost, who were married Oct. 15 after a whirlwind courtship.

Both are lifelong residents of Rowan County. Hugh is the former fire and police chief of Rockwell, a 45-year special deputy with the Rowan County Sheriff’s Office and a hard-working member of family-owned Rockwell Radio and Electric. Sue, formerly Choat, has run her own catering business, Catering by Sue, for more than 20 years.

Over time, their paths crossed professionally when Sue would cater an event for one of the organizations Hugh was a part of.

“We knew each other enough to say hello,” Sue said.

And then COVID entered the picture and hit them both hard. Sue’s husband of 38 years and Hugh’s wife of 41 years both passed away from the illness.

“I wasn’t looking for anyone,” said Sue. “I just thought this was how life was going to be and buried myself in work.”

Hugh stopped in Sifford’s Service shop one day and Derek, who runs the shop, asked if Hugh was OK.

“I said yes and no,” said Hugh. “My dog had recently passed and I said I just didn’t have a reason to go home. Derek said I needed a woman in my life, and I said, ‘Well, what do you suggest?’ And he mentioned Sue Choat. He said she came into the shop often and next time she came in, he’d approach her about it.”

At least a month went by, and Sue was on her way home one day when she passed a serious accident involving a neighbor. She was informed the woman in the accident had been airlifted from the scene, and Sue, knowing the woman had a dog that might need to be taken care of, went back to the scene to offer help with the animal. As luck would have it, Hugh was the one who approached her car.

“I’m standing there looking at her and I don’t know what to say,” he said. “I hadn’t heard back from Derek so I didn’t know if he’d asked her about me and she wasn’t interested or if he just hadn’t asked yet.” Finally, he threw caution to the wind and asked if she might like to share a meal sometime, and if she would share her number. Sue agreed, and when Hugh typed in the number, her contact came up as already entered. He realized he had her number as a work contact.

Sue, meanwhile, put Hugh’s number in her phone, but she thought, “I’m never going to call him, I don’t call men.” When she went to change the contact, she hit the number and her phone called Hugh. She immediately hung up and hoped he would not see it.

“About 11 that night I looked at my phone and saw I had a missed call from her,” said Hugh. “And I was really happy to see that. I wasn’t sure I should call back so late, but then I decided she had called me, so I’d call back.”

The two talked for more than an hour and a half that first night, but there was a small stutter step.

“I told her I was so glad she had called, and she immediately said ‘oh no, that was an accident, I didn’t mean to do that.’ And that kinda deflated me for a minute. But then I realized what a great conversation we’d had, and I was OK.”

The pair talked on the phone for several weeks before their first dinner out.

“He called one Sunday and asked if I’d like to have dinner, but he’d had some eye surgery and couldn’t drive yet,” said Sue. “He said I’d have to pick him up. And I said OK.” The two arrived at Cracker Barrel sometime between 7:30 and 8, and the restaurant closes at 9.

“We talked, and talked and talked, and then all of a sudden we looked around and realized there was no one left in the restaurant but us,” said Sue. “We had kept them there a whole hour after closing. We apologized to the staff profusely, and they said we looked like we were having such a good time they didn’t want to interrupt us.”

From that point on, the two spent more and more time together. Hugh retired from his position as police chief and from the sheriff’s office on Aug. 31, and immediately stepped in to lend a hand in the catering business.

Sue still does most of the cooking, and she built a commercial kitchen on her property years ago so they have the space and equipment for the full-time business, but Hugh says he can indulge his OCD and is having a grand time.

“I told him I couldn’t afford to pay him to work for me because he’s so precise, we gotta speed things up a bit,” Sue laughed. But the plates he designs are often the best looking, she conceded.

Sometime in May, they were at Olive Garden having dinner, and during the conversation, Hugh asked Sue if she would marry him. It caught her by surprise, but she did say yes, and he “put a ring on it,” as they say.

Finding a wedding date was not quite a simple.

“He said he thought we should get married this year,” she said. “I told him that was going to be hard, because I was so busy. So he took my appointment book and looked in it, and said, ‘You don’t have anything on Oct. 15, so that’s going to be our wedding day.’ And it was.”

The ceremony was simple, and the two were surrounded by loving friends who have, they both say, been nothing but supportive.

“My friends told me they knew I had not been OK, and they were worried about me, so they have been nothing but excited for me,” Sue said.

“You look around and you have this nice warm feeling,” said Hugh. “It’s the best thing to happen to me. We’ve both worked all of our lives, so at some point we will take some time to travel and see places. But right now, we are just truly enjoying ourselves. Life is what you make of it. You know, it’s like a book — it has many chapters, and one chapter can be very different from the next. You can choose to close the book at the end of one chapter and not read anymore, or you can turn the page and start the next chapter.”

“We have friends who say to us again and again that Hallmark is going to be calling us any day, because our story is the perfect movie,” said Sue.

Sue was contracted to provide catering services at the recent retirement celebration for Rowan County Sheriff Kevin Auten and a number of retiring deputies, and Hugh was right there by her side at the event. He was also front and center for a moment when Auten recognized his 45 years of service to the department.

“I’d be lying if I said I didn’t miss the camaraderie and friendship, but I certainly don’t miss the stress,” said Hugh. “I’d much rather spend my days in the kitchen with Sue.”