Next Generation Defenders 7U national champs 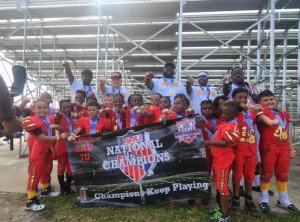 Juke Harris had 25 points, 12 rebounds, four steals and two assists for the Hornets (3-1).

Salisbury plays its first home game on Wednesday against Albemarle.

Augusta’s women’s baskeball team pulled down 20 offensive rebounds and overpowered Livingstone  67-50 on Saturday in a game played in Christenberry Fieldhouse.

GARS members played at the  Revival at the Crescent.

Larry Petrea shot a 75 to win low gross, while Clark took low net. Wayne Bost was the Super Senior winner with a net of 68.59.

Troy wrapped up the season at 18-13 with a loss to UT-Martin in the National Invitational Volleyball Championship.

Troy’s Tori Hester (West Rowan) had 19 kills with only one  hitting error and had nine digs.

Changes upcoming from the NCHSAA include an expansion of the dual team tennis playoffs to 64 teams in 4A and 3A and 48 in 2A.

• A maximum hole score of triple bogey for boys and girls golf in reguar season and post-season matches.

• Approved a ticket price of $8 for the first girls wrestling regional tournaments.

Salisbury’s Anthony Dodd (DL) was named Lineman of the Year for the CCC.

Thomasville’s Dameyon Gathings is the CCC Defensive Player of the Year. while South Davidson’s Tripp Honeycutt is CCC Coach of the Year.

Northwest Cabarrus’s Eric Morman is SPC Coach of the Year, while Northwest kicker Henry Forrest is SPC Special Teams Player of the Year.

Central Cabarrus’ Adriel Miller is the SPC Offensive Player of the Year, while Concord’s Bryson Overcash is SPC Lineman of the Year.

A.L. Brown’s Ty Woods was named Kicker/Punter of the Year for the Greater Metro Conference.

GMC Coach of the Year is Mooresville’s Joe Nixon.

East Rowan’s Leah Hinceman is the South Piedmont Conference Player of the Year, while West Rowan’s Jan Dowling is SPC Coach of the Year.

Shaffer will be a javelin thrower.

South’s Tyler Downs was named SPC Coach of the Year .

Runner of the Year was Lake Norman Charter’s Lily Yampolsky.